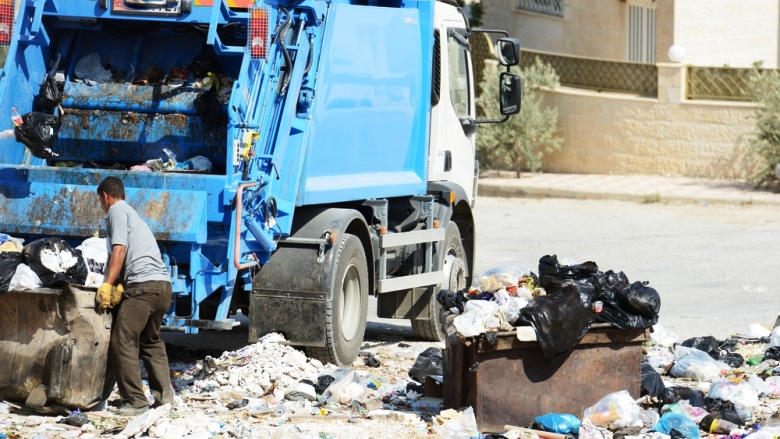 The municipal management of household garbage or solid waste is one of the simplest, most common signs of a working relationship between the state and its citizens. Lebanon’s recent problem—of municipalities leaving garbage to pile up uncollected—has caused public outcry and public demonstrations. It is an example of a failed social contract between the state and its citizens.

It is, as one local youth put it, not just about services: “The root cause of the waste crisis in Lebanon is not technical but political. There is no political will to solve the problem—from one side mainly because of the failure of state institutions and a deadlock in decision making within the cabinet; and from the other, because multiple political actors with vested interests have been blocking any solution”.

This piece examines three countries in the Middle East and North Africa (MENA) region—Morocco, Palestine, and Saudi Arabia—each of which have had a unique journey, both in the way they have learned to manage solid waste and in how this has translated into an important part of the relationship that has evolved between their citizens, local authorities, and national governments.

In Morocco, the reform of the solid waste sector has taken place over the past decade, with its emphasis on public partnership with the private sector and on improving the environment and lives of vulnerable groups of people who make money from picking through household garbage. Before the reform program began, solid waste sites in Morocco were poorly managed. Rivers laced with toxic effluent commonly flowed through towns and into the Atlantic. “Waste-pickers”—the men and women, adults and children trying to make a living from what other people were throwing out—often competed to collect valuable scraps of rubbish from unregulated dump sites without any protection.

As part of the Programme National des Déchets Ménagers, Morocco’s government has been partnering with the World Bank throughout four solid waste, Department Policy Loans (DPLs) for more than a decade. This program aims to increase the ratio of material collected and recycled from 5% of Morocco’s household garbage in 2016, to 20% by 2022, while improving the working conditions of waste-pickers.

A significant part of this was bringing in the private sector to manage important components of the waste collection system. The private operator that runs the Oum Azza site says it is the largest modern sorting and landfilling facility in the Maghreb area, taking in about 850,000 tons of refuse per year. The operator sponsored the creation of a cooperative, and built a sorting facility so that impoverished garbage-pickers could continue to earn money, but in safer, more organized conditions.

About 150 people belong to the cooperative, 22 of them women. Waste pickers who used to forage day and night for scraps, were relocated to the sorting and landfilling facility. Teams extract trash for resale, and green waste for compost, earning a fair wage, health insurance, and even gaining access to small mortgages. By hiring recyclers, operators extend the life of the landfill.

Morocco is focused on maximizing other environmental and financial benefits of responsible waste management, too. At the Oum Azza landfill, biogas from organic waste is captured and, with the support of the World Bank Inclusive Green Growth DPL, will soon be sold to fuel electricity for the national grid. Oum Azza will be the first landfill in Morocco to also sell an expected 50 million tons of CO2 emission reductions.

Palestine is a different story of success—a country caught in a fragile political context, where the mere provision of local services face a myriad of institutional, financial, and logistical challenges. In order to protect public health and natural resources, in the year 2000, local governments partnered with the Bank in the hiring of private sector contractors to close down dumpsites where waste had accumulated, and was being burned off (to get rid of it). They replaced them with a privately operated infrastructure, one that is lasting and scalable.

A significant amount of progress has been made through the three projects. The first project, in Jenin, is a landfill built to serve a population of 600,000 in the Northern West Bank. This landfill, the first of its kind in the Middle East, is equipped with automatic billing and weighing equipment. It is managed alongside online tools for citizen engagement that make transparency possible and increase public awareness of local landfill capacity.

Following the success of the Jenin project, the Al Minya landfill was built in the Southern West Bank, and currently serves 840,000 residents across 33 municipalities. A number of benefits surround this project, including recovering land values, recycling and recovery operations, an online and SMS citizen engagement mechanism, and service monitoring using geographic information systems.

Even more importantly, waste-pickers at the site earn an income as part of a sustainable livelihood program that provides equipment, scholarships, and small business opportunities. This landfill is one of the first World Bank Group (WBG) projects to pilot results-based financing in which subsidies are tied to service delivery by the waste collector, creating a feedback loop that has motivated customers to pay for the service to continue. It is also the first solid waste facility in the West Bank to be operated by a private firm.

Looking ahead, a third World Bank project is beginning to build a modern waste collection system to serve 750,000 people in the Gaza Strip. Nearly half of Gaza’s population should receive sustainable waste services through this, with living conditions anticipated to improve accordingly.

In Saudi Arabia, the government is increasingly concerned with the problems faced by the waste management sector. In 2014, at the government’s request, the Bank conducted its Comprehensive Study on Waste Management in Saudi Arabia. This identified the problem that waste management in Saudi Arabia fails to meet the standards expected of an advanced economy. Quantities of waste are rising, and there is an urgent need to act, both to reduce environmental and health risks, and to control rising costs.

The study made a number of specific recommendations that were reviewed and accepted by government stakeholders. As a result, the government asked the Bank to help it develop a National Waste Strategy to advance the study’s recommendations. A draft Waste Strategy was developed that sets out a strategic direction for solid waste management and proposes a series of interventions to improve the technical, financial, and environmental performance of waste operations in keeping with good international practice.

The strategy examines what happens to municipal, commercial, and industrial solid waste, and medical and agricultural solid waste, including hazardous waste. It is based on an integrated solid waste management approach that determines that waste should be minimized, recovered, and reused where economically feasible, and that where it must be disposed of, disposal should be in engineered facilities with good environmental controls.

The Bank will also support the Government of Saudi Arabia to develop a demonstration waste project on a commercial scale to demonstrate how the private sector can be engaged in an environmentally sound and cost efficient waste treatment and/or disposal facility. Low oil prices and Saudi Arabia’s ambitious reform program add to an opportunity to improve efficiency and cost recovery mechanisms in the sector.

Back to Lebanon, where civic engagement has been galvanized by the topic of waste management. The inflow of over one million refugees from Syria means Lebanese municipalities have been under increasing pressure to provide services with their limited resources.

With this has come a youth movement, raising public awareness and lobbying for political buy-in to change a solid waste management system that has not altered in many years. Paul Abi Rached, one of the activists involved in it, summarized it as follows: “We believe that all elements of the solution [to the garbage crisis] are present. What is left to do now is for all parties to shy away from bargains, from monopoly, and from over-centralization in order to make Lebanese people proud of their country.”