Morocco Lets Nothing Go To Waste 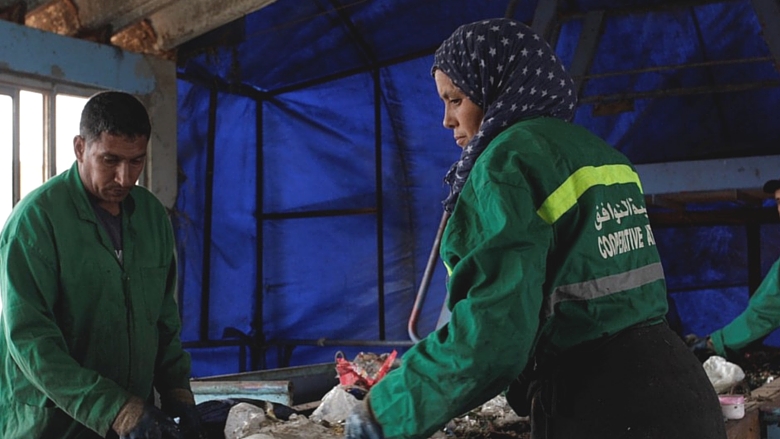 Scavengers have always known there is value to be found in trash.

Twelve years ago, when Milouda Haimar’s elderly husband became too ill to work, she turned to the trash mountain near her home. At night, when her six children were in bed, she would strap a flashlight over her headscarf and join other scavengers picking through the refuse of Rabat, the capital city of Morocco. The most valuable finds were copper, followed by aluminum, hard plastic containers and cardboard. Milouda says she could make about 120 to 250 Dirhams* a night, barely enough to provide for her family.

But the trash heap was unsafe. Men, women, elderly people and children competed for the best finds and went through the trash without gloves, in the rain and blinding sunshine, day and night. Moreover, the trash was located in an old quarry that operated without regulations or oversight from 1980 to 2007.

“It used to smell terrible, with streams of toxic leach flowing into the Bouregreg (the river that runs through Rabat). There were walls of black or white foam blocking the road at times” remembers Gerard Prenant, Director of the private operator that manages the Oum Azza waste management site.

Today, the Bouregreg estuary which discharges to the Atlantic Ocean, is clean enough to attract fishermen and tourists. And Milouda and her fellow trash-pickers have been relocated to a modern facility, the Oum Azza waste management site, where they operate a one-of-a-kind recycling cooperative. This is partly thanks to Morocco’s Programme National des Déchets Ménagers, through which the Government intends to increase the rate of material collected and recycled from 5 percent today to 20 percent by 2022 while improving the conditions of waste pickers. This Program has been supported by four consecutive World Bank Municipal Solid Waste Development Policy Loans (DPL).

The private operator that runs the Oum Azza site says it is the largest modern sorting and landfilling facility in the Maghreb area, taking in about 850,000 tons of refuse per year. It sponsored the creation of a cooperative and built a sorting facility to help people like Milouda who used to work at the makeshift site, continue earning money but in safer and more organized conditions. About 150 people belong to the cooperative, of which 22 are women.

The members are organized in teams that pick out different types of recyclables on a conveyor belt. “Everyone is paid the same monthly salary of 2,620** Dirhams a month,” explains Yassine Mazzout, President of the Cooperative At-Tawaffouk (which means Success in Arabic), and any excess profit is shared once a year according to the number of hours each one has worked. “Although I make a bit less money than before, there are other advantages,” says Milouda. Cooperative members receive health insurance, access to a bank account and a low mortgage.

The trash pickers also contribute to the business model. The on-site recycling plays an important role:  by extracting about 2,200 tons of solid trash per year for resale and turning about 100,000 tons of green garden waste into compost, the cooperative reduces the volume of trash that needs to be buried and prolongs the site’s life expectancy.  Yassine would like to recycle more waste and help trash pickers in other cities, like Agadir, get organized.

" What Morocco is doing is exemplary. They are looking at waste as a resource rather than trash. The Oum Azza site is a promising model of what other landfills can and should look like with the roll out of the government program. Combining recycling, value chains and jobs is a good recipe to make the dump story a success story. "

The Oum Azza landfill is also set up to derive value from organic waste, which represents a large share of the trash in Morocco (about 60%, compared to 30% in Europe), by tapping into the biogas that results from the process of decomposition. Tubes and spigots will one day convey gas to a nearby cement factory furnace. At the time of the site visit, in October 2015, the operator running Oum Azza was waiting for the adoption of a decree that would allow it to sell excess electricity generated by the biogas to the national grid. Shortly after, the decree was adopted as part of a package of reforms supported by the World Bank Inclusive Green Growth DPL.

For now, the gas is flared, converting methane, a gas that has a very high greenhouse warming effect, into carbon, which is relatively less polluting for the earth’s climate. Oum Azza will be the first landfill in Morocco to sell Carbon Emission Reductions through the Clean Development Mechanism program supported by the World Bank. During its lifetime, the site will generate about half a million tons of CO2 emission reductions through the capture of landfill gas and its use to generate electricity on site.

The landfill operator also has plans to create green compost from garden waste and to sell dry and pulverized trash to cement makers. “Our job is to manage waste, and our interest is in having the least possible trash to bury,” says Prenant.

“What Morocco is doing is exemplary. They are looking at waste as a resource rather than trash. The Oum Azza site is a promising model of what other landfills can and should look like with the roll out of the government program. Combining recycling, value chains and jobs is a good recipe to make the dump story a success story” says Maria Sarraf, Lead Environmental Economist at the World Bank.