Sidie, a lab technician in Sierra Leone, was infected with Ebola when he took a blood sample from a 4-year-old boy.

April 7, 2015 – Sidie, a lab technician in Sierra Leone, covered himself, from head to toe, in protective gear that left no skin uncovered. With syringes in hand, he asked the mother once, twice, five times to hold her 4-year-old son so he could take his blood. But as she lay near her 8-year-old daughter, he realized that Ebola had already taken her. Her daughter would soon die, too.

He held the boy and began taking his blood. Three milliliters filled the syringe, with just a few more to go. Then the boy pulled away with the needle still in his arm—and blood sprayed upward, leaving a droplet on Sidie’s forehead, where his face mask had slipped down his sweaty brow.

“I’ve already been infected,” he thought at that moment. He had safely taken blood samples from about 100 suspected Ebola patients, but, this time, all it took was one drop.

A week later, Sidie, 49, started aching. Then he lost his appetite, and battled a headache, hiccups and extreme thirst. A lab test—the one he had administered so many times—confirmed that he had Ebola.

Sidie is one of 891 health workers who have contracted Ebola in Guinea, Liberia and Sierra Leone since the start of the outbreak, which has taken more than 10,000 lives and led to more than 25,000 infections. Throughout the crisis, health care workers like Sidie have been on the frontlines, risking their lives and livelihoods to end Ebola and restore essential health services in the hardest-hit countries.

On this year’s World Health Day (April 7) and during World Health Worker Week (April 6-10), many are paying tribute to their heroic work, as well as to the foreign medical teams that came to Guinea, Liberia and Sierra Leone to lend a helping hand.

Before Ebola, the three hardest-hit countries already had a severe health worker shortage. Liberia, Sierra Leone and Guinea ranked 2nd, 5th and 28th from the bottom among 193 countries in terms of doctors per 1,000 of the population, according to WHO. In Liberia, for example, there were only about 117 doctors for the entire country of 4.3 million.

Early in the Ebola crisis, health workers were some of the first people to lose their lives. Many treated patients without wearing protective gear, unaware that they were helping people who had Ebola. Some of the symptoms of Ebola mimic other diseases, such as malaria—but Ebola is transmitted through direct contact with blood or bodily fluids.

Redemption Hospital in Monrovia, Liberia, where the capital city’s first case was admitted, was one of the first health facilities to lose health workers. A doctor, nurse, a physician’s assistant and a well-known Ugandan surgeon died there after contracting Ebola, some from treating fellow health workers.

Dr. Mohammed Sankoh is the medical director of Redemption Hospital. During the height of the Ebola crisis, the hospital faced a health worker shortage because some stayed home, fearing they would lose their lives like their colleagues. Because of the influx of Ebola patients, the hospital shut down in-patient services including maternal and child health, surgery and trauma, for several weeks.

“The whole area was infectious and infected,” Dr. Sankoh said.

Making personal protective equipment (PPE) available to health workers and training them how to use the protective clothing, helmets and goggles, as well as the adoption of infection prevention and control measures, have helped trim the number of health worker Ebola infections in the countries. The World Bank Group, through IDA, its fund for the poorest countries, has helped provide PPEs and training, essential equipment, drugs and supplies, plus hazard pay, which has motivated health workers to return to health facilities.

World Bank Group and African Development Bank funds have financed the hazard pay of 6,100 health workers in Guinea, 9,500 in Liberia and 23,500 in Sierra Leone.

“At the very beginning [of the Ebola crisis], many health workers fled,” said Dr. Toure Salematou, the municipal director of health in Matam, Guinea. “Now with the additional pay, they’re coming back. It was very effective in motivating our staff.”

The World Bank Group also is financing death benefits for the families of deceased health workers. When Sylla 58, of Conakry, Guinea, lost his 27-year-old nephew to Ebola, his nephew’s parents and sisters were devastated.

“His passing away was a disaster,” Sylla said. “He was a great support for the family. Everyone relied on him.”

His nephew was an ambulance driver for Donka National Hospital in Conakry. He provided most of the family’s financial support, including paying for breakfast every day for his sister, a pharmacy student.

With the $10,000 death benefit the family received, the family bought a plow for their land and began building a house, investments they hope will sustain them in the long run.

Local health workers in the affected countries have been joined by foreign medical workers, who have helped to treat and care for patients, boost local health capacity, manage Ebola Treatment Units, and resume essential health services for non-Ebola conditions.

Dr. Jonas Tewelde, of Mekelle, Ethiopia, is one of these foreign medical workers. He saw the impact Ebola was having on West Africa and responded to the call to volunteer through the African Union. The general practitioner has been working at Liberia’s Redemption Hospital since February 2015.

“It’s our responsibility to help our brothers in Africa,” he said.

“All of these staff are making huge personal sacrifices,” he said. “A majority of them are working within the red zone on a day-to-day basis, and that’s what’s provided the clinical capacity to support the health system. This has been critical in giving members of the public and those in the affected countries the confidence to recognize that they may have Ebola symptoms and to refer themselves for treatment, knowing there’s safe and effective treatment facilities for them.”

As the countries work to reach zero new Ebola cases and continue to rebuild their health systems, these foreign medical teams are providing mentoring and training to national staff. They will also take newly acquired skills back home, which will help their countries build their own capacity to respond to public health emergencies.

Each of the three countries is facing tremendous challenges in rebuilding their health systems and boosting economic recovery, and will need to make tough decisions in terms of priorities and tradeoffs. One area of potential investment is developing a national health workforce as part of a more resilient health system.

Before the deployment of foreign medical teams in Liberia, C.H. Rennie Hospital in Margibi County had only three doctors. When the Ebola crisis hit, they soon lost one of them—and 13 other staff—to Ebola, including nurses, a physician’s assistant, a security officer, and many others. Seemingly overnight, the hospital was overtaken with Ebola patients—many of them of hospital staff.

The hospital was a “warfront,” said Oretha Puway , 37, a certified midwife and nurse at the hospital.

“They started to die, one by one,” she said of her coworkers.

Eventually, the hospital, the only referral hospital in the area, closed for more than a month in August 2014. As a result, some pregnant women were delivering at home. She recalled an 18-year-old woman who came to the hospital for all of her prenatal visits and was scheduled to deliver around the time the hospital closed. She died at home while giving birth. That woman’s death haunts Oretha.

Today, C.H. Rennie, like Redemption Hospital, is slowly attracting patients to return to the health facility. Because of contamination from Ebola, C.H. Rennie had to burn many of the hospital’s beds and mattresses. The non-governmental organization Save the Children supplied dozens of beds to help restore and improve health services in the county, and 20 African Union foreign medical team staff have replaced some of the health workers the hospital lost to Ebola.

Sidie, the lab technician in Sierra Leone, said he feels lucky to be one of the health workers who survived Ebola, although he continues to face stigma as an Ebola survivor. Many in his community witnessed the ambulance picking him up at his house when he was sick with Ebola. His wife cried in the street and asked him who would take care of the family if he died.

“When I think of that,” he said, as tears streaked his cheeks, “I cry.”

After he returned home from the treatment center on November 10, 2014, his landlord tried to evict him. He also lost many of his friends because of stigma.

And although he continues to deal with post-Ebola medical problems, he, like many other health workers in West Africa, insisted on returning to work. He went back to work on January 15 because he said he had a job to do for his country.

“This is a war that has come to our country,” he said. “You don’t expect a carpenter to take blood from a sick child.” 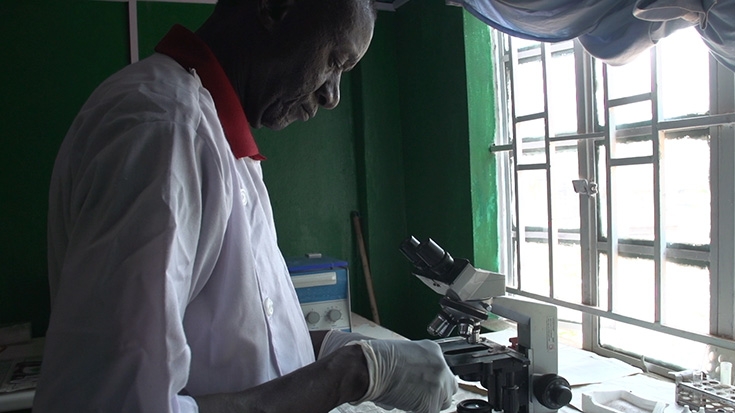