Surviving Ebola in Liberia, Only to Fight Another Battle

By the time she learned its name, her sisters, brother, sister-in-law, nieces, nephews, aunt, and other relatives had bled to death.

Three generations gone with one strain. And then it came for her.

Mouth parched, eyes reddened with blood, vomiting and diarrhea, blistering confusion and “fire in [her] heart,” she said.

But Lina Saah, a 39-year-old single mother living in Monrovia, Liberia, would beat the disease after being carried through the streets to an Ebola Treatment Unit (ETU). She would spend 15 days there and then be discharged on October 7, hobbling home with a limp that now is a constant reminder of the toll Ebola took on her life and the ones she loved most.

Her “graduation” from the ETU came with a certificate confirming that she was Ebola-free, granting her access to a club that five months ago, she never envisioned joining.

Lina is one of 1,534 registered survivors of Ebola in Liberia as of March 3—although the Ministry of Health says there are likely closer to 2,000 survivors of the disease, which as of March 5, had killed 4,162 people in Liberia. There are signs that Ebola could be snuffed out in the country: The last confirmed Ebola patient was released from an ETU on March 5. If Liberia has no new cases for 42 days, it will be declared Ebola-free.

Beatrice Yardolo, 58, of Montserrado County, Liberia, is that Ebola survivor. She and her husband, Steve, 61, lost three children to Ebola. While Beatrice was in the ETU, Steve and others who shared their house were quarantined after Beatrice was taken for treatment on Feb. 19.

“Even your friends are afraid to come around you. It's difficult," Steve said of the stigma of being associated, but not infected, with Ebola.

That stigma is all too familiar to Lina.

Before Ebola, Lina was a mother of four. Now, she’s a mother of six, after taking in her late sisters’ children.

Before Ebola, she leased an apartment where she made a home. Now, because of the stigma of Ebola—even though Lina is cured and has antibodies that make it impossible for her to contract Ebola again—Lina said that her landlady was denying her access to water for drinking and laundry, and was trying to evict her from the property. If she is forced out, she will join 150 other Ebola survivors who have lost their homes in Liberia as a result of Ebola, according to the Ministry of Health.

Before Ebola, on Mondays, Wednesdays and Fridays, Lina went to the University of Liberia to study sociology, with the dream of becoming a social worker by her 40th birthday.  The other days of the week, she sold small things on the roadside to support her children and finance her college tuition.

Now, she has put her social work dream on hold, in too much physical and emotional pain to work. She has no money to send her children and nieces to school. She relies on the World Food Programme and her church to feed her family.

“We don’t have anything,” she said.

Lina’s new dream is for her kids to return to school, and to own a home that no one can take from her.

“I will be happy when my children are in school, and when I have a place to live,” she said, as she wiped tears from her eyes. Even with the tears wiped away, Lina’s vision is blurry -- another Ebola calling card.

The government of Liberia, with the support of partners like the World Bank Group, is balancing the need to protect and invest in survivors like Lina, with a commitment to remain at zero new infections, while rebuilding the essential health services that were devastated when Ebola torpedoed through the country.

Guinea and Sierra Leone, the other two countries most deeply affected by Ebola, continue to face challenges to get to zero, while continuing to work toward providing essential health services once again, and being better prepared for future public health threats.

The World Bank Group has provided $518 million in support from IDA, the World Bank Group’s fund for the poorest countries, to help the three most affected countries get to and stay at zero new infections, and recover and rebuild from the crisis. This includes delivering treatment and care, deploying health workers, tracing contacts, delivering food to quarantined people and helping to reopen schools and support recovery, among other activities.

Photo © Dominic Chavez/World Bank
" When you survive and return, people think that you still have Ebola. "

No Place to Stay

While many of the scars of Ebola are obvious—10,000 people dead in West Africa, schools disrupted, farming interrupted, unemployment—other scars, beneath the surface, need urgent attention. That is why the Liberian Ministry of Health, along with partners, is providing counseling and support for Lina and other Ebola survivors.

After being declared Ebola-free, survivors try to return to their homes. But the process of cleansing the house of Ebola involves destroying almost everything inside. These survivors end up sleeping on the floor or seeking another place to stay—while battling Ebola’s after effects, including post-Ebola syndrome, pain, numbness and visual problems, among others.

Henry Tony was released from an ETU on November 4. He was not welcomed back to his community to live or work. He is not one of the nearly 20 percent of Liberians who had stopped working since the Ebola crisis and have returned to work.

“People no longer associate with us,” said Henry, a 31-year-old Ebola survivor from Monrovia and the co-chairperson of the Ebola Survivor Network. “Contracting Ebola doesn’t mean that I’m no longer Liberian.”

Henry is staying with a friend while he looks for a more permanent residence for his two living children. He is a man without a community—and a man without a wife. She perished from Ebola along with Henry’s 2-month-old son and Henry’s grandmother.

“She was my best friend,” Henry said of his wife.

When Saah Blackie, a 39-year-old shopkeeper and car parker survived Ebola, he hoped that no one would find out that he had Ebola.

“When you survive and return, people think that you still have Ebola,” he said. Saah said that the stigma he faces in his community has led him to shutter his shop and seek counseling.

Some of this counseling will be provided through a recently launched $3 million project by the Liberian government, World Bank Group and Japanese government to address the psychological effects of Ebola in Liberia and to promote psychosocial health in the country. The three-year project is expected to reach about 18,000 people in Montserrado and Margibi counties.

In partnership with UNICEF, the World Bank Group also is supporting mental health in Sierra Leone.

Josephine Karwah, a 28-year-old from Margibi County, has used her experience as an Ebola survivor to help train health workers in local facilities. Josephine’s parents, uncle, two cousins and another relative did not survive Ebola.

Josephine was pregnant when she contracted Ebola. Nine other pregnant women were in an ETU with her. She was the only one who survived, and then returned home. Then, seven months into her pregnancy, she delivered her stillborn baby by herself, on a neighbor’s porch. Even though she no longer had Ebola, no one helped her because they feared contracting the virus.

Despite the great challenges she faces, including now raising six children, five of whom she adopted from relatives who died of Ebola, Josephine has committed herself to helping with Ebola training in health centers.

“The more I help,” she said, “the more people survive.” 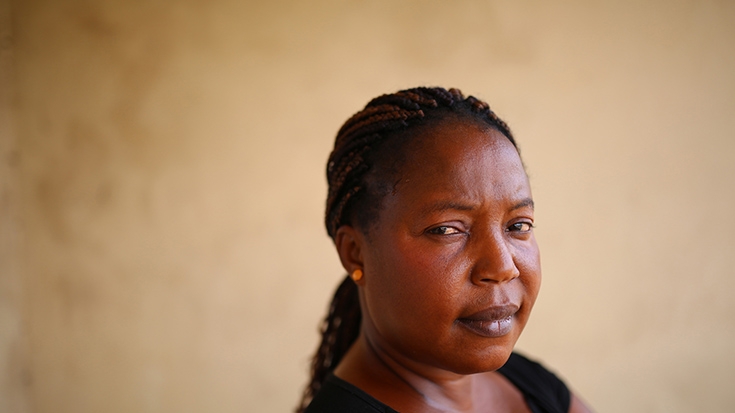