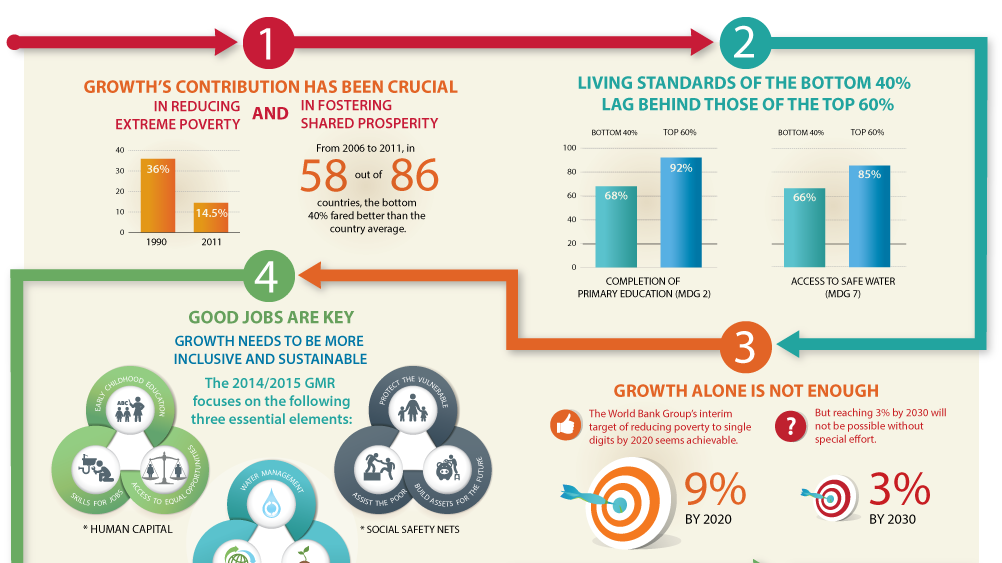 As the 2015 deadline for the Millennium Development Goals (MDGs) draws nearer, the debate within the international community is gaining momentum on two fronts: advancing the unfinished agenda of the current MDGs while developing successor goals. The World Bank Brussels Office made a major contribution to raising the public profile of this debate with the presentation of the Global Monitoring Report (GMR) 2014/15 to a multi-stakeholder audience on October 15 2014.

Released on an annual basis since 2004 by the World Bank Group, in collaboration with the International Monetary Fund, the GMR monitors the world’s progress in achieving the MDGs and related development outcomes. For the first time the 2014/15 edition reported also on the implementation of the World Bank Group’s own twin goals of ending poverty and boosting shared prosperity.

In the presentation, World Bank Group lead author Jos Verbeek outlined the three areas the report deemed necessary to make growth inclusive and sustainable: a) investment in human capital; b) better use of safety nets, and c) environmental sustainability of development. On human capital, Verbeek pointed out that providing good jobs has been one of the most important factors in in lifting people out of poverty. As regards social safety nets, he argued that cash transfers, even when unconditional, have been critical in helping the poor and protecting the vulnerable, particularly in times of crisis. Concerning environmental sustainability, reform of fuel and other energy source subsidies could curb waste in many poor countries and potentially benefit the poor in a direct manner. IMF co-author Lynge Nielsen pointed out that the global economy has largely been conducive to growth in developing countries over the last seven years. However, as the report concludes, while economic growth in those regions where 95 % of the poor live is encouraging, risks are emerging with possible further recessions in rich countries. Still the World Bank Group’s interim target of reducing extreme poverty to single digit by 2020 seems achievable. Gaps in income levels of the bottom 40% have been closing, even if other aspects of their living standards remain much lower than the top 60%.

Panel discussant Felix Fernandez-Shaw (Head of Division in the Development Cooperation Coordination Division in the European External Action Service), while commending the findings of the report, suggested the need for more focus on two elements – ‘togetherness’ and ‘sustainability’. He argued that development aid is no longer the big transformation that we need. Rather the developed and developing world will need to find sustainable solutions together.

Fellow discussant Mireia Villar Forner (Senior Adviser on Crisis Prevention and Recovery at the UN/UNDP office in Brussels) stressed that more effective UN-World Bank collaboration will be needed in delivering on the post-2015 agenda. She added that while the two actors already work together in a number of areas, there are always opportunities to take the partnership further.  A key area of co-operation has been a program in accelerating progress on the MDGs. The two actors have agreed MDG Acceleration Action Plans for eleven countries encompassing a range of MDG targets. This experience demonstrates the two actors’ ability to work together, and will stand them in good stead as the next development agenda is implemented.

Further comments and suggestions put forward by participants at the event during the ensuing discussion included a demand for a better defined role for the private sector in promoting  social inclusion, the need for all actors to better utilize technologies such as mobile phone and the Internet in addressing poverty goals, and the importance of developing better data for monitoring.