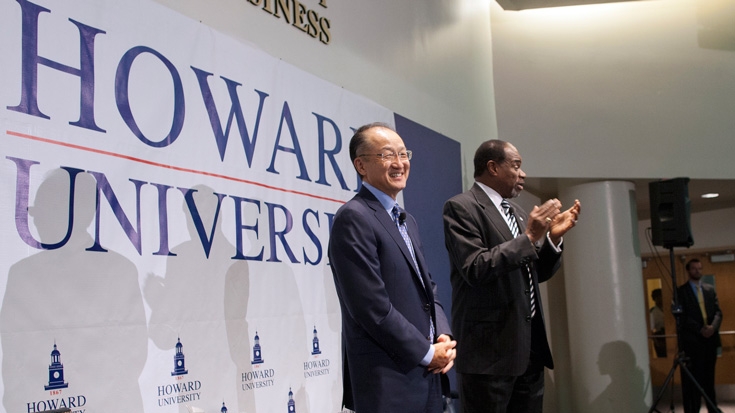 World Bank Group President Jim Yong Kim said boosting shared prosperity for the lowest 40% of income earners in developing countries will improve the lives of all members of society, not only a fortunate few.

“Our goal of boosting shared prosperity will be achieved by raising incomes, creating jobs, educating children and providing all with access to food, water and health care,” said Kim in a speech given in advance of the IMF-World Bank Group Annual Meetings to students and faculty at Howard University on Wednesday. “By doing so, we will grow our wealth and nurture our humanity.”

The president stressed the need to help low-income countries grow their economies. In the last four years alone, high growth rates in China and India have meant that 233 million people no longer live in poverty.

But poorest people in these countries must share in the gains of that growth, he said. Kim cited a recent Oxfam International report that found the world’s richest 85 people have as much combined wealth as the poorest 3.6 billion.

“Shared prosperity is part of the Bank Group’s headline goals simply because it is required to end poverty,” Kim said. “With so many Africans, as well as Asians and Latin Americans, living in extreme poverty, this state of affairs is a stain on our collective conscience.”

The president talked about how the Ebola epidemic in West Africa underlines the importance of addressing inequality. “This pandemic shows the deadly cost of unequal access to basic services and the consequences of our failure to fix this problem,” Kim said.

" Unless we stop the infection’s spread now, there will be little prosperity to share, to say nothing of the number of people who will be unable to share in what remains. "

The Bank Group has transferred $105 million in emergency funding to Guinea, Liberia and Sierra Leone to fight Ebola — more money to date than any other international organization, the president said. Overall, the Bank Group has committed $400 million to support treatment and containment.

The U.S. Centers for Disease Control and Prevention has said that in a worst-case scenario, 1.4 million people could become infected with Ebola.

“We must do all we can to prevent thousands more needless deaths and an economic catastrophe. … Our ability to boost shared prosperity in West Africa — and potentially the entire African continent — may be quickly disappearing,” Kim said. “Unless we stop the infection’s spread now, there will be little prosperity to share, to say nothing of the number of people who will be unable to share in what remains.”

Boosting shared prosperity and tackling inequality requires two key steps on the World Bank Group’s part, said Kim. The first is improving the understanding of how economic growth at the national level impacts development at the household level. This requires better and more precise data from low-income countries.

Secondly, the Bank Group should continue to evaluate the impact of its projects on low-income earners. He gave the example of Bangladesh, where the Bank Group has helped to build and fix 3,000 kilometers of road. In just six years, he said, the average household income in those areas grew by 74% as roads connected communities to markets. Areas that did not have access to these upgrades saw a 23% decline in average household income.

In closing, Kim cited the words of Dr. Martin Luther King Jr., who he called “one of my heroes.” King called poverty “a monstrous octopus” that “spread its nagging, prehensile tentacles into hamlets and villages all over our world.”

“If a man doesn’t have a job or an income,” the great civil rights leader said, “he has neither life, nor liberty, nor the possibility of happiness. He merely exists.” 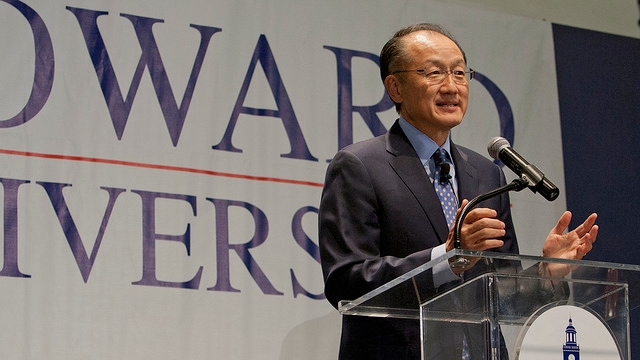