Russia has the largest share of oil, gas, mineral reserves, and agricultural land in the region, and is the biggest hydrocarbon exporter. Azerbaijan, Kazakhstan, Turkmenistan, Ukraine, and Uzbekistan, are also resource-rich and hydrocarbon exporters, while Armenia, Belarus, Georgia, Kyrgyz Republic, Moldova, and Tajikistan are less resource-abundant.

The countries of Eurasia have made remarkable progress since the collapse of the Soviet Union a quarter of a century ago. The transition from communism to market-based economies during the 1990s had been a severely difficult period, with much of the institutional capital of the former republics of the Soviet Union practically wiped out. In addition, their greatest asset – natural resources – had not yet generated large export revenues because additional supplies on global markets initially pushed prices down. This would soon change, however.

At the beginning of the new millennium, the prices of commodities on global markets increased dramatically, chief among them fuels, food, metals, and agricultural raw materials. In 1989, oil prices had been below $30 a barrel, sinking further in 1999 to $15 a barrel, but by mid-2008, prices had reached $130 a barrel, falling temporarily during the financial crisis, and then rising again to above $100 a barrel.

Throughout the 2000s, the surge in commodity prices, especially for oil, brought substantial income to Eurasia and consequently much improvement to the living standards of most Eurasian citizens, particularly the 250 million people in the six resource-rich countries. Per capita incomes increased, social services were restored and pensions paid, education attainment levels rose, life-expectancy increased, and poverty was significantly reduced.

Natural resources have undeniably been very good for Eurasia, but the region must now ensure that its "blessing" does not become a "curse", as has sometimes happened in Africa and Latin America. Despite the recent economic progress, Eurasia continues to face development challenges and there is growing unease about its long-term future. Many leaders in the region are concerned that an over-dependency on natural resources has created a vulnerability to future market fluctuations and a risk of instability. This is especially true for Azerbaijan, Kazakhstan, Russia, Turkmenistan, Ukraine, and Uzbekistan, the largest hydrocarbon exporters in the region.

As a consequence, economic diversification has increasingly been lauded by policy-makers as the solution to reducing Eurasia’s dependency on natural resources – and to safeguarding the region’s long-term development prospects. The policy discourse, however, has often focused heavily on diversification of exports and production, rather than on diversification of endowments through investment in education, infrastructure and institutions.

To prevent their natural resources from becoming a curse, Eurasian economies need to become more productive, more participative, and more stable. Forced diversification of production and trade is not likely to achieve that. Higher education levels, better infrastructure, and efficient institutions that ensure access of all citizens to competitive markets are prerequisites for more productive economies.

Governments in the region should worry less, therefore, about the composition of their exports and more about their national asset portfolios. Balanced asset portfolios are a common factor among successfully developed resource-rich countries.

In this respect, Eurasian countries can learn a great deal from countries like Australia, Canada, Chile, and Norway, which have extensive experience managing their own abundant natural resources. These countries owe much of their successful economic development to investment in a diverse range of assets, including “intangible” assets such as institutions, education, and business enterprise.

Most resource-rich economies, whether advanced or emerging, still rely on their natural resource wealth as an important economic sector in its own right, primarily for export receipts and government revenue. A long-term strategy for diversification should include making use of this income to invest in improved education and infrastructure, as well as in better regulation of private enterprise. Implemented well, such an approach can improve economic performance – stabilizing the economy, boosting employment, and increasing productivity.

Eurasian countries have an opportunity to ensure that diversification is the result – not the cause – of development in the region. By diversifying their asset portfolios, earlier rather than later, they can strike a greater balance between natural resources, built capital, and economic institutions, and help ensure that natural resources – their competitive advantage – remain an important asset for future generations.

"Diversified Development: Making the Most of Natural Resources in Eurasia"

Permanent URL for this page: www.worldbank.org/eca/diversification 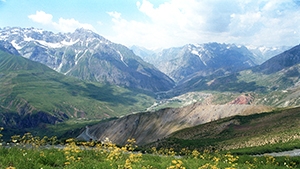