Renewable energy in Turkey. This image in high resolution.

Over the last two decades Turkey has been experiencing rapid economic, population, and industrialization growth – leading to economic and social improvements across the country. These improvements have been instrumental for growth and have led to increases in demands for energy by both industry and households in Turkey. Electricity demand around the country has been increasing by as much as 7-8 percent in recent years, resulting in energy transmission and peak capacity in the country increasing by nearly 60% between 2002 and 2010. Although this increase in energy consumption and intensity has been vital for Turkey’s sustained economic growth, it has also led to increases in energy imports to the country and rising carbon dioxide (CO2) emissions. In response to this situation, Turkey is now embarking on an ambitious path to help ensure that future growth in the country will incorporate an energy sector strategy that is both more economically and environmentally sustainable.

In recent years Turkey has developed several energy strategies that prioritize the local production of energy from wind, hydropower, and geothermal sources by local companies and emphasize the need for improved energy efficiency in the country. With an eye toward its centennial in 2023, the country is committing itself to several ambitious action plans designed to increase power generation from different renewable sources within the country, while decreasing energy intensity and environmental impacts over the coming decade. Two key documents – the Electricity Market and Security of Supply Strategy and National Energy Efficiency Strategy – are paving the way for these improvements by respectively calling for Turkey to meet a target of 30% for renewable energy production in the country and to reduce its energy intensity levels (energy consumption of energy per unit of GDP) by 20% between 2011 and the end of its Centennial year.

With much of Turkey’s energy supply coming from outside of its own borders and fossil fuel consumption in the country on the rise – leading to rising levels of carbon dioxide – this shift toward locally produced, renewable energy and improved energy efficiency represents a potential triple win for the country – simultaneously increasing domestic energy generation, decreasing CO2 levels, and spurring growth among Turkey’s small, medium, and large energy companies. Today, Turkey imports more than 60% of its energy - much of it in the form of fossil fuels - despite an abundance of untapped, renewable energy sources throughout the country.

Although Turkey ranks number one in the world in terms of growth rate for wind energy plants today, it currently utilizes just five percent of its projected total potential in this area. Furthermore, rivers and lakes throughout Turkey represent approximately 140 Terawatt hours (TWh) of economically viable energy potential. The collective utilization of the country’s impressive hydro potential, an additional 20,000 megawatt hours (MWh) of wind-installed capacity, and an expanding geothermal sector represents the cornerstone of Turkey’s renewable energy strategy – which is already helping to boost private sector involvement in energy production in Turkey and is leading to significant reductions in both energy intensity and overall greenhouse gas (GHG) emissions.

As part of this continued push to increase renewable energy production and improve energy efficiency, the World Bank Group is working with Turkey to increase that country's capacity is these two key areas. More than $1 billion in World Bank funding has been leveraged by Turkey for renewable energy and energy efficiency projects, leading to significant increases in energy being produced by privately-owned, renewable energy companies in Turkey - as well as significant reductions in CO2 emissions throughout the country. Over the last decade the amount of electricity being produced by these privately-owned facilities has expanded nearly 18 fold – increasing from 1,490 gigawatt hours (GWh) in 2002 to 26,235 GWh in 2012. Furthermore, projects being developed in coordination with The World Bank Group are helping to reduce greenhouse gases in Turkey by as much as 3.3 million tons every year. 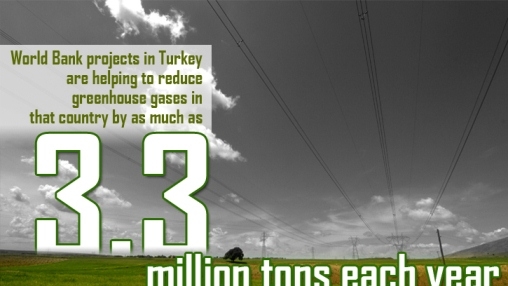 The work in power generation that is being supported by The World Bank Group is also being complimented by ongoing work to improve energy efficiency around Turkey. By prioritizing improvements in energy efficiency measures for small and medium enterprises (SMEs), Turkey is able to boost the competitiveness of these SMEs - by lowering operating costs - while simultaneously helping to further green its economy - through decreases in energy intensity and GHG emissions. The recent Small and Medium Enterprises Energy Efficiency Project represents the latest cooperation between Turkey and The World Bank Group in this sphere. This $201 million project is designed to generate more than 300 GWh in annual energy savings for SMEs across Turkey and reduce CO2 emissions by as much as 154,000 tons by 2018.

Collectively, these actions are instrumental in helping Turkey continue to experience the kinds of economic and social growth it has seen in recent years without forcing it to increase its energy intensity and CO2 emissions. As a result, Turkey is paving the way today for a bright and beautiful bicentennial celebration in 2123.