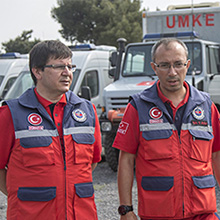 The World Bank in Türkiye

Türkiye has quickly adopted measures to help contain the spread of COVID-19 and save lives, whilst providing economic support to affected firms and households. The economic outlook is more uncertain, than usual and will depend on how quickly this unprecedented crisis can be brought under control.

Turkey: Commitments by Fiscal Year (in millions of dollars)*