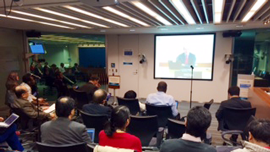 The World Bank issued the twice-a-year South Asia Economic Focus (SAEF) "The Export Opportunity" on October 6, which said economic growth in South Asia is forecast to accelerate to 2016 led by an increase in activity in India, the biggest economy in a region that has the world’s largest concentration of poor people.

According the SAEF, the region’s economy will expand by a real 6 percent in 2015 and by 6.4 percent in 2016 compared to 5.4 percent this year, potentially making it the second fastest growing region in the world after East Asia and the Pacific. The Indian economy, 80 percent of the region’s output, is set to grow by 6.4 percent in fiscal year (FY) 2015/16 after 5.6 percent in FY2014/15. Exports have recently shown a strong export performance in many South Asian countries, the report said, growing in the double digits in several of them. While sales abroad were boosted by favorable tailwinds, such as the depreciation of the Indian rupee in 2013, there are also deeper trends at play. Export diversification by type of product increased, as did the share of emerging markets in total exports. As East Asian labor costs increase, South Asia has an opportunity to become the manufacturing hub of the world; but achieving this will require boosting competitiveness.

Between 2007 and 2009, he also served as the acting Country Director for the World Bank in Vietnam. Prior to moving to World Bank operations, Rama spent ten years with the research department of the World Bank mainly in Washington DC.

Rama gained his Ph.D. in macroeconomics in France in 1985. Back to his home country, Uruguay, he worked in CINVE, the country’s largest think tank, and became one of its directors. In parallel with his World Bank duties, he was visiting professor in development economics at the University of Paris until 2005.
Website