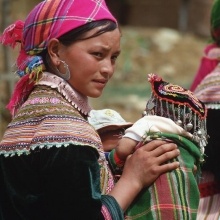 The World Bank In Vietnam

Vietnam’s shift from a centrally planned to a market economy has transformed the country from one of the poorest in the world into a lower middle-income country. Vietnam now is one of the most dynamic emerging countries in East Asia region.

rural residents in Vietnam now have access to all-weather roads through the Second Rural Transport Project.

Vietnam: Commitments by Fiscal Year (in millions of dollars)*

Find out what the Bank Group's branches are doing in Vietnam.