For Mekong Delta Farmers, Diversification is the Key to Climate Resilience 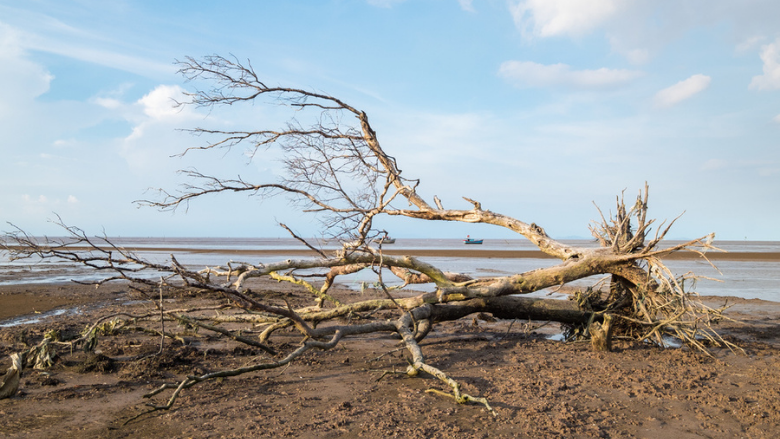 The Mekong Delta, Vietnam’s vital agricultural and aquaculture hub, has it all.  While the Delta has been hailed as a biological treasure and is home to one of the most abundant biodiversity systems on Earth, its ecosystems are experiencing dramatic degradation on many fronts.

The Delta loses about 500 hectares of land per year to erosion, Vietnam’s agriculture ministry estimates. In addition, unsustainable land and water management practices are polluting its labyrinths of rivers and canals. Upriver saltwater intrusion has risen to four grams per liter in places, four times higher than tolerance thresholds for major crops, triggering a region-wide freshwater shortage crisis. While climate change and sea level rise are responsible for some of these changes, direct human impacts such as upstream dam development and over-exploitation of sand and groundwater are also stressing the Delta.

This environmental deterioration threatens the lives and livelihoods of millions of people across 13 provinces.

Since 2016, the World Bank, through the Mekong Delta Integrated Climate Resilience and Sustainable Livelihoods Project, has supported the Government of Vietnam in applying broad policies and operating activities in the Mekong Delta enabling more than one million farmers transition to more climate-resilient and resource-efficient ways of living.

The Delta has four hydro-ecological zones that are connected by water flows, and the project promotes strategies specific to each area. In the upper Delta, the objective is to encourage flood retention, which is vital to alleviating droughts and saline intrusion downstream. In the river’s estuary, the goal is to adapt to increasing salinity. Along the Ca Mau Peninsula, protecting the extremely exposed coastline and addressing water shortage is the priority. 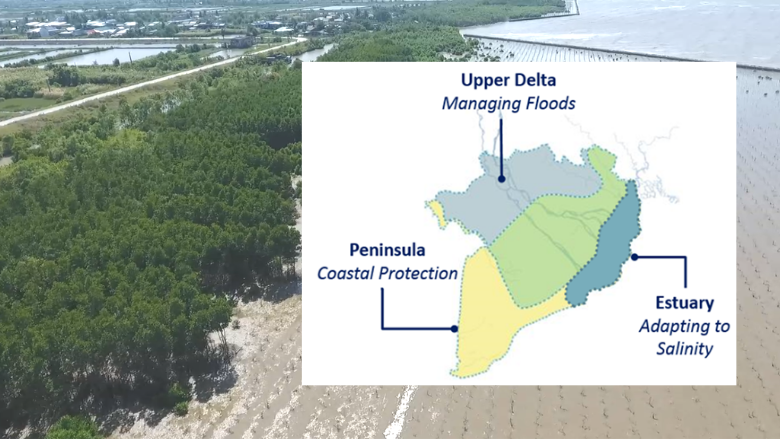 "I do not want to leave home, I want to grow my family here, like my grandfather and my father did. That means I have to be prepared for whatever Mother Nature throws at me."
Nguyen Van Vuong
A farmer living in the upstream area of the Mekong Delta

The project leverages an extensive network of scientists working hand-in-hand with farmers to find new production models that best fit the agroecological and socioeconomic challenges, and scale them up.

For example, farmers in Dong Thap Province were accustomed to growing three crops of rice a year and relied on high dikes to divert floodwaters elsewhere. This practice has proven neither economically optimal nor ecologically sound. Decades of multiple-crop farming systems have depleted soils and disrupted hydrological balances, resulting in lower agricultural activity, shrunken floodplains, and heightened flood risk and pollution.

To transition away from this practice, the project helped farmers to grow other crops or raise other livestock, both reducing their reliance on rice farming and generating higher incomes.

For farmer Nguyen Van Vuong from Tam Nong District, raising ducks and fish was challenging and a financial risk. However, the project helped him by providing 70% of the capital needed to switch to this new model. Vuong also got regular training and on-site support by technical officers. 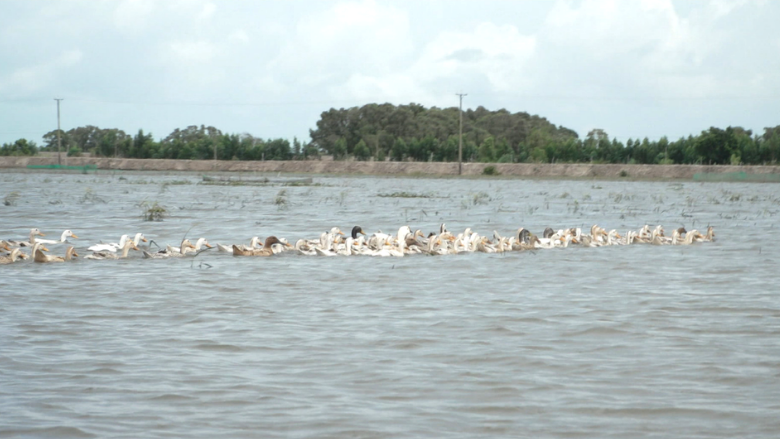 “I was worried because this plan was costly and it was something I had never done before,” Vuong said. “But it sounded promising and there was a lot of help. So I gave this a try I never thought it would pay off this handsomely.”

It is estimated that growing two crops of rice generate an annual profit in the range of 25 to 30 million VND per hectare. With the crop-fish-duck model, this could go up to as much as 81 million VND. Besides providing additional income, these practices help farmers like Vuong retain floodwater, which eases saline intrusion downstream during the dry season.

The peninsula has been suffering from serious coastal erosion and land subsidence as farmers cleared mangrove forests, and as the operation of shrimp ponds over-extracted groundwater and polluted surface water.

Farmers have been shown how to take advantage of mangrove forests as ideal breeding grounds for cultivating shrimp, clams or snails. The rich mangrove ecosystem nurtures this livestock with its food webs and protects them from disease. Shrimp raised this way are often sold at higher prices in European Union markets since they meet organic standards.

For example, in Bac Lieu Province, shrimp growers have adopted a polyculture system by adding tilapia to their shrimp ponds. The farmers have found that this practice brings higher returns and improves water quality.

“Clean water is so important to grow healthy shrimp,” said Le Van Thanh, a farmer in Dong Hai District. “I used to use chemicals to clean my ponds but in turn, it killed a lot of shrimp. Tilapias are so great -- they clean the water and bring extra income.” 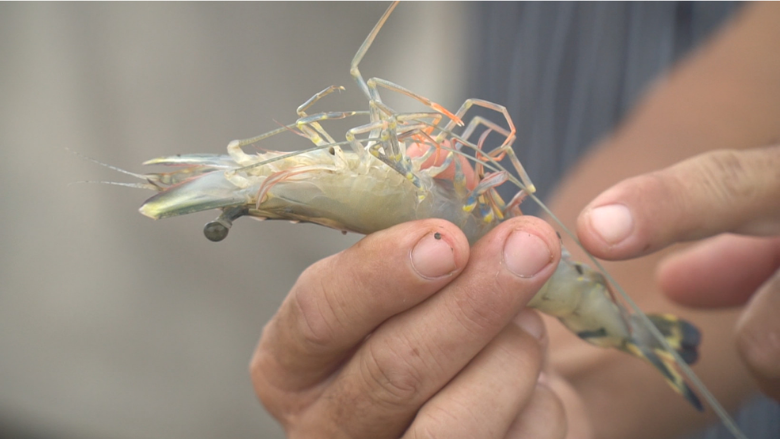 Scaling up with dikes, dams, and sluice gates

The majority of the project’s investment of US$387 million has gone into building new infrastructure and upgrading outdated facilities. In the upper floodplains, 61 kms of dikes have been rehabilitated and 15 associated sluice gates erected to better manage floodwaters, in particular, to capture flood benefits.

Along the 27km coastline of the peninsula, a combination of sea dikes, wave breakers, and mangrove belts have been developed to cope with the ever-shifting coastal dynamics. Sluice gates and other water works have also been constructed and canal systems dredged to better manage saltwater circulation and control high tides that come more frequently. In the estuary areas, four major riverbank and coastal sluice gates have been built to regulate salinity.

The large-scale Nam Mang Thit irrigation system spanning Vinh Long and Tra Vinh provinces is one of the project’s major highlights. Upgrade work was completed just before the historic drought of 2020 hit the region. At the height of the drought in March, the fully functional system helped save crops on thousands of hectares of land. 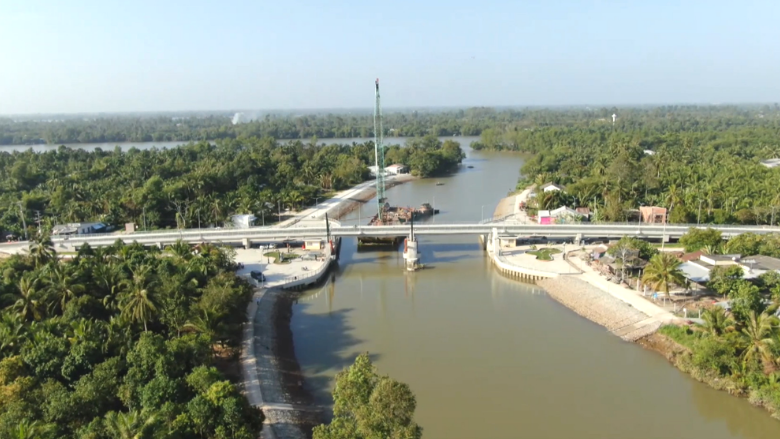 “,” said Nguyen Hoang Ai Phuong, an environmental specialist and the World Bank’s Task Team Leader for the project. “In addition, these infrastructure investments are guided by the growing body of climate science and also by new information from the integrated data and information system that this project is building.”

As part of this effort, the project is supporting the establishment of a Mekong Delta Center, which will serve as a one-stop-shop for information about the Delta’s water, land, resources, and other environmental and climatic indicators. Across the Delta, the project has established 50 monitoring stations that provide real-time updates on water resources and developed a suite of decision-supporting tools to inform the operation of its complex water network.

Importantly, with this project’s support, climate resilience has been mainstreamed into top-level policy documents.

Pending approval by the Prime Minister, for the first time, the Mekong Delta will have a regional master plan that places climate adaptation at the forefront. The new master plan recognizes the interdependence of soil, water, and climate, while promoting an integrated Delta-wide approach to development.

“Collaboration and coordination are key to securing a prosperous and climate-resilient future for the Mekong Delta,” said Phuong. “

For farmers in the Delta, like Vuong, adapting is key to his survival.

“I do not want to leave home, I want to grow my family here, like my grandfather and my father did,” he said.” That means I have to be prepared for whatever Mother Nature throws at me.”