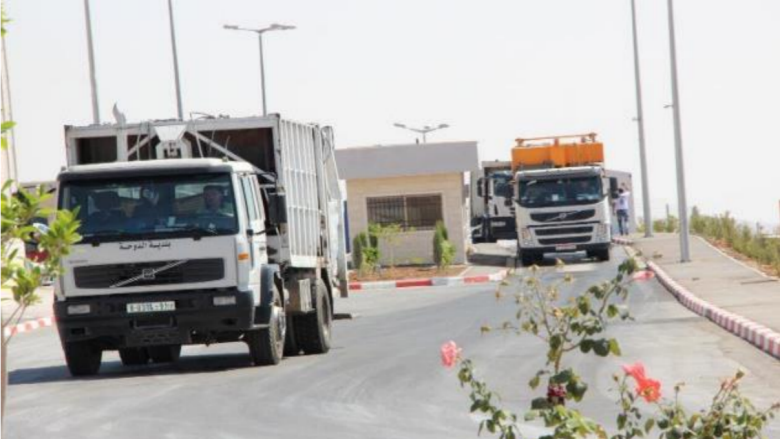 The project helped build a new landfill and improved waste disposal service, directly benefiting 850,000 people. Environmental and living conditions also improved, contributing to a reduction of 160,000 tons of CO2e each year and a 27% reduction in emissions. The project demonstrated effective measures to address fragile livelihoods especially for people who are working as waste pickers.

In West Bank and Gaza, decades of conflict and political instability had left gaps in public services and proper waste collection. The Hebron and Bethlehem Governorates, home to nearly one million residents, generate about 800 tons of waste daily—20 percent of total solid waste in the Palestinian Territories. Most were disposed in unsanitary dumps or burned, illegally, creating health and environmental hazards for residents.

The situation is further aggravated by weakened institutional capacity of local governments to manage public services. The economic crisis facing Palestinian people also limits their ability to pay for public services including solid waste collection and disposal. In addition, the limitations imposed by the signed political interim agreements to access important land called Area C, where Palestinians planned their large infrastructure facilities, posed yet additional challenges to secure construction and operation permits for the new landfill from the Israeli military apparatus controlling the area.

Investments in solid waste management:  The project supported the construction of a landfill facility and associated infrastructure and in partnership with the European Union supplied the needed waste collection and management equipment. The project piloted waste recycling at the landfill and helped rehabilitate existing dumpsite in Yatta (in Hebron governorate) for use during construction of the sanitary landfill.

Strengthen institutional capacity: The project helped reform management of waste at the municipal level including establishing cost centers in the financial ledger that is particular to the waste management service. Public awareness campaigns on solid waste management were also produced at the regional and local levels.

The project also piloted a results-based approach tying subsidies to the delivery of services. If municipalities measurably improve service, they receive a subsidy for the disposal fee charged at the landfill. The approach provides incentives for improving the quality of an essential service which, in turn, affects customers’ willingness to pay for it. This is the first solid waste facility in the West Bank to operate under a Public Private Partnership contract with a reputable international private firm through DevCo, a multi-donor facility managed by the International Finance Corporation (IFC).

Impact assessment showed high effectiveness of the public awareness campaign, covering 75% of the municipalities, and a decrease in illegal dumping. Facilities for resource recovery were established at the new landfill and in one of the transfer stations. Carton, plastic, and iron were sold to local industries while organic waste compost was sold to local farmers.

Environmental and living conditions also improved in the areas surrounding the previous open dumpsites, which suffered from pollution caused by burning of waste. The project helped manage closure and rehabilitation of all 17 dump sites in Hebron and Bethlehem governorates by end of the construction period which contributed to the improvement of the environment and the development of the surrounding areas (land values have increased as a result of this activity). By collecting and disposing waste in a sanitary landfill that captures and prevents the release of landfill gas, the project will reduce 3.2 million tons of carbon dioxide equivalents (CO2e) over the project’s economic lifetime of 20 years. If continued uninterrupted, this amounts to a reduction of 160,000 tons of CO2e each year and a 27 percent reduction in emissions.

The project was financed through the Trust Fund for West Bank and Gaza with a grant of $12 million. The World Bank facilitated the engagement of IFC and its support to the Palestinian Authority in structuring a public-private partnership contract to sustainably operate the landfill. To give private companies the confidence to bid, teams from IFC, the World Bank, and the Global Partnership on Output-based Aid (GPOBA) designed a results-based grant that strengthened the Joint Services Council for Hebron and Bethlehem’s ability to pay the private operator.

Donor partners provided parallel financing: $5.9 million from the European Commission, $400,000 from the Government of Italy, and $350,000 from UNDP and the Islamic Development Bank. Additional grant financing of $1.5 million was also secured from the Partnership for Infrastructure Development Multi-Donor Trust Fund. The Palestinian Authority contributed $2.6 million to the project for land acquisition.

Local stakeholders participated in defining performance indicators, including those requiring the operator to meet the Joint Services Council’s objectives and GPOBA’s criteria.

In 2014, together with its financing partners, the World Bank extended its solid waste management program to the Gaza Strip. The Gaza Solid Waste Management Project helped develop a new system, including a sanitary landfill designed and built in keeping with international standards, and a modern waste collection plan in the middle and southern part of the Gaza Strip. The new system is now operational and is already serving about 750,000 people, nearly half of Gaza’s population.