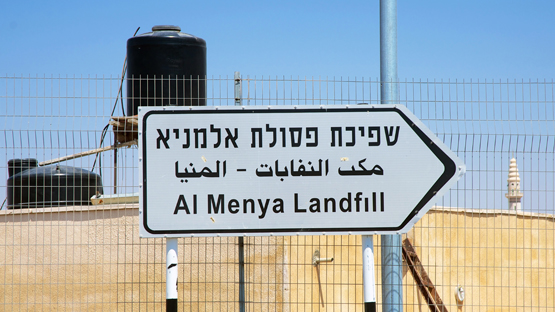 In the West Bank and Gaza, decades of conflict had led to underinvestment in solid waste management. Hebron and Bethlehem, the poorest governorates in the West Bank and home to nearly 1 million people, generate 20 percent of the area’s total solid waste. In 2009, 500 tons of waste produced daily were disposed of in unsanitary dumps, illegally abandoned, or burned. Local governments lacked a sanitary landfill as well as effective revenue administration that could tap citizens’ willingness to pay for waste management. As a result, revenues were not enough to support comprehensive and sustainable solid waste collection and disposal, which endangered people’s health and the environment.

The World Bank mobilized international support to finance construction of the first sanitary landfill in the southern West Bank. IFC structured the PPP to allow a private company to operate the landfill. With the new landfill in operation under an operating contract jointly supported by IFC and GPOBA, service quality improved, and citizens were more willing to pay for services. Local governments were incentivized to properly collect user fees, which made solid waste management services financially sustainable. The Bank also implemented programs to support former waste pickers.

Setting Up the Institutional Framework

From 2009 to 2016, the Palestinian Authority implemented the Southern West Bank Solid Waste Management Project with World Bank funding to improve solid waste disposal services for the communities and businesses of Bethlehem and Hebron. The project raised $28 million from the authority and local governments as well as from the World Bank, Islamic Development Bank, European Union, United States Agency for International Development, and other donors. After establishing the Joint Services Council (JSC) for Hebron and Bethlehem to administer the solid waste management system, the World Bank developed the organizational and technical capabilities needed to operate a cost-effective waste management system.

The JSC used the project funds to construct waste transfer stations, access roads, and the Al-Minya landfill, the first in the southern West Bank. Together, these investments improved waste collection and management practices, expediting the closure of 17 unsanitary dumpsites. The JSC also carried out a public awareness campaign that promoted waste minimization and recycling. Residents who were subsisting as waste pickers were given safety gear and trained to recover items that could be recycled and sold on local markets. The project also improved the ability of the Palestinian Authority’s Environment Quality Authority in monitoring environmental impact.

Financing Solid Waste Management Through PPP and a Results-Based Grant

Upon completion of the Al-Minya landfill in 2013, IFC supported the Palestinian Authority to structure and tender a PPP contract to sustainably operate the landfill. To give private companies the confidence to bid, teams from IFC, the World Bank, and GPOBA designed a results-based grant that strengthened the JSC’s ability to pay the private operator. Local stakeholders participated in defining performance indicators, including those requiring the operator to meet the JSC’s objectives and GPOBA’s criteria.

GPOBA’s $8.3 million results-based grant (the grant was funded by IFC, a donor to GPOBA) allowed the local governments and the JSC, who were the service providers, to receive payments upon proper collection and transportation of solid waste to the landfill. The grant subsidized the fees that local governments paid to use the landfill, which encouraged local governments to use it. In turn, better solid waste management services increased customers’ willingness to pay. The GPOBA program also guided local governments on better ways to structure their revenue systems, such as the implementation of joint billing with other utilities. This also increased financial recovery.

The project established the first-ever service quality and financial sustainability management information system for the area’s solid waste sector. The interactive database will allow local governments to analyze their performance in key areas and pursue improvements in the quality and financial sustainability of local services beyond the solid waste sector.

By incentivizing local governments to use the Al-Minya landfill, the results-based grant combined with the PPP operational contract has made a positive environmental impact, contributing to sustainable disposal of waste, cleaner streets, and the closure of all hazardous dump sites. About 840,000 predominantly poor citizens of Bethlehem and Hebron have benefited from a strengthened solid waste management sector.

Both local governments and the JSC regularly measure the quality and financial sustainability of the service. Local governments have also instituted plans to improve service quality and fee collection rates. Plans include setting up centers where citizens can go to pay fees or file quality-related complaints, and the bundling of waste management fees with billing and collection of other service fees that citizens regularly pay for.

As evidence of strengthening financial sustainability, the fee collection rates and billing-to-cost ratio for services have improved steadily in both governorates since implementation of the results-based grant. The final independent result verification report in September 2017 found that Hebron and Bethlehem now recover around 82 percent of billed fees, compared to 40 percent at the start of the project. The report also verified that the JSC now covers 84 percent of its operating costs through their own revenues. Efforts to close the gap even further in the future are ongoing and include combining more cost efficiency, recycling revenues and national support for reinvestment.

The sustainable disposal of waste has also made a positive climate impact. By comprehensively collecting and disposing waste in a sanitary landfill that captures and prevents the release of landfill gas, the project will reduce 3.2 million tons of carbon dioxide equivalents (CO2e) over the project’s economic lifetime of 20 years. If continued uninterrupted, this amounts to a reduction of 160,000 tons of CO2e each year and a 27 percent reduction in emissions.

IFC designed the first PPP in the West Bank to operate the landfill.