Closing the digital divide in Tonga

Since 2011 the World Bank has been supporting governments of the Pacific to increase the affordability, reliability and quality of information and communication and technology (ICT) access, through the Pacific Regional Connectivity Program (PRCP). The first phase in Tonga has delivered significant benefits for more than 101,000 people – close to the entire population of the Pacific Island kingdom.

Tonga is a geographically remote kingdom in the Pacific region, with a population of just over 100,000 living on 76 islands spread across 700,000 square kilometers of ocean. Prior to PRCP, Tonga was dependent on expensive satellite links for internet connectivity – available to only two percent of the population, with broadband access even lower at 0.9 percent. This limited telecommunications capacity was inadequate to meet the growing demands of a population seeking better connectivity for business and trade, health, education, entertainment and communication with the kingdom’s significant diaspora community.

Through investment in infrastructure and technical assistance, PRCP Tonga reduced the costs of international connectivity (internet and telephone) and strengthened the telecommunications regulatory framework. By doing so, the project has improved the enabling environment for ICT, thus fostering healthier market competition and increasing access to infrastructure and services.

Reduced the average retail cost of broadband internet by 97 percent.

The Asian Development Bank provided cofinancing of US$9.7 million, while the government of Tonga provided an estimated co-contribution of US$6.6 million via TCL, the public-private submarine cable operator.

The delivery of higher quality, reliable and significantly more affordable ICT in Tonga has led to numerous benefits, with the approach of delivering essential infrastructure and supporting the improvement of the regulatory environment now being replicated across PRCP projects in Palau and the Federated States of Micronesia (Yap, Pohnpei, Kosrae), Fiji, Kiribati, Samoa and Tuvalu.

Some time before taking on the role of Director of the Public Health Division at the Pacific Community,  Dr. Paula Vivili was acting superintendent of Vaiola Hospital and Tonga’s only eye surgeon. Early on, Dr. Vivili could see the potential applications for communication technologies, enabled through PRCP Tonga: 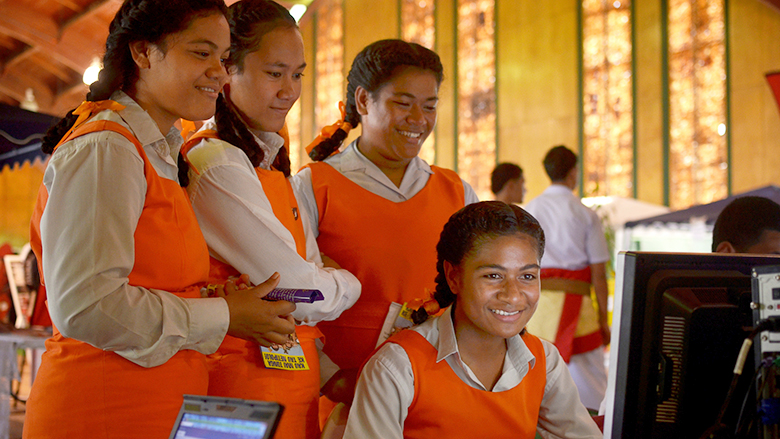