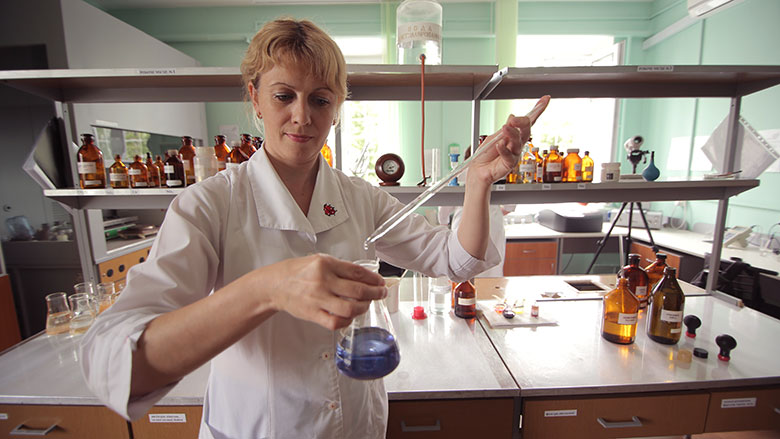 For over 20 years, deep structural bottlenecks and governance challenges have undermined economic growth and macro-fiscal stability in Ukraine. Corruption and entrenched vested interests have impeded critical reforms, as oligarchs continue to dominate large parts of the economy, extract rents, and influence public institutions.

Nevertheless, due to major unfinished reforms, Ukraine still faces weak growth recovery, substantial macroeconomic vulnerabilities (the country will need roughly US$11 billion per year to repay public debt and finance the fiscal deficit in 2019–21), and high poverty levels compared to the pre-crisis period (estimated at 24.5 percent in 2016, up from 14.1 percent in 2014).

These major economic challenges need to be addressed within a highly demanding context, including weaker commodity prices, tighter financing conditions for emerging markets, presidential and parliamentary elections in 2019, and the continuing conflict in eastern Ukraine.

The World Bank Group (WBG), in partnership with other development institutions and civil society, is helping Ukraine identify, design, and advance the most important reforms needed to strengthen the foundations for economic growth and macroeconomic stability.

Through Development Policy Loans (DPLs) and Guarantees, the Bank’s partnership with Ukraine since the crisis has helped advance major policy reforms to strengthen public finances, the financial sector, markets, institutions, and public services. These reforms have been crucial to stabilizing the economy since the 16 percent contraction in 2014–2015 and to strengthening the foundations of economic growth.

International Bank for Reconstruction and Development (IBRD) financing has been built on sustained Analytical and Advisory Services and technical assistance (TA), including: a Systematic Country Diagnostic in 2017; TA in the gas sector that paved the way for the 2017 Gas Guarantee; and TA in the health sector supporting the Health Reform and the Serving People, Improving Health project.

Extensive analytical engagement in the land and agriculture sector informed the drafting of the land turnover law as part of the 2018 Policy-Based Guarantee (PBG) and the forthcoming Programming for Results operation for De-Risking Investment in Agriculture.

Since 2014, the WBG and Ukrainian authorities have worked closely together to address key reform challenges, beginning with two series of DPLs. The ensuing dialogue and analytical engagement helped to deepen reforms under the PBG of December 2018.

Financial Sector: World Bank’s support helped the authorities strengthen banking sector supervision and the Deposit Guarantee Fund and implement the recapitalization of weak banks, which helped in safeguarding depositors and restoring confidence, solvency, and stability in the financial sector. As a result, 94 out of 182 banks have been resolved since the crisis in 2014, notably Privatbank, the largest systemic bank in Ukraine, which was nationalized.

However, weaknesses in the judicial system have undermined the potential impact of the new anticorruption architecture. The authorities, with support from the 2018 PBG, established a High Anticorruption Court (HACC); as of March 2019, judges had been identified (with input from international experts) to serve on the HACC, with cases expected to be under review by mid-2019.

Pension System: Despite high spending, by 2016, the pension system was broken; without reform, the average pension benefit would have fallen to under 20 percent of the average wage and pension costs would have increased to 14 percent of GDP.

The Pension Reform Law, approved in October 2017, helped bolster the average pension benefit to above 27 percent of the average wage (on target to increase to 30 percent in 2019), while pension costs have been maintained at about 10 percent of GDP.

Health Care: The average Ukrainian can expect to live a decade less than her European Union (EU) neighbor. Health financing in Ukraine has for years starved primary care in favor of hospitals and favored inputs over outcomes, exacerbating Ukraine’s most pressing health problems, including neonatal care for women.

In October 2017, as part of the PBG dialogue, the parliament passed a Law on Financial Guarantees for Health Care to address these shortcomings. The share of health spending on primary care is now on track to increase from 12 percent in 2016 to 15 percent in 2019.

Since May 2014, the World Bank has provided a total of US$2.25 billion to Ukraine in the two DPL series (four operations); US$750 million for the 2018 PBG (which enabled the authorities to raise US$1 billion in private financing); and a US$500 million Guarantee to ensure the security of gas purchases.

The investment portfolio as of March 1, 2019, stood at eight operations for total commitments of US$2.25 billion in various sectors, including roads, energy, health, social protection, and water infrastructure.

The International Finance Corporation has an outstanding portfolio of some US$400 million in three priority areas: (i) reform of state-owned enterprises and stronger privatization, (ii) export-oriented agribusiness, manufacturing, and services, and (iii) sustainable cities. The Multilateral Investment Guarantee Agency has a guarantee program of US$35 million in the financial sector and manufacturing.

Coordinated support from development partners has been critical to advancing Ukraine’s ambitious reform agenda. Since powerful vested interests continue to stand in the way of reforms, the WBG has helped to build a reform coalition from among Ukrainian civil society, reformers within the Government, and international development partners.

Financing and technical support from the World Bank, as envisioned by the Fiscal Year 17–21 Country Partnership Framework in close coordination with the International Monetary Fund (IMF), the European Union, United States Treasury, United States Agency for International Development, and other bilateral partners, is central to this effort.

The Bank’s support for reforms through the PBG has been closely coordinated with the IMF’s previous US$17.5 billion Extended Fund Facility program and the US$3.9 billion Stand-By Arrangement approved in December 2018. The IMF program also supports the PBG’s proposed pension and anticorruption reforms, which have been coordinated with the new €1 billion EU Macro-Financial Assistance for Ukraine.

The Bank has also partnered with the European Investment Bank and European Bank for Reconstruction and Development in support of the 2016 Gas Guarantee, expected to expire at end-2019, and is collaborating with other partners to support the Government in addressing the ongoing conflict in eastern Ukraine through the World Bank-United Nations Multi-Partner Trust Fund (MPTF). The Governments of Canada and Sweden have committed financing totaling US$2 million to the Bank’s MPTF window.

IBRD will continue to deepen its support for Ukraine’s reform agenda to strengthen the structural underpinnings of economic growth and macro-fiscal stability. Planned support in FY19 includes a Program for Results operation to help accelerate private investment in the agriculture sector that will both complement and benefit from recent government efforts to strengthen the transparency of agriculture land records and help prepare the market for the end of the moratorium on agriculture land sales.

Work is also underway on a major study of Ukraine’s education system that is expected to shape important reforms in the sector and provide the basis for a results-based lending operation in FY20. The project is expected to address such areas as improving the quality of teaching to meet emerging employment demands; strengthening systems to assess learning outcomes; decentralizing service delivery; and increasing the efficiency, equity, and transparency of educational resources.

The authorities have also requested additional financing in health and social protection to continue strengthening health care funding and to translate the improved targeting of household utility subsidies supported by the 2018 PBG into a broader restructuring of Ukraine’s social assistance programs. Discussion is underway on a second PBG that would be developed to support additional reforms that are needed to support growth, reduce poverty, and address fiscal vulnerabilities in 2019–20.

Ihor Zastavnyi, 29, is a family doctor in the small town of Krakovec in western Ukraine. Since the implementation of health care reforms supported by the Bank, he has experienced many positive changes.

“Earlier, I was writing everything by hand. Now I have an electronic system which is very convenient. Our relations with patients improved as they are not forced to go a pre-selected doctor; they can choose the doctor they trust. Some 1,800 people declared their desire to be my patients, this is the maximum a family doctor can have."

"As I am getting paid for every patient, my salary increased from $113 to $570, or even higher. Because of this new formula ‘Money Follows the Patient,’ our hospital gets more money too. Before the reform, we were getting subsidies of around $30,000 per month, now the hospital gets $56,000. We will use 70–80 percent of this money to pay salaries and the rest to buy new equipment and training. Family doctors want to improve their qualifications as they will gain more trust and will get more patients and provide better quality service. I personally am also going to learn more about examinations to be competitive in family health care.”

A "Hand of Help" for Ukraine’s Internally Displaced Persons (Video)

Why Ukraine’s Education System is Not Sustainable (Op-Ed)