Why Ukraine’s Education System is Not Sustainable

While visiting schools in Ukraine, especially village schools, it is hard to believe that the state spends 6 percent of GDP on education - one of the highest rates of public spending on education in the world. Ukrainian schools often lack adequate facilities, modern equipment or quality textbooks. Rural schools may sometimes lack indoor restrooms, to speak nothing of their outdated classrooms. But this is only the tip of the iceberg; crumbling infrastructure is just the most obvious challenge.

The problems facing the country’s education system go deeper – namely outdated teaching methodologies and low morale among teachers. Both the approaches towards teaching and towards learning are out of date, with students practicing rote recitation without knowing how to use this knowledge in everyday life.  Lessons are overburdened with theoretical knowledge and lacking in practical application, while textbooks are academically dry and overburdened with secondary factual materials – dampening motivation and curiosity among students.

In addition, unofficial payments are common in education. It is not a secret that many schools collect money from parents for classroom remodeling and flowers or gifts for teachers. Some parents also pay bribes to get their children accepted to a school, for better grades, or for mandatory tutoring. These practices adversely affect students’ understanding of fair competition and the need to study.

As a result, not all Ukrainian citizens enjoy equal access to the quality education that has been guaranteed by the constitution. In fact, too many of the country’s schools deepen what is becoming an entrenched cycle of poverty: children from poor families fail to receive the necessary skills and human capital necessary to get a good job and realize real social mobility.

Fortunately, Ukraine recognizes this challenge and appears committed to address it. The new Law “On Education” was a promising start. The critical and longer-term test will be aligning the country’s education policies with its changing demographics, skills required to compete in the 21st century and allocating scarce budget resources efficiently and effectively.  Between 2013 and 2017, budget financing for education shrank from 7.2 to 6.0 percent of GDP. After the steep devaluation of the hryvnia, public education spending declined by 35 percent in real terms over two years. This decline brought Ukraine closer to international benchmarks, though spending on education still remains amongst the highest in the world. Given the aforementioned problems, this is poor value for money. 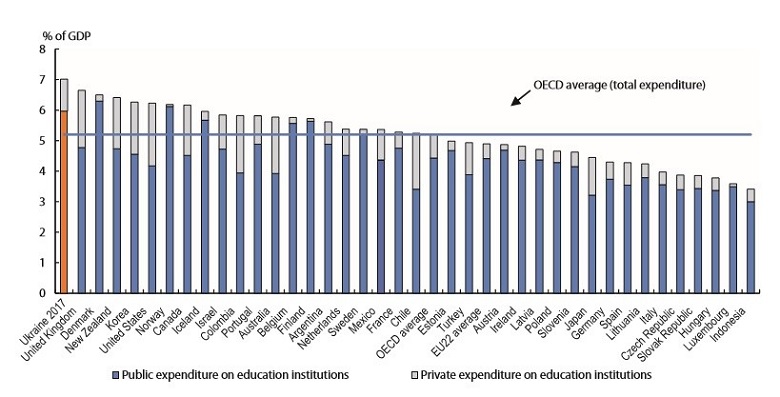 The new law commits Ukraine to spend at least 7 percent of GDP annually on education, without specifying any mix between private and public spending. Such a commitment runs the risk that the efficiency of spending will not improve and the key structural causes of Ukraine’s inefficiencies in general secondary education will remain unaddressed.

Since independence, the number of students in school has declined by 41 percent: from 7.1 to 4.2 million. However, over that same period, the number of schools declined by only 11 percent and the number of teachers fell just 5 percent. This means Ukraine now has 1 teacher for every 9 students, resulting in one of the smallest average class sizes in the world. Maintaining such small classes is a key reason for Ukraine’s high level of spending.

This is unsustainable. There are multiple reasons why the school network has been slow to adjust, but the primary one is that closing schools is a politically sensitive endeavor - as schools are seen as the heart of a community and represent one of the few reliable providers of jobs.

Another, more technical, reason is the muddled nature of the education sector. For instance, until 2016, financing schools was under the responsibility of the rayons (regions), while decisions to close schools were taken at the community level. This meant that a town could choose to keep a school open without being responsible for financing it.

The third reason why the adjustment has moved at a slow pace is poor sectoral and budget management. Although a per-student financing formula was introduced in 2001, it included “adjustment factors” which created incentives for local authorities to create more classes, rather than consolidate classes to improve efficiency. A new and fairer funding formula was introduced in 2017, and will now need to be implemented.

The good news is that most of the reform initiatives in the new law have a relatively low cost in the short term. These initiatives include new textbooks, development of a digital e-learning platform, professional development opportunities, and new equipment for schools, including furniture, learning resources, and computers. Annual costs for these initiatives amount to less than 0.05 percent of GDP.

Reforms also intend to increase the starting salaries of teachers to improve their social status. Already, starting in January 2018, teacher salaries rose, on average, by nearly twenty five percent. However, increasing the starting base salary of a teacher without changing various bonuses and top-ups would increase spending on education to 8.8 percent of GDP -- meaning education will remain fiscally unsustainable. This high spending limits the resources for other public services, such as health care, pensions, and infrastructure. It also limits the resources needed to successfully implement education reform over the longer term, such as the transition from 11 to 12 years of general secondary education, in line with European norms. Ukraine simply cannot afford such a large increase in spending.

Improving teachers’ motivation and status should be a priority for the country, but Ukraine should find ways to do this in a fiscally responsible way. Salary structures should be re-designed so that take-home pay is not divided into the base salary and various top-ups. Paying teachers for individual tasks transforms them into “piece-meal” workers, like those on a production line, instead of into professional educators, expected to do many different and complex tasks. This is unacceptable, and reform is needed.

Moving forward, education budgets could be linked to a multi-year plan which pairs any salary increases with an allocation of teachers and staff that best suits the needs of students and their families. This should adjust the number of schools, classes, and staff to sustainable levels. This process must be gradual and fair, aimed at improving the quality of teaching and the salaries of teachers, while also improving efficiency.

Every Ukrainian teacher deserves decent pay and every Ukrainian child needs a high-quality education. But without equitable and smart spending, Ukraine cannot afford the investments needed to ensure that this happens. Sensible planning and resource management is essential for the country to build the modern education system it needs to become internationally competitive and prosperous.