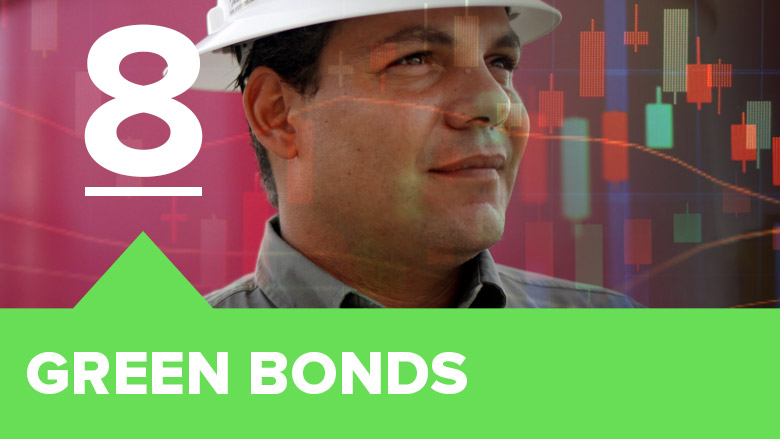 Capital markets can play a key role in mobilizing financing to support the Paris climate commitments. Green bonds are among the financing options available to private firms and public entities wanting to back climate and environmental investments. Green bond issuance is projected to surpass $130 billion this year , compared to $81.6 billion issued last year. Investors are attracted to green bonds because they can invest in climate-smart business and track the impact of their investment through reporting required under the Green Bond Principles.

The World Bank leverages its experience and its position as a market leader in this space to bring greater diversity of issuers and investors to the market, and works with countries to help them put in place market frameworks that support green bond issuances. Most recently, the Bank participated in establishing green financing frameworks that resulted in the first issuance of a green Islamic bond (in Malaysia), and the first issuance of a green bond by an emerging economy (Fiji).

The Green Cornerstone Bond Fund will buy green bonds issued in emerging markets. Initially, the fund will focus on countries and banks that have a high potential to issue green bonds, before spreading into other markets. IFC will also provide first-loss coverage, helping lower risk and mobilizing financing from the private sector. This will help ensure that the fund can operate in challenging markets, including the poorest countries and conflict-affected areas.

The World Bank is also helping countries create new markets for climate finance. For example, Fiji is the first emerging market to issue a sovereign green bond, raising 100 million Fijian dollars, or US$50 million, to support climate change mitigation and adaption. The proceeds of the bond will finance Fiji’s transition to a low carbon economy while building climate resilience. The issuance of this green bond took just four months.

IFC's investment of up to $325 million in the Green Cornerstone Bond Fund will serve to open up the green bond market in client countries by allowing the fund to manage emerging-market debt by purchasing green bonds issued by banks in Africa, Asia, the Middle East, Latin America, Eastern Europe, and Central Asia.