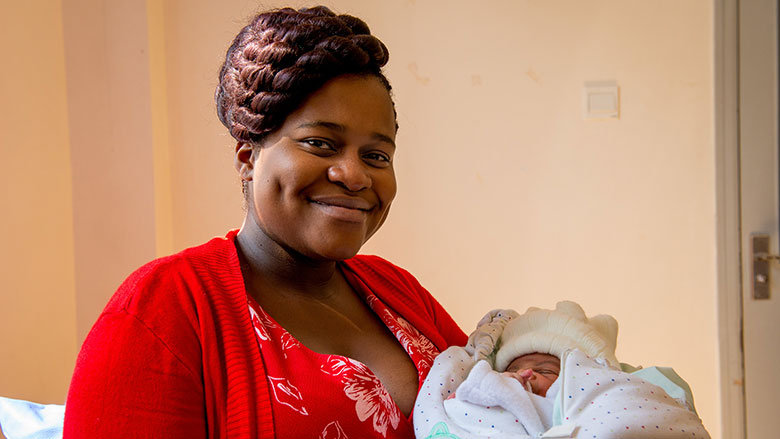 Maternity ward at the Levy Mwanawasa General Hospital in Lusaka, Zambia. Miriam (28) had her second child.  She and her husband Henty already have a three year old daughter. Miriam works as a teacher at a private school, teaching 10th – 12th grade students.

Zambia is a recent lower middle-income country (MIC) experiencing robust economic growth during the commodity boom averaging 7.4% (2004-2014). Since mid-2015, the economy has come under strain and growth has slowed to less than 3% in 2015. Economic growth has been poorly shared and poverty remains stubbornly high with a national average poverty rate of 54%, and rural poverty rate of 77%. Zambia also lagged on a number of Millennium Development Goals (MDGs), particularly those relating to  extreme poverty and maternal and child mortality. The economy is heavily dependent on mining which accounts for 77% of exports. As a result, the country faces an urgent need to invest in economic diversification.

Agriculture: As agriculture is the livelihood of nearly 90% of Zambia’s rural population, improving agricultural productivity, investing in agribusinesses and developing markets is key to poverty reduction.

Health: HIV/AIDS, malaria and tuberculosis are Zambia’s biggest health development challenges.  Malaria is endemic in all of Zambia’s 10 provinces and in both urban and rural areas, and predominantly attacks the most vulnerable populations, accounting for 40% of under 5 deaths and an estimated 20% maternal deaths.

Energy: The big development challenge is access to electricity with only 3.7% of rural households being connected to the grid compared to about 68% in urban areas. Among the Bank’s first projects in Zambia was the construction of the Kariba Dam in 1955, which continues to be the main source of most of Zambia’s electricity.

The government aims to reduce poverty, create jobs and make Zambia a prosperous MIC by 2030. The WBG Country Partnership Strategy (FY13-FY16) is aligned to this goal and specifically supports the implementation of the National Development Plans. Specifically, in line with this aspiration, it focuses on: (i) reducing poverty and the vulnerability of the poor; (ii) improving competitiveness and infrastructure for growth and employment; and (iii) improving governance and strengthening economic management. 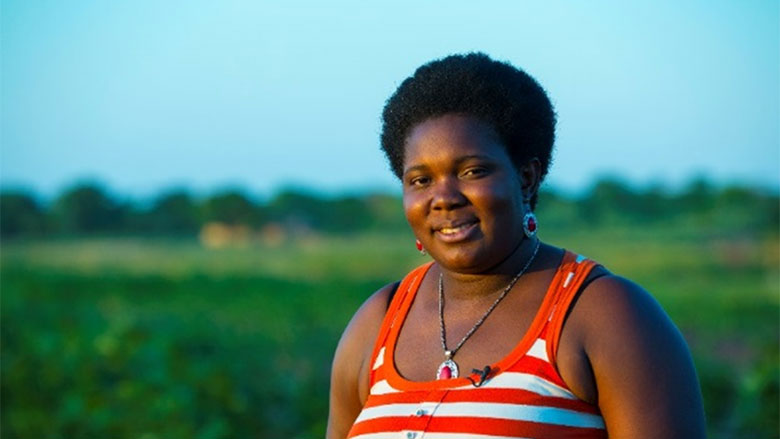 " Now we have access to bigger farmlands because of the rehabilitated canal and the soils around the recovered land in the plains leads to better harvest for them because of the rich peat, alluvia soils farmed under conservation agriculture " 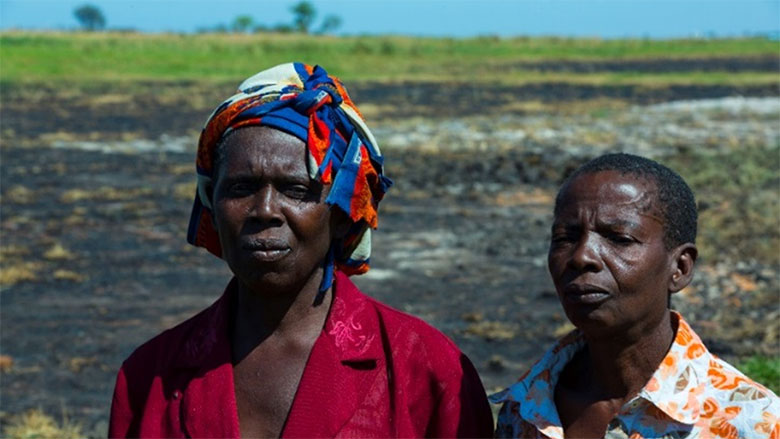 IDA is one of Zambia’s largest provider of official development assistance. As of July 2016, the portfolio amounts to 16 investment projects with a total commitments of $802 million. Characteristic of the Zambia portfolio is a strong and growing share of regional projects (value of  $24m) and considerable trust fund support, e.g. GEF and Carbon Fund (value of $94m). The top three areas of engagement are agriculture (30%), water resources (21%), and energy (19%). The demand for human development support is increasing with social protection, health and education growing in importance. Programmatic knowledge services focus on economic policy, poverty diagnostics incl. mapping and statistics; and jobs through the ‘Let’s Work’ Program. The IFC has a significant portfolio in Zambia consisting of 11 projects, to a total value of $215m. Key areas of investment are agribusiness and financial services as well as manufacturing. MIGA has about $33m in current commitments in Zambia with guarantees supporting machine maintenance, aquaculture, and livestock projects. .

External partnerships are helping deliver on the country program objectives. The Bank and several cooperating partners (CPs) are co-financing the rehabilitation of the nearly 60-year-old Kariba Dam. The WB, CPs and the government also jointly organized a high-level policy dialogue to develop a shared understanding of issues and policies for creating jobs in Zambia. The Bank continues to work actively with the Food and Agriculture Organization and the World Food Program to advocate agriculture policy reform, where progress has been difficult to achieve. The partnership with the private sector is also being strengthened. For example, there is collaboration in a trust-funded project with Community Markets for Conservation (COMACO), an emerging company that is pioneering an innovative way for making markets and conservation work together. Another area is Public Financial Management which is supported by a multi-donor trust fund (UK, Germany and Finland) and implemented by the Bank. The Bank has also collaborated with USAID, Roll Back Malaria partners (Malaria Control & Elimination Partnership in Africa (MACEPA), President's Malaria Initiative, PATH, World Health Organization (WHO), and United Nations Population Fund UNFPA) including the private sector).

" In the past, we would come to the hospital and they would tell us there are no drugs for malaria, but now, malaria drugs are available " 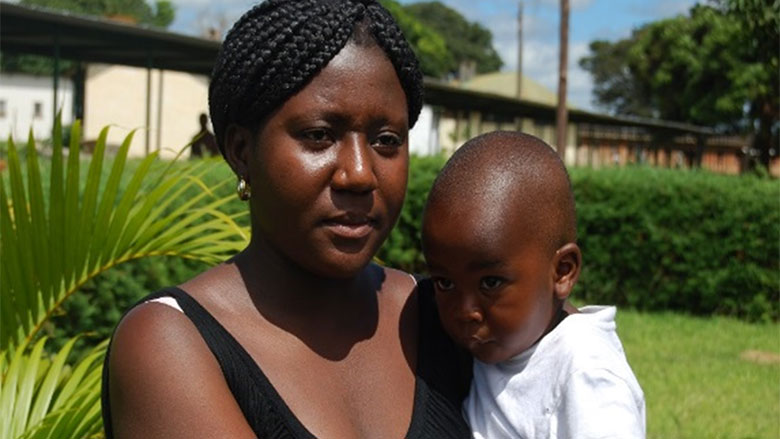 The Country Partnership Strategy will expire in FY17 and a Systematic Country Diagnostic is underway that will help identify the needed transformational interventions to fight the stubbornly high levels of poverty and inequality in Zambia. The upcoming Country Partnership Framework will jointly identify areas of future stronger engagement.

With a freshly elected government in August 2016 facing a full five-year term ahead, the WBG will support the 7th National Development Plan and key macro-economic challenges, most notably the reforms around reducing the fiscal deficit and improved poverty orientation of the public budget. Key projects in the pipeline include: (i) Mining and Environmental Remediation and Improvement Project ($55 million); (ii) Scaling Solar Guarantee ($50 million); (iii) Agribusiness and Trade ($40 million); Integrated Forest Management, including climate smart agriculture supported by IDA, CarbonBio TF and GEF (totaling $59 million),  and (iv) Secondary Education ($40-80 million). In addition, an IDA 17 scale-up operation is under preparation on Rural Connectivity ($200 million), but a key criteria is the level of debt of Zambia that has recently grown.

Saasa Dorcas, Nalolo District, Sianda Canal rehabilitation: Two thousand beneficiaries from our community are able to access more hectares of flooded lands recovered from early drainage for agricultural practices. “The accessible lands allowed us to intercrop maize and cassava. The diversification of crops means we are no longer worried about crop failure and we are also using early maturing maize and drought resistant cassava. We are harvesting more than ever before.”

Rita Nawinyo and Bonvita Nadana, widows: ”Now we have access to bigger farmlands because of the rehabilitated canal and the soils around the recovered land in the plains leads to better harvest for them because of the rich peat, alluvia soils farmed under conservation agriculture.  We are no longer bother with investment in fertilizers.”

Easter Nyambe, Shair for Mbete Island Integrated Fish Farming projects: “In our community, 66 households are benefiting from the integrated fish farming pond. We are utilizing an inherent potential of untapped water resource in natural pond/lagoon. The project manager informed us that there are many of such water pans in several locations in Zambia for the fish culture. Our lives ae not the same we have additional source of income and our incomes have increased too.”

The Malaria Booster Program on the other hand has benefited 6.6 million women directly. The Project supported the government in sustaining progress and effectively responding to an outbreak of malaria cases countrywide through the provision of anti-malaria drugs, Indoor Residual Spaying (IRS), and effective malaria programme management. “In the past, we would come to the hospital and they would tell us there are no drugs for malaria, but now, malaria drugs are available”, Mary Mwango, Kasama Resident