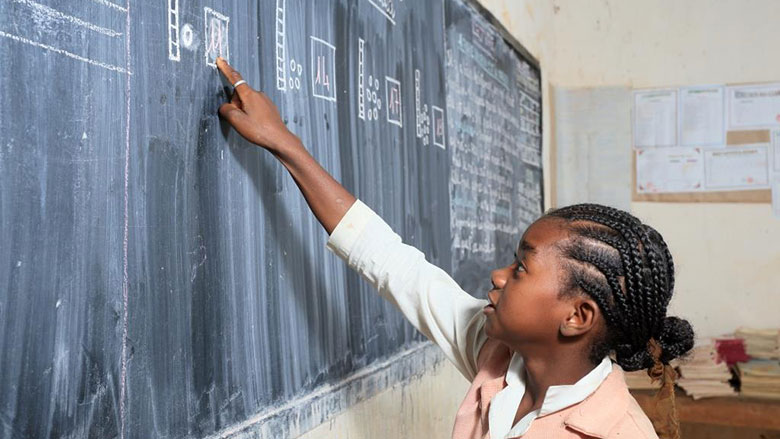 With the support of International Development Association (IDA) and the Global Partnership for Education (GPE), the World Bank contributes to the basic education of 7 out of every 10 children in Madagascar

© Felana Rajaonarivelo/2014/Ambatondrazaka
To alleviate the heavy social and economic toll that repeated political crises have taken on the people of Madagascar, the World Bank is working with the government to help poor farmers increase rice productivity and to ensure that impoverished mothers and their children have access to basic education, health, and nutrition services.

Promoting Inclusive Growth and Access to Basic Services in Madagascar

Madagascar is one of the poorest countries in the world. In 2012, 78% of the 23.6 million population lived on less than $1.90 a day and 90%lived on less than $3.10 a day. The average Malagasy is 42%poorer today than he or she was 50 years ago. More than 80% of the poor draw their livelihood from agriculture, and are the most exposed to weather-related disasters such as flooding, landslides, and erosion. Madagascar has the highest occurrence of cyclones in Africa and is one of the ten countries expected to be the most affected by climate change in the world.

While progress had been made in the 2000s towards achieving some of the Millennium Development Goals (MDGs), it was brought to a halt by the 2009-2014 political crisis. Today, Madagascar has some of the worst outcomes in education, health, nutrition, and access to clean water.

The country is also facing stark economic challenges, despite having unparalleled biodiversity and natural wealth. During the political crisis, macroeconomic stability had been maintained by cutting down drastically on public expenditures and investments. The combination of a low tax collection rate (10%of GDP) and the suspension of most donor activities in a country where international aid represented 40%of the government budget accentuated the impact on investments and service delivery even further. Growth, which averaged 7.4%between 2003 and 2008, plunged to an average of 1.8%per year between 2010 and 2013. The combination of high population growth (2.9%) and stagnant growth caused per capita income in 2012 to fall to its 2003 level.

Coming to grips with the country’s fragility, the World Bank adjusted its engagement during the crisis. It undertook a series of analyses to understand the sources of fragility and to shed light on its impact on poverty and human development. This evidence brought the Bank to focus on two areas: (1) continued work with poor farmers on increasing rice productivity and on connecting them to markets and (2) direct support to the poorest by preserving access to basic services and by piloting a safety net program. The Bank gave preference to multi-sectoral approaches, for example combining interventions in health, education, and nutrition at the community level in the South, the poorest region in the country.

This strategy set a strong foundation for the Bank’s expanded engagement since the end of the crisis in 2014. It is now being implemented on a larger scale, with greater strategic leadership from the government. The end of the crisis also meant that the Bank could be more effective in its engagement with the public sector, and is now able to work with them on core issues of public finance management and decentralization which are critical for the financial and institutional sustainability of development programs.

" Since the cash program, we are able to pay for the children’s school registration fees, their clothes, and food. "

With the support of International Development Association (IDA) and the Global Partnership for Education (GPE), the World Bank contributes to the basic education of 7 out of every 10 children in Madagascar. Together with UNICEF, the European Union, the Japan International Cooperation Agency, Agence Française de Développement, Norway, and the Global Partnership for Education, the World Bank developed a program to address demand-side constraints in access to schooling, to improve the teaching and learning environment, and to provide institutional and capacity strengthening at the government and community levels. To date, the GPE and IDA-funded programs have achieved the following results:

Thanks to an IDA-funded investment project targeting pregnant/lactating women and children in nine of the poorest regions of Madagascar (out of 22 regions), essential services for health and nutrition have been maintained and utilization of those services has increased. Between 2012 and 2016:

In 2013, 400,000 people participated in cash-for-work activities as part of post-disaster responses andMadagascar is successfully evolving from a traditional post-disaster approach to a structured safety net program. Starting in 2014, a pilot conditional cash transfer program was tested among 5,000 families. It is now being scaled up. By the end of 2016, about 40,000 households will receive monthly cash grants as an encouragement to send their children to primary school and another 32,000 will participate in cash-for-work activities designed to enhance communities’ climate resilience. 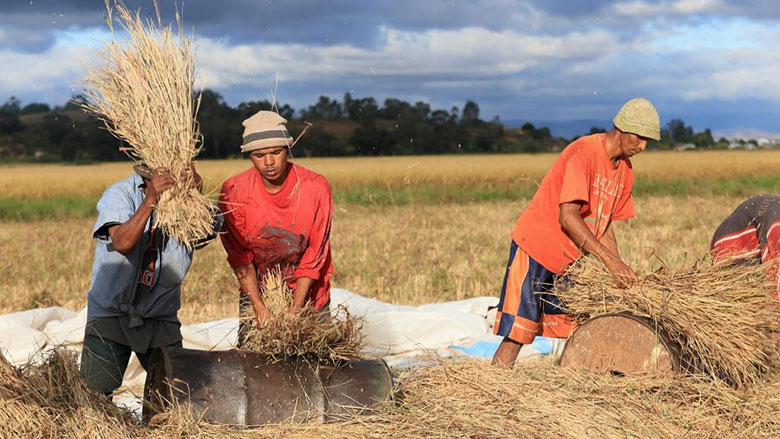 Thanks to IDA-funded investment projects, rice productivity increased from 2.5 tons per hectare to 4.8 between  2008 and 2014 in key rice growing areas, directly benefiting 8,300 farming families.

As of the end of September 2016, the lending portfolio in Madagascar consists of 12 active projects with total commitments of $658 million. This includes $113 million in trust funds (from Global Partnership for Education, the Africa Catalytic Growth Fund, and the Policy and Human Resources Development Fund. Advisory Services and Analytics (ASA) will cover a wide range of sectors, namely in environment, finance, nutrition, energy, urban poverty, education, and agriculture. The total IDA17 allocation amounts to $557 million, including the expanded access under the IDA Turnaround Regime (for FY16-FY17). The FY17 IDA allocation is $227 million, including an expected $20 million from the Crisis Response Window (CRW) to respond to the El Nino drought.

Throughout the 2009-2014 crisis, within the framework of the resolution process led by the Southern African Development Community (SADC) and the African Union (AU), development partners worked closely together to ensure alignment of policy messages and activities, particularly in areas of economic management, rural development, education, health, and transport. This close cooperation continues to this day and since the end of the crisis, efforts have been made to encourage the government to lead sectoral coordination. In addition, the African Development Bank (AfDB) and the World Bank are working together to assess the national procurement system and support its strengthening, with the view of using it in aid-funded projects.

" Students come to school every day, especially those who receive the cash transfer. "

Since Madagascar’s return to constitutional order in 2014, the World Bank has developed a set of lending and analytical activities to solidify the country’s emergence from the crisis, restore inclusive growth and improve resilience (human, environmental, and institutional). These are shaped by an active dialogue with the government and seek to address selected governance and institutional constraints for a more equitable, efficient, and accountable management of public resources, particularly at the local level. The program will be fully articulated in a 2017-2020 Country Partnership Framework. It will make full use of the IDA resources available under the IDA Turnaround regime for which Madagascar qualified for three years, starting from early 2016.

Georgette Raharimalala is a mother of three who started benefiting from the cash transfer program in October 2014. Landless, she and her husband work hard every day to make a living and to send their children to school. She says: “Since the cash program, we are able to pay for the children’s school registration fees, their clothes, and food.” Marie Colette Ravaonasolomampionona, the school principal, notes: “Since the project started, we have 104 additional students. We used to have 273 students, now we have 377. Students are now much more motivated. They come to school every day, especially those who receive the cash transfer. In the past, during the lean season, children were malnourished but now they come to school every day.” 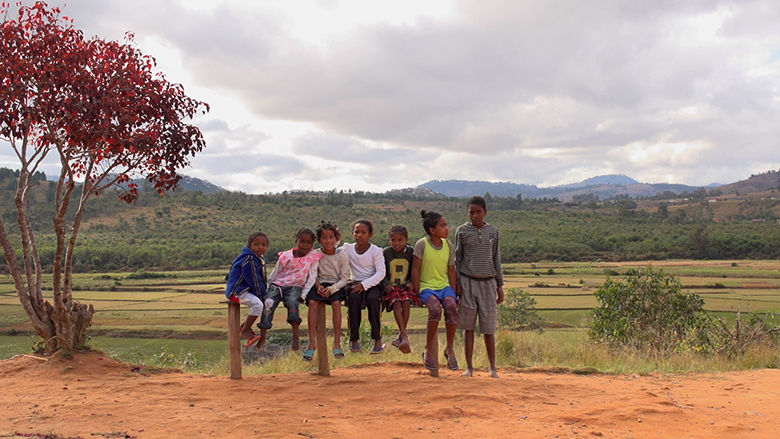 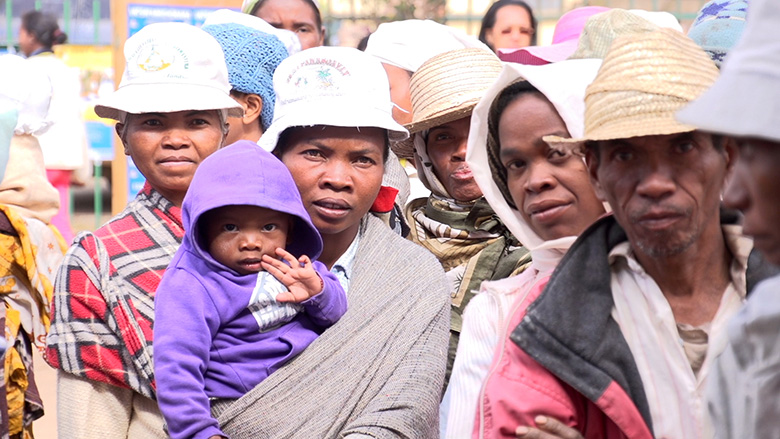