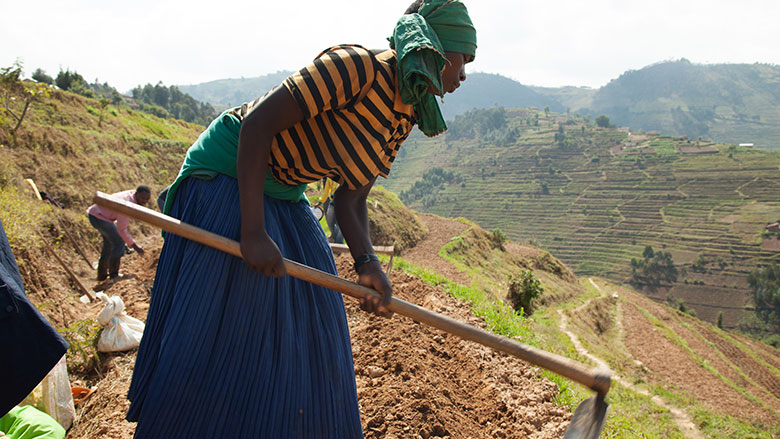 Over the last decade one million people in Rwanda have lifted themselves out of extreme poverty, capitalizing on a rapidly improving agriculture sector in which the International Development Association (IDA) has been proud to make substantial investments. Although agriculture is the backbone of the Rwandan economy accounting for 33% of GDP, occupying 79.5% of the labor force, and generating more than 45% of the country’s export revenues—its development has been constrained by population density, hilly terrain, and soil erosion. Since 2001, Rwanda has worked closely with IDA to make on-the-ground investments to achieve food security and increase agricultural productivity. The results are remarkable. Agricultural production has more than doubled and Rwanda was able to attain food security in 2010, producing enough on its own to not have to rely on imports. Agricultural productivity has increased by more than one-third in ten years, commercialization has expanded allowing rapid export growth, and farmers’ incomes in some cases have risen by 30%. This has helped cut the extreme poverty rate by 14 percentage points. Between 2006 and 2011, poverty was reduced by about 12% owing largely to increased productivity (35%) and commercialization (10%) in the agriculture sector.

Rwanda’s GDP per capita (constant US dollars) increased by 5% per annum in the last decade, but given the 2.7% rate of population increase, this growth rate would need to be accelerated further to achieve sustained poverty reduction and in order to meet Rwanda’s ambitions to achieve lower middle-income status by the end of the decade.

Currently, growth remains driven by the public sector financed by foreign aid (30-40% of the budget is financed by foreign aid).  Diversification of the economy and growth of the private sector is constrained by: (i) low energy access rates (at around 20% in 2014) and the highest cost in the region (still at around $0.22 per kwh in 2014); and (ii) high transportation costs compared to regional averages. Costs from the main ports of Mombasa and Dar es Salaam are estimated to be at least 70% higher than that in the rest of the East African Community (EAC) region and account for about 40% of the cost of imported goods and 50% of exported goods. Despite an adverse external environment, Rwanda has maintained steady growth at 6.9% in the first three quarters of 2015, almost the same as the average over the past five years and the country’s potential growth. Annual average inflation rate at 2.5% in 2015 was less than half of that of other EAC countries.

With IDA funding, the Bank’s analytic work that helped inform the development of Rwanda’s medium term 2008-2013 Economic Development and Poverty Reduction Strategy (EDPRS), concluded clearly that increasing agricultural productivity and commercializing production would be critical to achieving Rwanda’s vision for structural transformation from subsistence agriculture to a middle income economy.

The Bank embarked accordingly on a program of investment lending support first using a three phased Adaptable Program Loan consisting of the Rural Sector Support Project (RSSP) that since 2001 has focused on intensifying production in the marshlands, and by the Land Husbandry, Water Harvesting and Hillside Irrigation (LWH) Project that started in 2010 and focuses on developing horticulture and food crop production on the hillsides.  These long-term programs have enabled the government to make significant progress on its agricultural intensification objectives through investments in infrastructure for irrigation and erosion control, for the provision of quality inputs, and for capacity building of all the stakeholders in various agricultural value chains. These programs have also incorporated a number of innovations such as the farmer based extension model that has led to increased rice productivity and a comprehensive land husbandry package that has enabled effective erosion control and soil fertility restoration at the landscape level.

Starting in 2008, an annual development policy operation (the Poverty Reduction Support Financing) has underpinned critical policy reforms in the agriculture sector including: (i) improving planning and predictability of funding for the agricultural sector to allow for more effective spending on input distribution, irrigation, water, and soil management; (ii) promoting the emergence of a private sector procurement and distribution system for agricultural inputs, especially fertilizer; and (iii) capacity building of private sector agro-dealers.

" The project has taught me better farming methods which increased my yields. I have sold part of the increased yields to buy health insurance for my family and as well pay school fees for my children. "

Since the beginning of the First Rural Sector Support Project (RSSP1) in 2001:

As of May 2016, the IDA lending portfolio in Rwanda consists of 12 active projects with total commitments of $881 million in the key sectors of agriculture, energy, transport, skills development, demobilization and reintegration and social protection sector. Current IDA investments in agriculture RSSP 3 ($95.9 million) and LWH ($69 million), and the bank is managing three trust funds totaling US$ 72 million directly co-financing LWH.

The World Bank was also instrumental in putting into place a Common Framework of Engagement (CFE) which facilitated engagement with potential new financiers for the LWH program. On the private sector front, the World Bank Group (WBG) supported a high-level agriculture investor forum in November 2010 focusing on the horticulture (fruits and vegetables) and tea sub-sectors. The forum attracted over 100 international investors and the task force (joint government and WBG) formed to follow up on potential deals continues to work on the 23 potential deals that were an outcome of the forum.

Annually, IDA disburses about $100 million in sector budget support operation to support strengthening the government's social protection system and improving the quality of service delivery at the decentralized level. The Bank also undertakes a number of analytic pieces and just-in-time policy notes each year.

" The production of Irish potatoes has increased from 10.5 tons in 7 hectares to 42 tons in 13 hectares. Cooperative members attribute this boost in production to RSSPs support. When we look back at the traditional farming methods we used, we consider this as a great success. "

Farmer and president of a potato producers cooperative

The Government of Rwanda has established a number of formal aid coordination mechanisms including sixteen Sector Working Groups (SWGs). Each mechanism is chaired by the government and co-chaired by a development partner. The Bank currently co-chairs the energy, public financial management and urban SWGs.

SWGs provide a forum for dialogue, ownership and accountability of the development agenda by all stakeholders at the sector level. They build synergies in policy formulation, implementation and undertake biannual joint sector reviews. The agriculture SWG is particularly effective with the active and engaged participation from key development partners such as the Canadian International Development Agency (CIDA), the United States Agency for International Development (USAID), the Japanese International Cooperation Agency (JICA) and the World Food Program. The private sector, civil society and farmers’ organizations are also very engaged.

A particular strategy that the Bank has adopted in Rwanda is to leverage IDA funding to crowd in funding from other sources. In agriculture, this has involved leveraging both public and private sector financing. In the public sector, an initial IDA credit of only $34 million to the LWH Program has leveraged financing from the Global Agriculture and Food Security Program (GAFSP) of $50 million; from USAID of $14 million and from CIDA of 8 million Canadian dollars bringing donor contributions to the program to over $106 million. The World Bank was also instrumental in putting into place a Common Framework of Engagement (CFE) for LWH financiers. The CFE facilitates engagement with potential new financiers for the LWH program.

" I used to harvest 10 kilograms of maize on one and half hectares but now I harvest five tons. On my savings account in Sacco, I have 250,000 Rwandan francs and I am planning to buy a maize milling machine. "

The second Economic Development and Poverty Reduction Strategy aims to achieve the following goals by 2018: (i) increasing GDP per capita to $1,000, (ii) reducing the poverty rate to below 30% and (iii) the reducing extreme poverty rate to below 9%. An underlying macroeconomic assumption is to accelerate annual GDP growth to 10% over the period 2013-2018. To attain these objectives, the Rwandan government has implemented several ambitious programs designed to improve and diversify the country’s agriculture sector as a key strategy to fight poverty. In the short-to-medium-term, agriculture remains the best possibility of continuing to reduce poverty; weathering the impact of the global economic crisis; maintaining macro-economic stability; reducing job unemployment; and increasing export earnings. As such, the Bank will continue to support the sector to address some of the key impediments to increased agricultural productivity including: a poor feeder roads network; lack of information on investment potential; prohibitive air freight costs; inadequately developed frameworks for quality certification; and a lack of post-harvest handling and storage facilities.

In March 2014, IDA committed a further $60.9 million to help the Government of Rwanda to upgrade road conditions and intensify farmers’ agricultural productivity as part of the strategy to reduce poverty and boost shared prosperity throughout the country. Rwanda’s government, which has demonstrated strong country ownership and performance, plans to eliminate the 23% of the population currently living in extreme poverty by 2020.

“The project has taught me better farming methods which increased my yields. I have sold part of the increased yields to buy health insurance for my family and as well pay school fees for my children.” - Aphrodis Nsengiyumva, a farmer from Nyanza

“In the past, I cultivated and harvested very little and didn’t have enough left over to sell at the market. But after constructing terraces, I had a good harvest and a surplus for the market. I had an uncompleted house but now, I have been able to buy cement from the sales of my potato harvest and we are about to complete the house.” - Colette Nyiraneza, a farmer

“The production of Irish potatoes has increased from 10.5 tons in 7 hectares to 42 tons in 13 hectares. Cooperative members attribute this boost in production to RSSPs support. When we look back at the traditional farming methods we used, we consider this as a great success.” -Zigama Francois, farmer and president of a potato producers cooperative

“I used to harvest 10 kilograms of maize on one and half hectares but now I harvest five tons. On my savings account in Sacco, I have 250,000 Rwandan francs and I am planning to buy a maize milling machine.” – Minani, a farmer in Rwamagana District