Mucho Corazón: Using a soap opera as a vehicle for financial education in Mexico

Scenes from the Mexican telenovela Mucho Corazón (A Lot of Heart).

The World Bank assisted producers of a soap opera (telenovela) in Mexico with including messages related to basic financial education in the script. A qualitative evaluation showed that (a) viewers like learning through entertainment media and (b) the results were context specific—viewers who identified more closely with the characters in the soap opera were more likely to change their behavior.

As financial inclusion spreads worldwide, the issue of how to provide effective financial capability training is a growing concern for policymakers. Data on the use of financial services in Mexico indicate that many people could benefit from simple advice. The 2012 Mexican Financial Capability Survey  found that significant majorities agree with statements that show a short-term mentality such as “The future will take care of itself.” No surprise, then, that only 7 percent of Mexicans save in a formal account, compared to a regional average of 10 percent. Moreover, only 12 percent of Mexicans in the bottom 40 percent by income distribution have a formal transaction account, compared to 41 percent in Brazil.

One area where Mexico does not lag is access to television—approximately 95 percent of households own at least one set. To integrate financial education with televised entertainment, the World Bank worked with the producers of the Mexican telenovela Mucho Corazón to include financial messages in several story lines across 7 of 35 episodes. World Bank staff advised the show’s producers on the selection of financial topics and reviewed some scripts.

Mucho Corazón is a typical telenovela—but with a financial twist—intended to educate as well as to entertain. It tells the story of Maruch, a young indigenous woman from a rural community in Chiapas. Creating a budget, saving, investing, and avoiding financial abuse are all themes in Mucho Corazón.

Mucho Corazón was broadcast in 2012 in Chiapas and subsequently in approximately 20 other Mexican states through state-owned TV channels and in six other countries, mostly in Central America.

Lessons were drawn from a qualitative evaluation of the financial messages in Mucho Corazón in two Mexican states, Queretaro and Oaxaca. The research included twelve diverse focus groups and 32 individual interviews, in both of which participants saw the same short scenes from the telenovela where financial issues were being addressed. The two most important results that emerged were:

2. The effects of the intervention were context specific. To analyze and compare viewers’ reactions to Mucho Corazón, the interviews asked respondents to evaluate the clips on five dimensions. Figure 1 shows the results regarding the savings theme for both Oaxaca and Queretaro. Both groups understood the educational message about savings and said it was conveyed clearly. In Oaxaca, viewers also indicated a high level of identification with the topics and said they experienced a “change of perception” that could lead to behavior change. Oaxaca is one of Mexico’s southernmost states, borders Chiapas (where Mucho Corazón was produced and filmed), has a large indigenous population, and incomes are below the national average. Residents of Queretaro, by comparison, were less likely to identify with the clips, and few indicated that their attitudes were affected by a “change of perception” that could lead to behavior change because of the show. Queretaro is north of Mexico City, is more urban and has a higher-income population. In other words, Mucho Corazón was more effective where people more closely identified with the characters and setting. 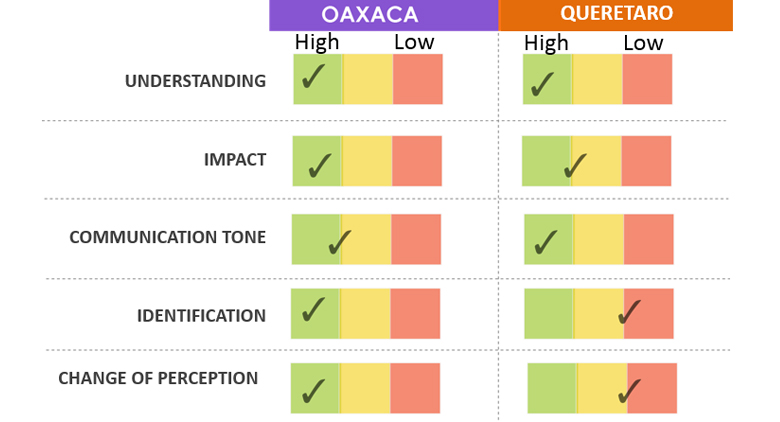 The knowledge that effects are context specific (i.e., that respondents from Queretaro did not identify with the show and did not change their attitudes about the educational themes, but viewers from Oaxaca experienced more change) is informing future broadcast plans for the soap opera, which will likely focus on more rural, indigenous populations.

Future evaluation work with Mucho Corazón may include outreach activities such as text or voice messages, which give viewers a concrete link to government agencies or financial services to make it easier to take action.

A 24-year-old woman from Oaxaca commented, “It is a subject [audiences in] Oaxaca would be interested in, since we do not have a culture of saving money.”

A young man in Queretaro, when asked whether he would prefer to learn about financial topics through a soap opera or more traditional methods such as a classroom presentation, said he favored the soap opera. He said it allows him to see how someone can develop financial skills by watching the characters in the drama, which is easier to understand than just being told what to do.