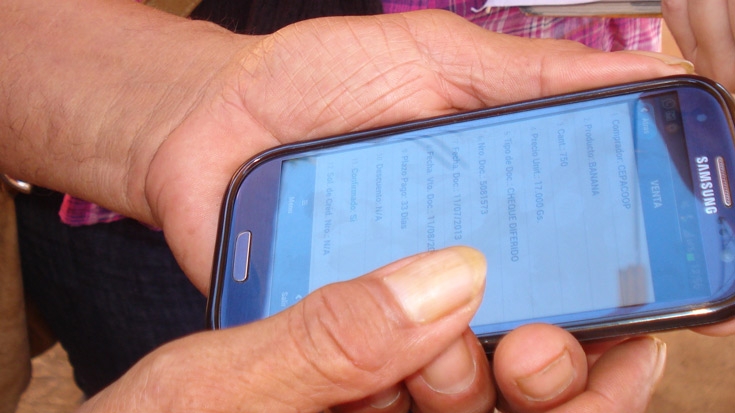 With World Bank assistance, a public financial institution in Paraguay designed and tested a new financial product to provide working capital to small farmers. A proof of concept demonstrated that a factoring solution implemented on mobile phones can effectively ease access to finance for small farmers. Scaling up the solution – starting with an upcoming pilot – may boost small farmers’ productivity.

In Paraguay, agricultural value added is about 20 percent of GDP (10 year average), and agriculture employs about 24 percent of the labor force. Yet, many agricultural producers face challenges in financing their activities. In 2006-2007, only 18 percent obtained credit.[1] Farmers and farming associations report that the top barriers to obtaining working capital are high interest rates (68 percent), information requirements (65 percent), and physical distance (57 percent).[2]

In addition, most sales by rural farmers in Paraguay are informal. In a 2012 market study, 53% of farmers reported that sales were undocumented. Many farmers sell their products at low prices due to weak access to markets and urgent need for cash. Others, incorporated into value chains, usually sell on credit but need liquidity.

Assistance included the design of an electronic platform through which MSAPs could request credit over confirmed credit sales to registered buyers as well as the design of procedures, both of which were tested during the proof of concept. A training material, key element to ensure final users’ understanding of mobile factoring, was also prepared.

The sale and credit processes are registered through the electronic platform. The MSAP may request credit based on confirmed credit sales documented by deferred checks issued by the buyer (concentrators, supermarkets). CAH discounts these checks and, at maturity date, cashes them, cancelling the credit. This system will be further tested by CAH during the pilot phase.

Four successful transactions were processed during the proof of concept. These were result of real sales done by small cooperatives of farmers to the Central Paraguaya de Cooperativas (CEPACOOP). Credits were disbursed and cancelled from June 2013 to January 2014 and channeled through 3 MSAPs that act as the small cooperatives’ person in charge of preparing sales orders received from CEPACOOP. The small cooperatives involved were Cooperativa Guayaivi Unido (95 members) from Guayaibí, District of San Pedro, and Cooperativa Pacova Poty (90 members) from Tembiapora, District of Caaguazú. On average, each credit (approximately 40 days) based on a sale of bananas to CEPACOOP directly benefits 20 people, including agricultural producers and workers that prepare the loads.

During the proof of concept, internal processes at CAH were put in place, tested, and adjusted for the pilot phase that will come next. The Administrative Council approved the final version of the protocols in November 2013.

A final user training manual was delivered to CAH. The manual explains financial concepts and illustrates in detail the process for mobile factoring operations during the pilot. As such, the manual itself (in addition to the proof of concept) is a key input to the upcoming pilot.

Due to legal restrictions on fully-electronic implementation (including the fact that electronic invoices and electronic signatures have not yet been implemented in Paraguay) the pilot  will follow the same mix of paper-based and electronic processes used in the proof of concept.

For the pilot, CAH will negotiate with a local telecommunications company to deliver mobile phones to MSAPs and will provide training.

Once the pilot ends, CAH should work to provide market price information through the platform and upgrade its system to fully integrate the factoring scheme. New developments would also be required once electronic invoices and signatures are implemented.

Concepción Iberbuden is a small agricultural producer in charge of sales of bananas from Cooperativa Pacova Poty to CEPACOOP. He considers CAH’s new product of great importance because it gives him security about getting the cash needed to distribute payment on time. “Disbursements from Argentina are every 30 to 40 days, sometimes we have problems with [the other] producers because they need to pay their bills, clean or sanitize their banana plantations; with this product we receive payment within the week [of sale]” and this is very helpful for the small cooperative, the producers, and the buyer.