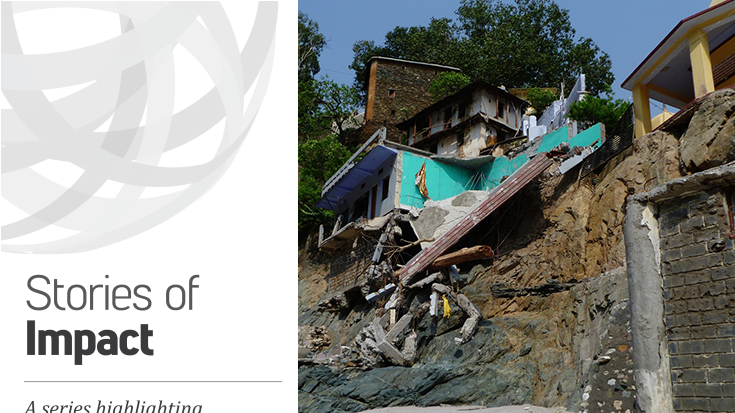 The state of Uttarakhand, India, is all too familiar with the adverse impacts of high rainfall and flooding. However, the monsoons of 2013 brought together a devastating combination of environmental and social factors that resulted in the country’s worst disaster since the 2004 tsunami. A multi-day downpour brought early and torrential rainfall to much of the mountainous region, triggering the collapse of a glacial lake dam and causing heavy flooding and landslides that claimed upwards of 4,000 lives and affected nearly a million people.

In partnership with the Government of Uttarakhand and the Asian Development Bank, the World Bank, and the Global Facility for Disaster Reduction and Recovery (GFDRR) conducted a Joint Rapid Damage Needs Assessment (JRDNA) for the region soon after the disaster, completing a thorough analysis of damage to a variety of social and economic sectors in just over a week. The assessment provided the necessary foundation for targeted, effective recovery and reconstruction efforts to begin.

The Uttarakhand disaster was aggravated by an ongoing Hindu pilgrimage and especially busy tourist season. Thousands were stranded when heavy flooding washed away bridges, roadways, and other infrastructure, requiring the mobilization of the Indian Army, Air Force, and paramilitary troops to help evacuate more than 110,000 people from affected areas.

The flash flooding also set off a series of catastrophic landslides that decimated mountain-dwelling communities. In response, the Government of Uttarakhand requested support from both the World Bank and the Asian Development Bank, bringing together teams of experts to work alongside government officials in assessing recovery and construction needs in the region, especially in regards to infrastructure, housing, services, and livelihoods.

The need to quickly start reconstruction and rehabilitation, coupled with incessant rainfall and limited acessibility to remote areas, brought challenges and urgency to the JRDNA project. The effort:

Sector-specific analysis can lead to targeted recovery and risk reduction efforts. The findings from the assessment clearly showed the scale and socioeconomic impact of the flood damage, which surpassed any historical precedent in the region and was the second largest national disaster in decades. The report also uncovered the extent of sector-specific damage of the flooding, which included an estimated $1 billion loss in tourism revenue for the year and, by the end of the recovery period, more than $3.8 billion in total economic losses. Road connectivity was revealed to be an essential component for a more resilient tourism sector, informing a World Bank project to improve infrastructure, enhance weather impact forecasting, and better mitigate risks from severe storms and landslides.

Previous recovery efforts can inform reconstruction strategies. The assessment also recommended the creation of comprehensive recovery and reconstruction framework that would provide a sequenced, prioritized, and programmatic action plan to guide resilient rebuilding and investment. The suggested strategy drew upon various lessons learned from prior recovery efforts in regions such as Bangladesh, Mexico, and Haiti, which included the importance of both immediate action and appropriate realism in long-term time resilience goals.

The assessment provided the Government of Uttarakhand with preliminary steps towards a comprehensive recovery and reconstruction framework. Area specific studies were recommended to generate detailed and prioritized needs for reconstruction efforts, along with financial and implementation strategies. These recommendations informed a $250 million project funded by the World Bank that aims to ensure sustainable social and economic restoration in the region.

" The need to immediately start the recovery and reconstruction work, especially in the most affected areas, prompted the need for a rapid assessment to understand the nature of damages post-disaster. "