There are approximately 6–12 million Roma in Europe, equivalent to the population of a country the size of Bulgaria or Portugal. Two-thirds of Roma live in Central and Eastern Europe. They have been settled, predominantly rural populations for several centuries, and the majority of them live in poverty. The Roma population is also largely young, growing, and excluded from the labor market in countries that are otherwise aging rapidly. Already as many as one out of five labor market entrants in Bulgaria and Romania are Roma, and the figure is one out of six in Hungary and Slovakia. The growing importance of Roma in the labor force makes Roma inclusion smart economics; achieving this inclusion requires evidence-based policies and integrated interventions that are based on reliable data and information.

The World Bank focuses on three key areas to promote Roma inclusion in the context of its work on poverty and shared prosperity in Central and Eastern Europe by:

Support for Roma inclusion has generated the following results:

- The “Regional Roma Survey” (2011), jointly designed by the Bank and the United Nations Development Programme (UNDP) and implemented by UNDP in the Czech Republic, Slovakia, Hungary, Romania, and Bulgaria, interviewed roughly 750 Roma and 350 nearby non-Roma households in each country. Based on the survey, the Bank developed a robust database on Eastern European Roma living conditions that is available for diagnostic work and future results monitoring and has been used in national Roma integration strategies and EC Country Specific Recommendations.

- Building on the Roma survey, the Bank produced in-depth reports on early childhood education and care: “Toward an Equal Start: Closing the Early Learning Gap for Roma Children in Eastern Europe” (2012), and financial inclusion: “Reducing Vulnerability and Promoting the Self-Employment of Roma in Eastern Europe through Financial Inclusion” (2012), accompanied by a case study of the Hungarian social microfinance facility “Kiutprogram” (2013).

- Technical assistance to the National Council for Coordination on Ethnic and Integration Issues (NCCEII) in Bulgaria reviews and strengthens local government action plans for Roma inclusion.

" We are very satisfied. Our old water supply network was replaced. It was very bad. Pipes used to break every winter. They now put in new pipes, going to every home. The sewage was also bad. We used to get contaminated water when it rained. Now it functions very well, there is no more waste water going around. "

- Founding the Roma Education Fund (REF), an international nongovernmental organization (NGO) established by  the World Bank , the OSF, the Council of Europe Bank and 8 bilateral donors to support education policies and programs in 16 countries to close the Roma education gap. The Bank provides technical assistance to support capacity building in the REF as part of its Roma inclusion agenda, strengthening the foundation’s results focus through improved program monitoring and rigorous impact evaluation.

- Consultations with the EC on Roma inclusion to discuss and share results from Roma analytical work and to disseminate policy lessons at EC-convened meetings with Roma inclusion stakeholders. Bank findings have informed key EC and European Parliament policy documents. The EC has also financed World Bank technical assistance, including the regional Roma survey, the studies on ECD and financial inclusion, and recently small area poverty maps of Eastern Europe and a review of Roma living conditions.

" We used to walk on mud. Children were all covered in mud when they used to come back from school. Now there is light, there are sidewalks, and there is a pedestrian crossing where children can cross the road. "

- The Bulgaria - Social Inclusion Project (2008–13, $43 million, IBRD) supports municipal microprojects for provision of integrated social and childcare services and construction of ECD  infrastructure where such is lacking or inadequate.

- The Macedonia – Conditional Cash Transfer Project (2007–14, $25 million, IBRD) provides financial support to beneficiaries, including Roma, conditioned upon enrollment of their children in secondary school and a class attendance rate of 85 percent.

In FY14, IBRD’s contribution to the Bank’s regional Roma work was $250,000, supplemented by a total of $150,000 from Trust Fund resources (Innovation Grant and Umbrella Facility for Gender Equality). This amount was geared toward generating new knowledge on Roma inclusion in Central and Eastern European countries. Further investments by the World Bank include about $688,000 in impact evaluations and $300,000 in preparation of the Bulgaria gender study. Furthermore, the World Bank has mainstreamed Roma inclusion in several of its operations in Central and Eastern Europe as well as the Western Balkans (see list above), which directly contributes to the welfare of Roma communities.

In all of its work, the World Bank emphasizes partnerships with international and local organizations, bringing diverse interests and stakeholders together. Partnerships have been established with the EC, UNDP, United Nations Children’s Fund (UNICEF), national governments, and civil society organizations like Open Society Foundations and the Roma Education Fund. Many areas of engagement are also at the heart of Europe’s 2020 strategy for Smart and Inclusive Growth.

Moving forward, the World Bank’s work on Roma inclusion will continue to promote equality of opportunity through improved access to inclusive education, productive employment, and improved living conditions for the Roma population in Eastern Europe. This activity will consist of rigorous diagnostics and analytics, policy dialogue, implementation advice, and institutional capacity building, including to the Roma Education Fund. The World Bank will continue to leverage partnerships with governments, international stakeholders, and civil society organizations for impact.

The Community Infrastructure Project provided a Roma neighborhood in the town of Gracanica in central Kosovo with a $70,000 grant to make investments that allow inhabitants to have a safer, more comfortable life.

“We are very satisfied. Our old water supply network was replaced. It was very bad. Pipes used to break every winter. They now put in new pipes, going to every home. The sewage was also bad. We used to get contaminated water when it rained. Now it functions very well, there is no more waste water going around.”  Ismet Selimovic, Gracanica, Kosovo

“We used to walk on mud. Children were all covered in mud when they used to come back from school. Now there is light, there are sidewalks, and there is a pedestrian crossing where children can cross the road.” Sanela Berisha, mother of five children, Gracanica, Kosovo

$250,000
contribution by the International Bank for Reconstruction and Development (IBRD) to the World Bank’s regional Roma work for Fiscal Year 2014. 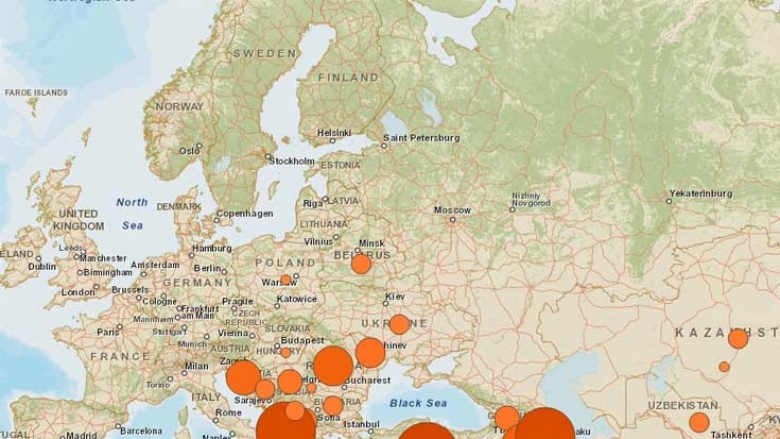