April 8, 2014
Uruguay improved its preschool and primary education by expanding its Full-Time School (FTS) Model. This model improved the quality of learning and mitigated the negative connotations of poverty. It extended the school day from 4 to 7.5 hours; improved educational infrastructure; provided meals and nutritional snacks; and introduced a broader curriculum and a new teacher development program. Project beneficiaries included students, parents, and school staff.

In 1995, the Uruguayan Government undertook an education reform aimed at improving the equity and quality of education, and increasing access among the poor. The reform recognized the need to improve the quality of education by introducing new pedagogical methods, extending the school day, and improving conditions for the disadvantaged to enter the work force.

Despite improvements, the gap in learning achievements between wealthy and disadvantaged students remained wide. Repetition rates were concentrated in first and second grades and closely correlated to the students’ socioeconomic level. Uruguay’s drop-out rates compared unfavorably with Chile and Argentina. The pace of human capital accumulation, measured by the average number of years of schooling, had slowed, compared to other countries with similar levels of development in the region and Asia.

The Project also supported the focus on socio-economically disadvantaged students through, among other initiatives, the creation of interdisciplinary teams to strengthen school-family partnerships. These were later institutionalized within the Pre-school and Primary Education Council. The Government channeled substantial additional resources to students from the lowest quintiles.

During the third phase of the Project (2002-2012), improvements were seen in a range of education equity, quality, and efficiency indicators relating to students from disadvantaged and very disadvantaged socio-economic backgrounds, parents, and school staff. These include:

The third phase of the Basic Education Quality Improvement Project was supported by an IBRD loan of US$42 million and an Additional Financing of US$29.9 million, and had a total cost of US$93.4 million, including counterpart funds. This followed two earlier IBRD loans of US$31.5 million and US$28.3 million in support of the program’s first two phases. The World Bank also provided substantial technical assistance and was closely engaged on the ground. Most of the Bank team consisted of region-based staff and consultants with vast experience and strong skills, who collaborated closely with the Government team.

The Project Coordination Unit actively promoted the close participation of key institutional stakeholders, including the National Administration for Public Education’s Central Steering Council (CODICEN) and the Pre-school and Primary Education Council (CEIP). The Project also benefited from meaningful consultations with principals, teachers, students, and parents. Project architects developed highly personalized designs for the school buildings by actively seeking input and feedback from the school and the broader communities.

A follow-on operation, Support to Uruguayan Public Schools Project, approved in September 2012, continues to provide support to the Government of Uruguay in the ongoing expansion of the FTS model as a means to enhance equity, quality, and efficiency of pre-school and basic education, particularly among more vulnerable population groups. In addition, this operation provides technical assistance for the institutionalization of teacher in-service training within CEIP.

Mercedes Chocho is the School Principal of the FTS School #50, in Vergara City at the Treinta y Tres Department: “This school has been built with participation from pupils, teachers, the development commission and parents. We all have collaborated and wish that this small piece of country that is a Full-Time School will help the school community, especially the students, who are grateful for everything this kind of schools offers them”. 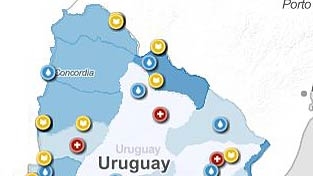