WASHINGTON, November 8, 2016 – Less than a year after the World Bank unveiled and began supporting implementation of its ambitious Africa Climate Business Plan (ACBP) during COP21 in Paris, African countries are beginning to show progress.

A new progress report on ACBP implementation, Accelerating Climate-Resilient and Low-Carbon Development, highlights the success African countries have had since the launch of the ACBP. As of November 7, 2016, 19 countries in Sub-Saharan Africa have ratified the Paris Agreement for carbon offsetting and 45 countries have committed to implement their Intended Nationally Determined Contributions (INDCs). The ACBP had identified various sources of potential financing for the implementation of activities aligned with the INDCs.

The report comes as country leaders, development organization representatives and climate change specialists gather in Marrakech this week for the start of the COP22 climate conference.

“It was fortunate that we launched the ACBP at COP21, where Africa was front and center. Morocco is now taking the baton from France to ensure continuity and renewed attention to the African continent at COP22. This is the time to scale up efforts to accelerate Africa’s climate-resilient, low-carbon development,” said Makhtar Diop, World Bank Vice President for Africa.

The Bank is doing its part to help securing financing for the plan, which outlines actions required to increase climate resilience and low carbon development. Implementation estimates that near-to-medium term implementation will cost about $19.3 billion to be raised by 2020.

“We have mobilized $3.6 billion from IDA to implement the Business Plan, including projects already approved by our Board since Paris, and projects to be approved by the end of 2016,”  said Jamal Saghir, Senior Regional Adviser for the World Bank Africa Region.

“The Business Plan is an ambitious and comprehensive plan,” he added. “Although the Plan’s full-scale rollout and implementation will take a few years to be completed, some achievements are already visible in resource mobilization and action on the ground.”

The Bank has been working with client countries, development partners, and the private sector to prepare programs and mobilize resources. Through a partnership with the African Group of Negotiators has helped countries sharpen Africa’s negotiating positions and spur climate action. The partnership resulted in strengthened capacity of the group to advocate in favor of climate action in Africa, and also in stronger country ownership of the ACBP.

Bank experts, African leaders and development partners recently met to discuss the success of the plan’s advancement during the IMF/World Bank Annual Meetings in October. Ministers from Côte d'Ivoire and Nigeria shared progress from their countries and showcased specific and ongoing and planned initiatives.

Daniel Kablan Duncan, Prime Minister and Minister of Economy and Finance for Cote d’Ivoire, reiterated his country’s commitment to reduce greenhouse gas emissions to 28% by 2030, increase the country’s share of renewable energy and minimize deforestation and forest degradation through the implementation of a “zero deforestation agriculture.” He appealed to bilateral and multilateral partners to support Cote d’Ivoire in her efforts to implement the Paris Agreement. “I hope to see this historic Agreement come into force as early as possible in order to preserve our invaluable common good; the earth,” Duncan said.

Hon. Amina J. Mohammed, Nigeria’s Minister of Environment, spoke of Nigeria’s plans on how to turn their Intended Nationally Determined Contributions (INDC) from words to actions. “I think the fact that we are underscoring Africa and that individual countries are in the driving seat is really important,” she said. She further emphasized the importance of long-term partnerships and investments to address the challenges of climate change.

The ACBP progress report notes that with support from the Bank and development partners, African governments have made progress in many key areas of the plan, including the ocean economy, coastal protection, forests, landscapes, agriculture, migration, transport, water, and energy.

On the Ocean Economy, the Bank teamed up with the Government of Mauritius and organized an African Ministerial Conference on Ocean Economies and Climate Change, where 20 countries attended and endorsed the Mauritius Communiqué. This led to a financial and technical package with the African Development Bank and Food and Agriculture Organization, which will be submitted during  COP22.

Agriculture is a major economic driver in Africa. Climate-smart agriculture (CSA) practices, such as agroforestry or livestock and pasture management, can reduce greenhouse gas emissions intensity of agricultural production, as well as remove carbon from the atmosphere and store it in trees and soils. The Bank Board approved 11 projects, totaling $1.4 billion in IDA commitments, reaching more than 1.6 million farmers.

The Bank also remains committed to installing 1 GW of solar capacity by 2020. Bank teams are preparing a $200 million regional project to expand electricity access to households and communities through modern off-grid electricity services in nine target countries. Another $71 million is supporting an additional 280 MW in the Olkaria plants in Kenya for geothermal energy.

As part of their INDCs, countries such as DRC, Ethiopia, Burundi and others are receiving Bank support to achieve the goals of the African Forest Landscape Restoration Initiative, which will bring 100 million hectares of degraded and deforested land under restoration by 2030. 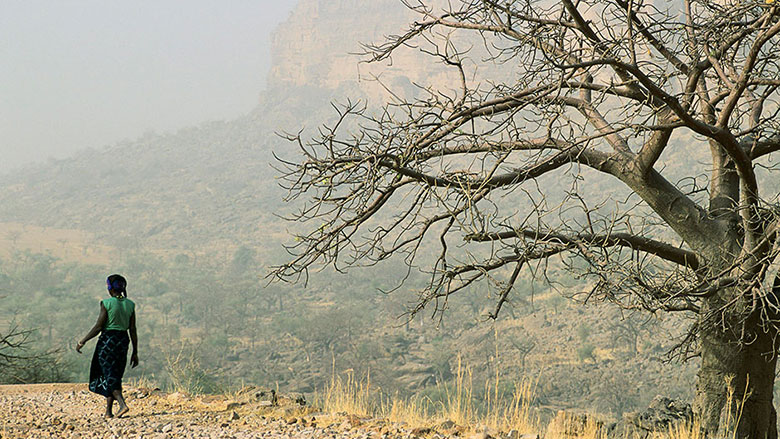