What Gets People to Wash Their Hands 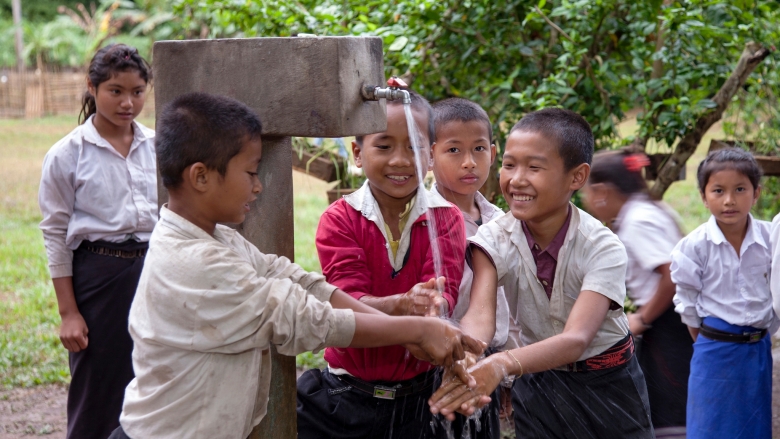 Handwashing with soap and water is a simple way to reduce the spread of disease. Yet many people don’t wash their hands when they should: before touching food, after using the toilet or after cleaning a baby’s bottom. Because bacteria, parasites, and viruses can easily spread when people don’t wash their hands, finding ways to boost handwashing can significantly reduce the risk of potentially fatal diarrheal and respiratory infections for children.

The World Bank’s Water and Sanitation Program, a multidonor partnership administered by the World Bank, launched the Global Scaling Up Handwashing Project in 2006. The project has been implemented in four countries—Vietnam, Peru, Tanzania, and Senegal. In order to assess the results, the Bill & Melinda Gates Foundation provided not only funding for the projects but also for a set of impact evaluations. So far, results are in for Peru and Vietnam.

World Bank researcher Claire Chase, who is involved in the studies, talks about the work and the challenges.

Q: When it comes to getting people to wash their hands, what’s the main lesson we’ve learned?

We know that appealing to the health benefits of hand washing is not effective, except in unique situations like outbreaks of cholera or severe influenza. Evidence shows that people respond more strongly to emotional appeals – those that reflect a desire to nurture one’s children, the prestige of cleanliness, or simply disgust that dirty things might be on the hands.

Q: What’s the challenge now in terms of spreading the message?

We need to know what works at scale. Until now, programs have mainly been small scale, which makes it easier to ensure frequent follow up and reminders to wash hands. Many have succeeded in changing behaviors, but we don’t know whether that’s because of the frequent follow-up or the behavior-change methods used. We also don’t know whether the changes are maintained long after the intervention is over, which is critical. The evaluations in Peru and Vietnam were the first of programs that targeted millions of women and children. But still, as the evaluations showed, we need more information on which approaches work and are cost-effective at scale.

Q: To reduce the spread of diarrheal diseases, is it possible that we need to look more broadly at handwashing in tandem with other measures?

Pathogens from human feces are responsible for a large portion of diarrheal disease and they infect people through multiple pathways. They can enter a person’s body through contaminated water, through flies that rest on food, or through dirty shoes or soles of the feet that have come into contact with contaminated soil, bringing harmful pathogens into the home. Washing hands cuts off only one of these pathways. It is largely recognized that hand washing should not be a standalone intervention, but given that it is a stubborn behavior to change, more focus is needed on the best ways to influence it, in combination with other water, sanitation and hygiene programs.

Q: Even when awareness is raised, there isn’t any observable improvement in how often or when people wash their hands.

Most people surveyed for the study knew the importance of handwashing and had some knowledge of when and why they should be washing hands with soap. The evidence shows that handwashing, like flossing, needs to become habit, rather than something one must think about each time before doing it. If not, other priorities get in the way. Appealing to social norms could also be an effective way to get people to wash their hands.

Q: Do hand washing behaviors change depending on culture? Are people in developed countries more likely to wash their hands with soap and water?

Not necessarily! A recent study in the UK found that only 32% of men and 64% of women washed their hands after using the toilet, even though 99% claimed they did. People in developed countries are just less exposed to the particular harmful pathogens in fecal matter that cause diarrhea, even though they are still exposed to large amounts of fecal bacteria on a daily basis, as the UK study showed. (Read the BBC article on the study)