India accounts for 33 percent of the global population without access to safe water and adequate sanitation. Good sanitation is indispensable for reducing many diseases and improving overall public health. There are also important economic consequences for not having it – the World Bank’s Water and Sanitation Program estimates that developing countries lose between one and seven percent of GDP annually due to poor sanitation. But encouraging take up of new sanitation methods and attention to hygiene isn’t always easy. It could be that households don’t understand the need, or they don’t have the money to make the investment. Experts are still working to understand what the barriers are to take up for improved sanitation, and they’re testing what mix of informational campaigns, credits and sanitation infrastructure might work to improve demand and usage. This evaluation will improve our understanding of the possible obstacles by looking at the effect of offering households microfinance loans for sanitation improvement, and the effect of combining this with an awareness campaign.

The Indian Government has worked to improve sanitation through its Nirmal Bharat Abhiyan policy (formerly known as the Total Sanitation Campaign), but safe sanitation uptake and usage remains low. The 2011 Indian census reported that almost 50 percent of Indian households do not have access to a private or public latrine, meaning that over half a billion people still defecate in the open. In the area where the evaluation was carried out, the 2012 baseline survey conducted by the Indian Ministry of Drinking Water and Sanitation found that 27.4% of households reported having a toilet, although this didn’t necessarily indicate it was used. 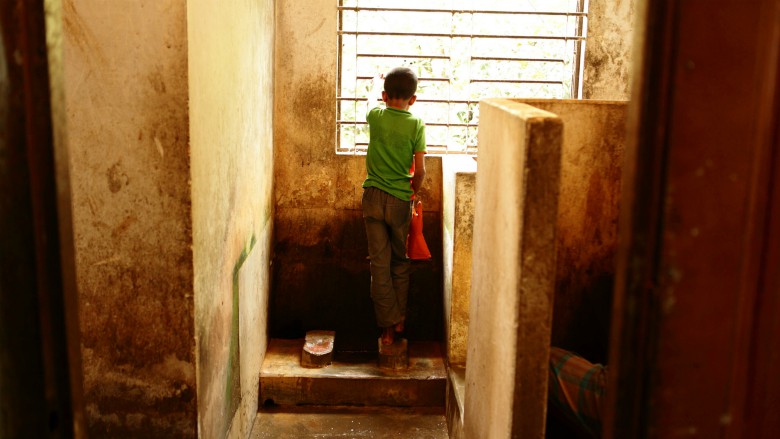 The two-year intervention sought to understand the impact of two possible obstacles in encouraging take up of improved sanitation – a lack of money to pay for improvements, and a lack of knowledge of the associated risks around open defecation. The intervention consisted of two parts. The first was a micro-loan of up to Rs. 15,000 (about U.S. $224) that was made available by microfinance institution to existing customers of its microfinance programs for construction of a new toilet or repair of an existing one. The loan, which had to be repaid in weekly installments over two years, was accompanied by special awareness workshops that the microfinance institution ran for its clients. The second part of the intervention was an awareness campaign that included theatre plays, community information sessions, and interaction with local officials around issues related to sanitation and hygiene.  The awareness campaign was delivered by a non-governmental organization that was created by the microfinance institution years earlier to educate clients of sanitation micro-credit loans about sanitation and good hygiene.

The evaluation applied a cluster randomized control trial. A random sample of 120 Gram Panchayat (typically one or two villages) were assigned to either a control group or to one of two treatment groups: Both treatment groups had access to sanitation microloans, which can help those who can’t afford to pay for improved sanitation, while one treatment group also was exposed to campaigns to improve people’s awareness of sanitation issues and boost their knowledge of what they could do to build or improve their own sanitation facilities.

Results, which will be made public later in 2018, will provide sanitation practitioners and policymakers with information on the effectiveness different approaches to reduce open defecation and promote the construction of improved facilities.