Challenge: Whether it’s in a remote village or a fast-growing urban center, providing clean water and sanitation makes it possible for children and families to live healthier and more productive lives. Getting the necessary infrastructure up and running can be a challenge. Water and sewage systems are costly investments and people may not want to pay to be connected. Reducing upfront costs through subsidies and lines of credit have been successful in increasing household-level access, but this can add to the debt burden of utilities and households if customers fail to pay their bills. Without a reliable revenue stream, it’s hard for governments to maintain systems and sustain services. 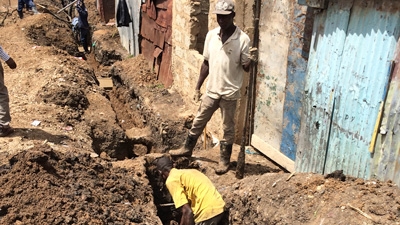 Intervention: As part of World Bank infrastructure project to extend services to poor households in Kenya’s fast growing urban slums, the Nairobi City Water and Sewerage Company provided water and sewer services to more than 8300 customers. These are generally landlords who rent out rooms in compounds in informal settlements in Nairobi. The housing compounds, which usually have six to 10 rooms rented out to migrant workers and families, each received an upgrade of their existing facilities to a ceramic-slab latrine connected to the sewer system, a water tank for storage, and a handwashing station. In total, some 200,000 people, mainly those renting rooms, benefitted. The cost for the upgrade was about $270 per compound, and the landlords are being assessed $4.50 a month over the next five years to pay it back. The water and sewage company is concerned that the landlords, most of whom already have outstanding bills for water services, won’t pay, making it impossible for the water authority to repay the money it borrowed to connect the compounds. More than half of these customers are yet to make a payment for their services and nearly 60 percent have balances for sanitation upgrades and sewer connections that are higher than their original loans. Currently, the main form of outreach is done through community development assistants who work for the water and sewage authority and who go door-to-door to discuss repayment issues with customers. This study will test different approaches to enforcing payment by threats of disconnecting services and encouraging customers to pay by making billing information available to the compounds’ tenants.

Evaluation design: Randomized control trial. The study tests the effect of increased enforcement through disconnection warnings to landlords and bottom-up accountability through the provision of billing information to tenants. Landlords will be randomized into three groups: in the first group, landlords with outstanding bills will receive disconnection warnings; in the second group, a landlord’s current account balance will be provided to the tenants; and in the third group, tenants and landlords will receive both information about the outstanding debt and also a copy of the disconnection warning. In the study’s second stage, the spillover effects of disconnecting compounds on other people’s repayment behavior will be tested. Repayment behavior will be tracked through the utility billing database, which keeps real-time usage and payment records of each customer. This work will start in Kayole Soweto, covering approximately 3000 compounds. It’s expected this will be expanded to the full set of 8300 customer accounts across 12 informal settlements.

Eligibility: Landlords in informal settlements who have customer accounts with the Nairobi City Water and Sewerage Company.

Time frame: The intervention will be carried out between September and November of 2018 and analysis of billing data will run through to April 2019.

Policy impact:  The Nairobi City Water and Sewerage Company   plans to use the results to decide how it can best encourage customers to pay their bills. By helping understand how to expand services to urban poor households in a financially sustainable way, the results may also help inform efforts by utilities in other parts of the country and region to ensure that loans for new sanitation services and monthly usage charges are paid.

Already The results of the baseline survey helped the Nairobi City Water and Sewerage Company set a more reasonable repayment schedule than originally envisioned. Initially, the water authority planned to charge landlords approximately $15 a month, but after the baseline survey showed the landlords’ income, debts and willingness to pay, the amount was lowered to $5 a month.