Performance-Based Incentives for Teachers in Guinea

As in many developing countries, educating the poorest students in Guinea remains a challenge. Often, providing additional funding to schools is not enough to improve learning. The Government of Guinea wanted to improve student learning by enhancing teacher performance in primary schools through an incentive pilot scheme that included a financial reward, social recognition, and teacher training. Researchers evaluated the impact of these incentives on student achievement.

Teachers are vital to student learning, but the evidence is mixed on how to best motivate teachers in the classroom. This evaluation offers one of the first looks at the impact of giving successful teachers public recognition versus actual material rewards, while testing the usefulness of training for teachers.

Guinea is one of the world’s poorest countries and it is struggling with low primary school enrollment and poor learning, even as the number of teachers has skyrocketed by 40 percent over the past few years. The government is looking for new ways to improve learning by making teachers more effective at what they do. This evaluation, implemented together with the Ministry of Pre-University and Civic Education, provided policymakers with information on programs that might be effective for raising student achievement. 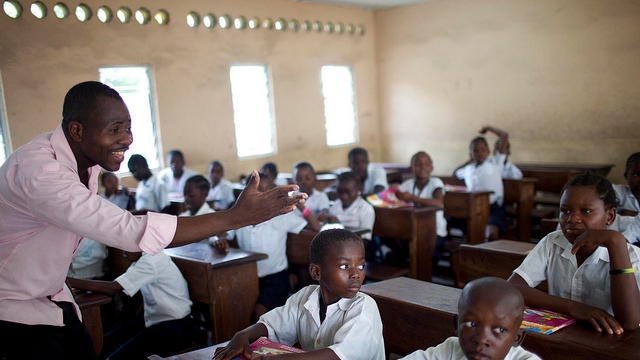 This pilot program covered about 1,550 third and fourth grade teachers and their 40,000 students in 420 non-Arabic schools. The program, which included performance incentives and teacher training, was implemented over two academic years, 2012-2013 and 2013-2014.

Performance-based intervention. Teachers could qualify either for material rewards, such as bags of rice and cell phones, or public recognition, through certificates and ceremonies, if they and their students met certain standards. The standards were based on quality of lesson delivery and students’ standardized test scores. The level of rewards, going from the lowest to highest, were as follows:

Training intervention. Teachers, selected on the basis of their scores on a pre-test, received in-service training to improve content knowledge and pedagogical skills. The training was delivered in face-to-face sessions of 25 days (in total) during school holidays. Inspectors observed teachers using the new strategies and provided feedback on what needs to be improved.

In 2012, schools were randomly assigned to either qualify for performance-based rewards or public recognition or to be the control group and not receive anything and 6,775 teachers participated in in-service training sessions. Researchers measured the impact of different types of rewards and compared the effect of rewards alone versus in conjunction with training. Researchers measured student performance through standardized math and French tests before and after the interventions, and used unannounced visits to collect data on attendance and behavior, in addition to teacher surveys and questionnaires for students and principals.

Similar to many Sub-Saharan African countries, the Government of Guinea is looking for cost-efficient ways to improve learning in the face of poor student academic performance and attendance. Because parts of the evaluation, such as data collection, were carried out by the ministry, government officials honed skills they can use for future evaluations.