Globally, tuberculosis affects some 8.7 million people. Women and children in the developing world are particularly vulnerable. The disease has high mortality rates, but even for survivors, the consequences can be debilitating, with long-term health consequences. Highly effective treatments are free and available to patients in developing countries, but many of those infected with TB are neither diagnosed nor in treatment. The under-detection of TB represents a key challenge for health officials in developing countries because identifying those who have the disease is crucial to the success of any treatment program.

According to the WHO, India has the highest burden of tuberculosis (TB) in the world; of the 10 million people who developed active TB in 2016, about 3 million were Indian. Close to 40 percent of those infected either haven’t been diagnosed or aren’t receiving treatment. In addition to the health effects, the impact on the Indian economy is significant: annual lost wages because of the disease are estimated to be some US $330 million dollars. Infected people are disproportionately from vulnerable and marginalized populations and outreach is costly in terms of time and resources. Also, those who suffer from the disease often don’t know about the availability and effectiveness of treatment.

The India-based non-governmental organization Operation ASHA, which operates 200 tuberculosis treatment centers and is part of India’s National TB Control Programme, explored different outreach approaches to improve identification and treatment of new patients. The program offered cash payments to current patients who referred people who might
have tuberculosis to government testing centers. The program was structured to test the different approaches for finding new TB positive people, including extra payments if the person referred tested positive for the disease. It was implemented between 2016 and 2017.

The evaluation was set up as a randomized controlled trial with 9 experimental groups and a control group. In the control group, patients in clinics received no additional intervention to encourage referrals. In one treatment group, they were given referral cards and encouraged to give these out to people who they though should be tested for TB. In another treatment group, patients got the referral cards and also Rs. 150 (about US $3.00) for every new patient that came for TB screening with one of the cards. In a third treatment group, patients were given Rs. 100 (US $2.00) for every person that came to the clinic for screening, and also received a Rs. 150 bonus if the new referral tested positive. The study was also designed to test different outreach approaches. In one group, patients approached their peers directly; in another they were encouraged to provide the names of people they thought should be approached by a health worker for TB screening, and the patients’ names were not revealed; in the third group, patients provided names and health workers told people who had referred them.

TB patients currently seeking treatment with Operation ASHA and those who have completed treatment within 3 months of the start of baseline data collection.

First, financial incentives were effective in increasing the number of new suspects who get screened or tested. Second, outreach conducted through peers was more effective than the current standard of outreach by trained health workers in encouraging referrals to visit screening centers. Third, making the financial reward conditional on the suspect showing symptoms of TB did not discourage referrals, which means that conditionality can be used to prevent gaming of the incentive system.

The State Tuberculosis Department in Delhi has expressed a keen interest in piloting the referral program in the health clinics directly under their purview. Details are provided below. 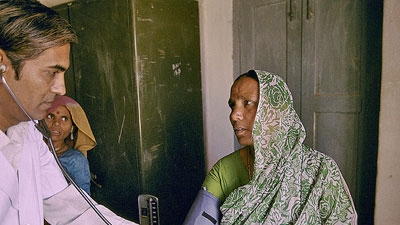 The research team is working with local government officials in Delhi. Specifically, the team is conducting a pilot study with the Delhi State TB Office to test a subset of the experimental conditions tested earlier. The pilot study has also been approved by the Delhi State TB Program’s Operational Research Committee, mandated to vet and approve all TB-related research studies conducted in the state. The goal of the study is to understand the effects of incentives in encouraging patients to make referrals directly in the public health setup. Moreover, given that active community-based outreach is currently outside the routine operations of the overburdened public health sector, a well-designed training module itself can prove to be useful in motivating government TB treatment providers to conduct outreach. A system of peer referrals could complement current outreach strategies without adding to the heavy burden on health workers and offers a cost-effective strategy for outreach.

The results are helping India’s state-run Revised National Tuberculosis Control Program develop strategies for how best to combat the disease. The research team meets regularly with the state program to discuss collaboration. The state program has also used the team’s baseline data—including types of clinics available, lag time between diagnosis and treatment and other things related to getting care—to better understand demographic trends among the country’s tuberculosis patients and challenges in managing their disease. The state-run TB control program also has been interested in understanding the characteristics of the new referrals coming into the system through the referral program and the outof-pocket expenses incurred by TB patients.

The team is in touch with World Health Organization officials, as well as World Bank project teams in the region, to discuss ways of bringing the model to other developing countries with TB populations. This is a model that can be replicated not only in India, but in other countries with similar challenges that are looking to build low-cost, but effective programs.