In developing countries, private schools that keep their fees low to target poor families often offer better education than public schools. But in Pakistan, several external conditions are constraining the growth of these private schools and effectiveness, including access to credit and technical resources. Researchers will seek to overcome these constraints by implementing a project that offers three models of financial support to schools: grants, loans, and equity financing.

While private schools can be a boon in low-income countries for students looking for low-cost, quality education – and help relieve pressure on governments that are too constrained to expand educational opportunities – these schools often have trouble getting loans or attracting investment to expand and improve services. The issue is especially relevant in Pakistan, where about a third of students attend private schools that set their fees low enough to attract poor families.

Since 1980, the number of private schools in Pakistan has grown from about 3,000 to about 45,000. A 2001 survey showed that about one in five of Pakistan’s poorest families sends their children to private village schools. 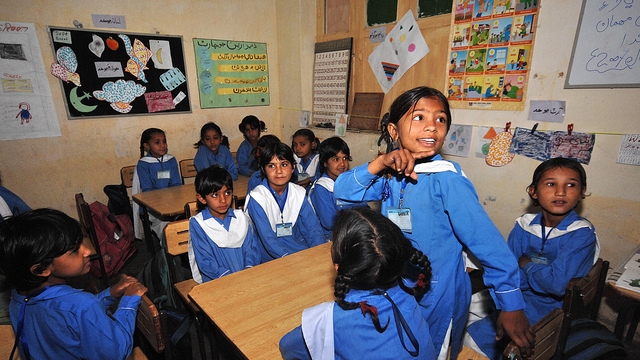 The World Bank team that’s been working in the education sector in Pakistan’s Punjab Province for more than a decade sought to determine whether making loans available to private schools that serve low-income students would lead schools to make investments that improve student learning. The study first tested the idea by offering schools a grant that was funded through a local institute.

Cluster randomized control trial. In the high-intensity treatment group, comprising 228 schools in 75 villages, every private school in the village was offered a grant. In the low-intensity group, only one school in each of 114 villages was offered a grant, resulting in 114 schools with grant offers and 264 schools without. The control group comprised 248 schools in 77 villages. Of the schools invited to participate, 322 received the full grant. Grants were disbursed between September 2012 and January 2013, with children tested in the period from May 2013 through November 2014.

The randomized control trial covered about 2,000 schools in about 650 villages across two districts in Punjab, Pakistan’s most populous province.

The evaluation found that in villages where every school was offered a grant—a typical village has three private schools and two government schools—schools used the money on teacher compensation, books, and infrastructure improvements. Enrollment and profits went up, and so did children’s test scores. In villages where only one school received a grant, money was mainly used on infrastructure and, while enrollment and profits went up, students didn’t learn more. The results not only showed that schools that invest can generate returns, but that making funding available to all schools in a market can spur competition that leads to quality changes in education, while supporting only one school may not achieve the same goal.

Together with a major microfinance institute in Pakistan, Telenor Bank and other partners, the team developed new financial products for schools that meet the Pakistani government’s loan and regulatory policies. The loans have been offered to some 2,000 schools in Punjab, and the effect on school performance and student achievement will be evaluated in a follow up experimental study of the program by the same SIEF-supported research team.

By showing that private schools that serve low-income families can improve when they have access to financing—and that quality improves even more when all schools in a market have access—the evaluation offers new approaches for governments and development groups seeking to support education.