Polluted water in urban poor communities transmits water-borne diarrheal diseases, such as cholera and typhoid, which can be particularly deadly to children. This evaluation studied whether an inexpensive water chlorination method installed in community hand-pumps reduced disease in poor communities in Dhaka, Bangladesh.

Studies have looked at the effectiveness of making available to households free or cheap chlorine (see: Evaluations for chlorination). But distributing chlorine requires changing people’s behavior so they use chlorine tablets or dispensers, which isn’t always easy.

This project was focused on a method to reduce the global burden of water-related illness by developing and implementing a low-cost, in-line chlorination technology that delivers chlorine automatically when water pumps are used. The results of this impact evaluation can help inform programs seeking to ensure clean water, potentially offering an alternative approach for reducing water-borne illnesses that can harm especially children’s development.

In Dhaka, more than 20 percent of the city’s 15 million residents live in slums and almost all rely on shared taps or handpumps for water. Efforts to market in-home disinfection technologies, such as chlorine products and filters, have not succeeded. Dhaka’s public water utility company has not considered installing disinfecting solutions at shared community distribution points because cost-effective technologies aren’t yet available. In this project, researchers used an inexpensive technology to automatically add chlorine to water dispensed at public taps and shared hand pumps. The technology had no moving parts and did not require electricity to operate. 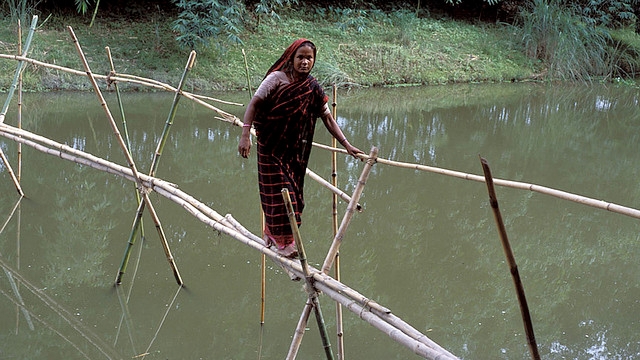 The intervention took place in low-income neighborhoods in Dhaka. Researchers randomly selected  shared water points that were connected to the municipal water distribution system. The shared water points were randomly divided into two groups: some were hooked up to a chlorine dispenser, and some were the control group.

The team helped the Dhaka water utility  install a simple chlorine dispenser at the shared water points in the treatment group. The local partner, icddr,b, conducted a one-hour education meeting with each household before the pumps were equipped with the technology. Follow-up promotional visits were held every two months for the first six months, then once every four months for the next eight months. The group icddr,b was responsible for resupplying chlorine to the dispenser every week.

Cluster randomized controlled trial. Each shared water points serves approximately 10-50 households. All households with at least one child living under the age of five were be enrolled.

A baseline survey, conducted before the chlorine dispensers are connected, collected data for each household related to:

The technology studied in this evaluation represents a realistic alternative for water utilities in need of affordable and effective disinfection technologies. The low-cost water disinfectant technology has the potential to be implemented at scale, and may represent a sound public investment. Clean water decreases disease and improves human capital while reducing healthcare costs.