In India, researchers will measure the impact of a child development pilot program that combines nutrition services with child stimulation outreach to mothers.

Stimulation in early childhood is critical for the development of healthy brains and bodies. Without appropriate stimulation during the first two years of life, children are hampered in reaching their potential and building the skills and confidence to do well later on. While countries often have long-standing nutrition programs in place for poor families, stimulation programs (which can be very expensive to implement) are less common. This evaluation of a program in India will provide useful evidence of the impact of different approaches for adding stimulation support to an already existing nutrition program.

India operates the world’s largest program for early childhood development, the Integrated Child Development Services. The program, which is meant to offer health, education and nutrition support for children up to the age of six, hasn’t performed as well as intended in all areas. Almost half of children younger than three years old are stunted and close to a quarter are malnourished. Infant mortality is higher than it is in other South Asian countries, including Bangladesh and Nepal.

In 2010, the government decided on shifting the program’s focus to children aged three and under and to better target pregnant women and nursing mothers. The new approach includes a commitment to using impact evaluation results to help identify and scale-up promising new approaches. A pilot program in Madhya Pradesh, a state of almost 75 million people in central India, will allow researchers to measure the impact of an additional early child stimulation dedicated community worker for improving child development. 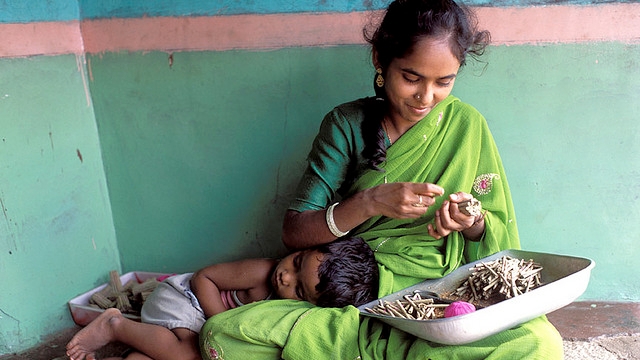 The government’s current program uses community centers, known as Anganwadi Centers (AWCs), to provide services. The pilot program seeks to improve early child development and nutrition through the addition of a dedicated staff member to act as early childhood mentors for newly married women and young mothers. This intervention will run concurrently with the centers’ usual nutrition-focused programs.

In the treatment group, a dedicated early childhood development worker is added to each Anganwadi Center to mentor pregnant women and new mothers. The mentor focuses on development of children under the age of three and provides, among other services, home visits, nutritional counseling and lessons on early childhood stimulation.

A baseline survey among households with at least one pregnant woman or children under the age of 24 months has been conducted. Follow-up surveys will take place 12 to 15 months into the program and again after 30 months. The baseline survey collected information on socio-economic conditions of the households as well as maternal knowledge and practices relating to child rearing and maternal depression. Children included in the intervention are evaluated using international standardized tests for motors skills, communication, social interaction, problem solving and cognitive development. Researchers also collect cost data from program implementers and state administrators.

The intervention will assess the benefits and costs of twinning early childhood development instruction with nutritional and health programs. The study will help the India government decide how to improve its national childhood development program, while offering guidance to similar national programs outside India.