The Development Objective of the proposed Universal Health Coverage (UHC) Window Phase III is to contribute to accelerating the progress towards UHC, and Health Security as core components of the Tokyo Joint UHC Initiative in additional low and middle-income countries (LMICs) by providing analytical and advisory Services, as well as technical assistance (TA) and capacity building support in critical areas. It will also support mitigation of the COVID-19 pandemic's effects on hampering and reversing progress towards the achievement of UHC and the health-related Sustainable Development Goals (SDGs).  For Key Results under UHC Phases I and II click here

"Universal health coverage is increasingly important when the state of global health is changing significantly. Japan succeeded in achieving universal health coverage in post-World War II, and the healthcare system contributed greatly to the expansion of a healthy and productive middle class, which propelled and supported economic growth. Continuous reform is necessary, even after creating a universal health care system, for assuring fairness, for increasing the quality of medical services and for maintaining fiscal sustainability."  Taro Aso, Deputy Prime Minister and Finance Minister of Japan (Global Conference on UHC, Tokyo, December 2013).

Expanding Knowledge to Promote Access to Universal Health Coverage for All

The year 2011 marked the 50th anniversary of Japan’s universal health coverage (UHC). To commemorate the achievement, the Government of Japan (GoJ) and the WBG carried out a multi-country study in 2011–13 to share varied experiences at different stages of adopting and implementing strategies for UHC, including Japan. The study helped the WBG respond to the growing demand from low- and middle-income countries for technical advice on the design and implementation of UHC policies and strategies. The collaboration highlighted Japan’s prioritization of global health at the technical and policy levels. Such prioritization was also underscored in Japan’s international diplomacy. At the Group of Seven (G7) summit held in Ise-Shima, Japan in May 2016, Japan led the declaration on the “Vision for Global Health” that articulated the commitment of G7 leaders to take concrete actions to advance global health, emphasizing that health is the foundation of economic prosperity and security.

Strategic Objectives:  The PHRD UHC program was established in 2016  to build on the recommendations of the Ise-Shima G7 Summit to promote UHC in developing countries; and incorporate the findings of the GoJ-WBG study.  The program aims to provide  analytical and advisory support to help low- and middle-income countries (that have strong potential to improve policies and promote UHC)  to develop and  implement strategies and capacities to adopt, achieve, and maintain UHC.   The PHRD UHC program also addresses the link between pandemic preparedness and strong health systems. Pandemics exact a heavy toll on human lives and social structures; the financial and economic damage is also devastating. The 2014–15 Ebola outbreak wiped out many of the pre-crisis development gains in Guinea, Liberia, and Sierra Leone. The WBG estimated that the three countries lost $2.2 billion in GDP in 2015 alone. Despite the progress made since the crisis to advance global pandemic preparedness and the increasingly dire risk of widespread epidemics, capacities in Africa are still insufficient. Attaining the goal of UHC requires countries to invest resources in pandemic preparedness (disease surveillance and response  capacity) and bolster their health systems. The PHRD UHC has assisted governments to develop and implement pandemic preparedness plans through the provision of advisory and capacity building services, in collaboration with the World Health Organization (WHO). 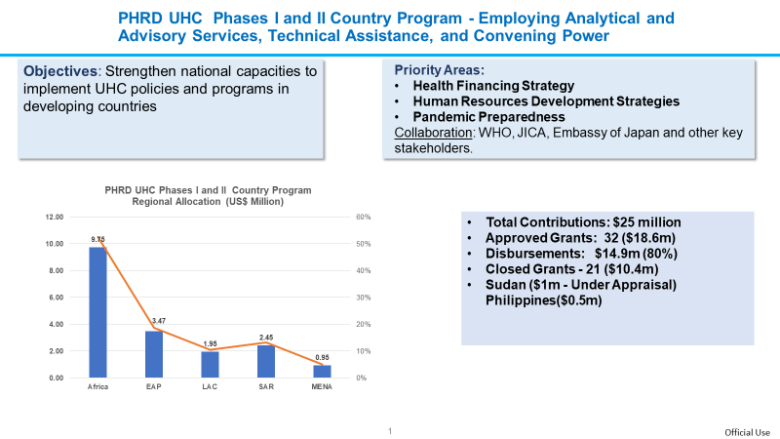 The PHRD UHC Phases I and II portfolio comprises 32 grants amounting to $18.6 million. The average size of the ASA grants is $0.58 million. Twenty-one (or 65%) of the grants (amounting to $13.2 million) have closed. The remaining eleven grants are under implementation and expected to close by December 31, 2021.