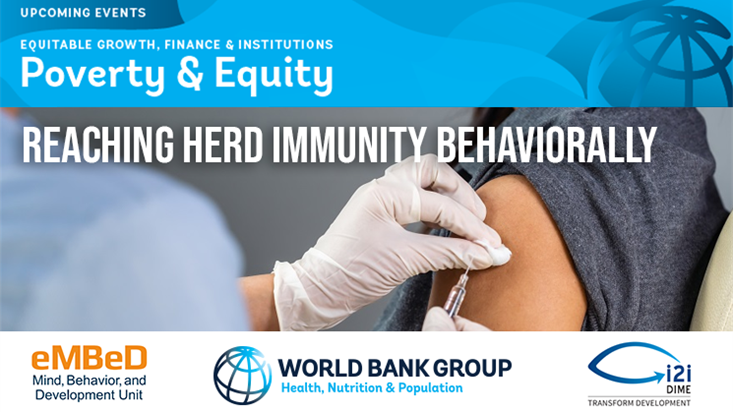 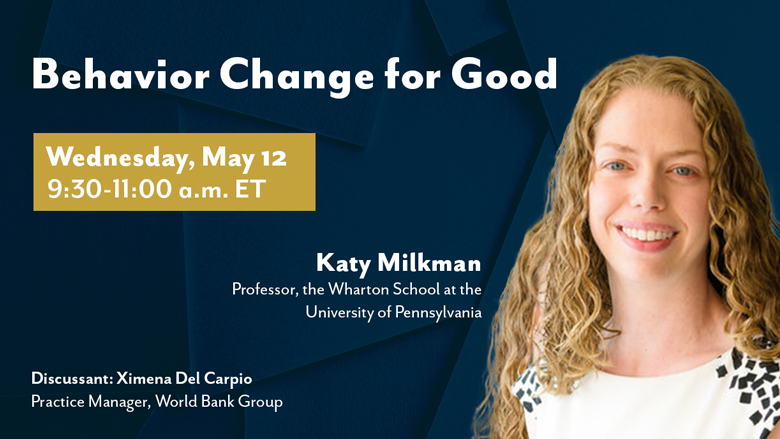 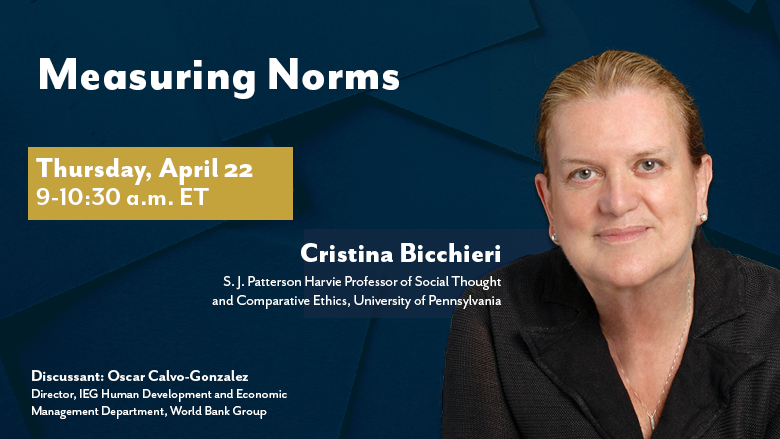 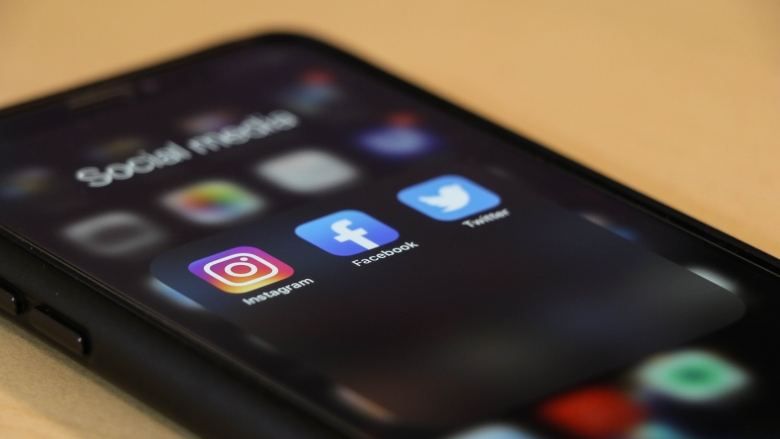 Using Social Media to Change Norms and Behaviors at Scale
See the recent eMBeD and DIME Webinar on how to use social media for behavior change. Read More » 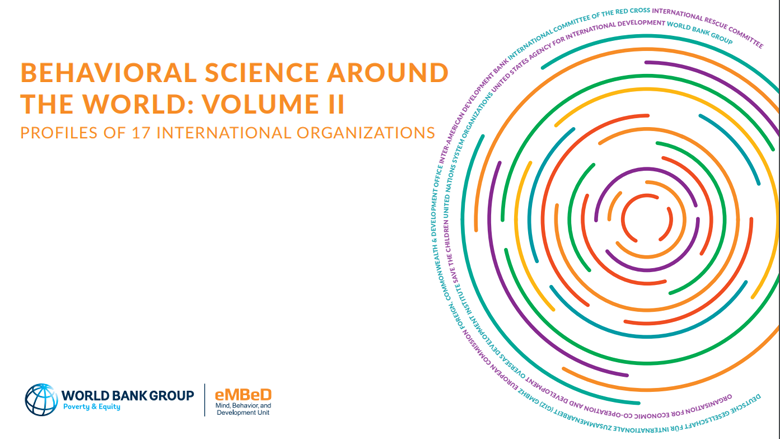 Behavioral Science Around the World Volume Two: Profiles of 17 International Organizations
Read eMBeD’s second volume on behavioral science across the globe, featuring international organizations such as the UN, the IDB, and more. Read More » 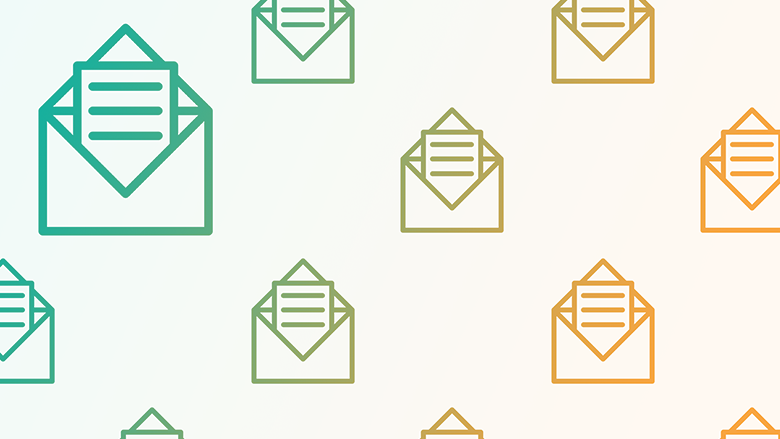 Learn More
Want to keep up with the latest news from the Mind, Behavior, and Development Unit? Subscribe to our newsletter. Read More »

Behaviorally informed policy emphasizes the importance of context for decision making and behavior. It examines a wide set of influences, paying attention to the social, psychological, and economic factors that affect what people think and do. It addresses details in bureaucracies, technologies, and service delivery that are often overlooked in standard policy design but that dramatically influence the effectiveness of development programs and projects, especially in low-income contexts. Behaviorally informed policy can provide creative solutions to difficult challenges, often at low cost. Finally, it helps policy makers themselves avoid some of the decision traps and biases that affect all individuals.

The Mind, Behavior, and Development Unit (eMBeD), the World Bank’s behavioral sciences team, works closely with project teams, governments, and other partners to diagnose, design, and evaluate behaviorally informed interventions. By collaborating with a worldwide network of scientists and practitioners, the eMBeD team provides answers to important economic and social questions, and contributes to the global effort to eliminate poverty and increase equity.

Download our brochure (in English, Spanish, French, Portuguese, or Arabic) to learn more.

eMBeD’s current portfolio spans 65 countries and a wide variety of thematic areas. All of our results briefs are available here. This page outlines some of our recent and ongoing projects from the areas of Learning and Beliefs, Health and Wellbeing, Financial Inclusion and Taxation, Gender and Equality, Youth Unemployment and Labor, Effective Organizations, and Mindstats and Measurement.

Reframing mindsets and changing lives. In Peru, together with the Ministry of Education, we reframed the beliefs of middle-school students by showing them that intelligence is malleable. The intervention led to a 0.14 standard deviation increase in math test scores, equivalent to four months of schooling, at a cost of less than $0.20 per student. eMBeD reached 50,000 students in an initial phase, and an additional 250,000 subsequently. Replicated interventions in South Africa and Indonesia have had similarly promising results.

Reducing teacher and administrator absenteeism. Although Peru exhibits overall low levels of teacher absenteeism, attendance rates are inferior in the poorest and remotest areas. The project consists of sending teachers weekly text or email messages on the importance of attending school using pro-social and social norms framing approaches. The results show a significant impact of the social norm message on directors, whose absenteeism was reduced by 3.7 percentage points on average, for an intervention which cost close to zero.

Changing social norms and mental models to increase toilet use. Despite efforts to improve access to better sanitation, India accounts for nearly 60% of the world's population that still defecates in the open. Beyond economic reasons, social norms, cultural beliefs, or mental models can and do constrain toilet use. This project identifies these normative and cultural barriers to toilet use, particularly among toilet owners, and design low-cost, community level behavioral interventions to address them.

Increasing uptake of long-acting reversible contraceptives (LARCs) by adolescent girls. Despite the high adolescent fertility rate in Cameroon, use of contraceptives, particularly LARCs, remain very low. This project aims to understand the interactions among social, psychological, behavioral, and neurodevelopmental processes that influence young women’s utilization of LARCs, and inform the design of both demand and supply side interventions, including counseling apps for adolescents, and training for health workers.

Overcoming structural barriers to improve outcomes for women and babies. In Haiti, low rates of prenatal and postnatal care, and institutional births, are all contributing factors to high maternal and neo-natal mortality rates. In an effort to provide actionable ideas to reduce mortality rates, this study sought to identify structural and behavioral barriers preventing women from attending prenatal care visits, and from delivering at a health institution.

Partnering for better financial inclusion. In Tanzania, we partnered with the wireless service provider Airtel on a project to encourage low-income individuals to save more using mobile money products. Based on the results of an initial diagnostic phase, we designed behaviorally informed text messages that highlighted social comparisons, mental accounting, and more. The most successful intervention increased savings by up to 11% within two weeks.

Using text reminders, framing and social norms to increase income tax compliance. Reminders are a cost-effective strategy to increase tax reporting and payment. Letters from the tax authority were sent to taxpayers (individuals and firms) who had failed to pay in Costa Rica, Guatemala and Honduras. The interventions increased the rate of payment as well as the average amount paid, more than tripling the tax receipts. After 12 months, the effects of the intervention persisted, sustaining the increased rate of payment.

Creating connections and empowering local women. In Nicaragua, the impacts on education and health investments of a productive cash transfer persisted two years after the program ended among beneficiaries who interacted with local female leaders. These households were 20 percentage points more likely to aspire to see their children in a professional career, showcasing how interactions with role models can be a powerful and cost-effective way to affect changes in attitudes towards the future.

Changing social norms to address sex preference at birth. Recent evidence from Georgia shows that parents’ preference for sons is distorting sex ratio at birth, which exacerbates gender inequality across generations. The study tests the effectiveness of an information campaign in altering and influencing parental perceptions, beliefs, attitudes, preferences, and behaviors toward their daughters. The campaign will be delivered through mass media and key service providers by appealing to the role of influential models.

Targeting women to diversity forest landscape productivity. In Mexico, although women's knowledge, skills, and experience are key to strengthening activities that reduce forest loss and degradation, they currently constitute only around 25% of forest program beneficiaries; their actual active participation is even lower. This project involved a qualitative analysis in rural areas of Mexico in 2018 to understand better women’s underlying socio-cultural barriers, as well as map their decision-making process, motivations, influencing agents, and other factors that can affect their decisions to participate in programs.

Encouraging female labor force participation among refugees and Jordanian nationals. Jordan has made significant progress in educational attainment, particularly among women. However, female labor market participation is low and has recently dropped to 13 percent. The project systematically measures social norms and cultural beliefs to better identify barriers to increased participation, and will subsequently inform interventions that aim to change these.

Increasing charitable donations among World Bank staff. eMBeD ran a study on World Bank employees during their giving campaign, the Community Connections Campaign (CCC). Altogether, the interventions run by eMBeD, including reciprocity, timely messaging, short and clear language, and encouraging early commitment, the average donation rose by more than 30% relative to the previous year, and raised an estimated $29 for every $1 spent on the interventions.

Measuring teacher biases toward poor students. In an experiment involving 600 public school teachers in Lima, Peru, the World Bank tested whether teachers who were asked to evaluate the scholastic aptitude, behavior, and education potential of a student were unconsciously biased towards him when prompted by socio-economic markers. We found that teachers use a student’s socio-economic background to assess his scholastic aptitude.

Measuring welfare in conflict-affected regions. The Nigerian National Bureau of Statistics, in collaboration with the World Bank, collected a nationally representative sample via a new round of the General Household Survey Panel conducted in 2015-2016. Our findings suggest that chronic depression is likely to have both short- and long-term effects on welfare in Nigeria, and also seems to affect intra and inter-generational channels of upward mobility.

The Mind, Behavior, and Development Unit works closely with a number of World Bank teams on project publications and deliverables. Below are some of the projects in which we’ve been involved.

eMBeD partners with governments, NGOs, universities, and organizations in addition to our work with World Bank teams. Some of our partners include: the Bill & Melinda Gates Foundation, the Deutsche Gesellschaft für Internationale Zusammenarbeit (GIZ), the Regional Government of Catalonia, the Behavioural Insights Team, Innovations for Poverty Action, The Abdul Latif Jameel Poverty Action Lab, ideas42, The Consultative Group to Assist the Poor, The United States Agency for International Development, The Department for International Development, United Nations Population Fund, United Nations Development Programme, Irrational Labs, Duke University, the University of Pennsylvania, Oxford University, the University of Chicago, Princeton University, Bank Negara Malaysia, the Department of Statistics with the Government of Jordan, the University of California at Berkeley, and more. We have over 70 partners with projects in more than 50 countries. 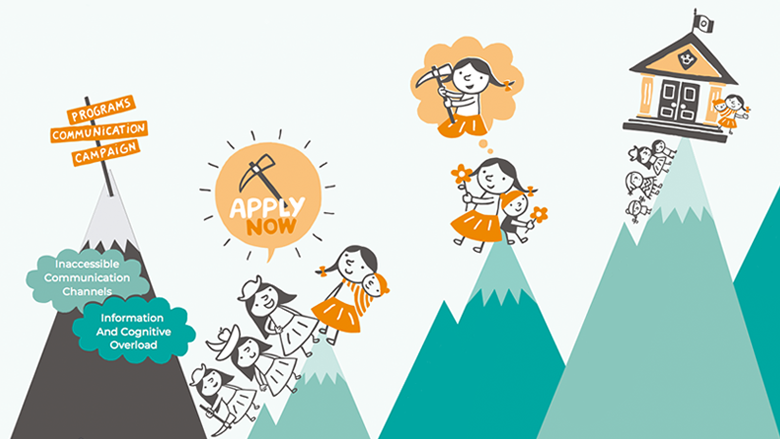 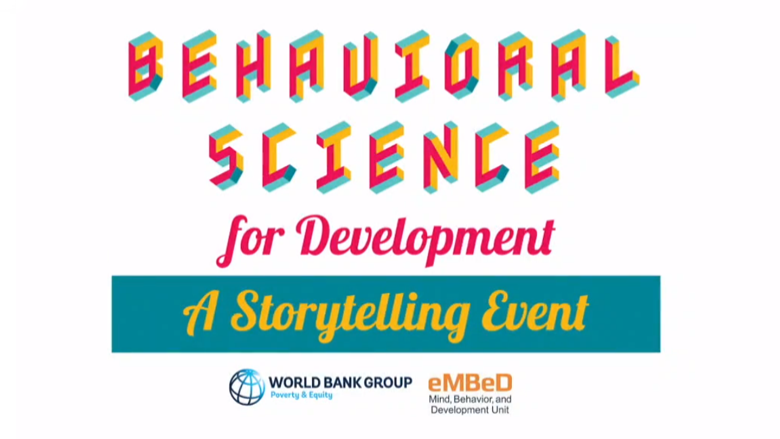