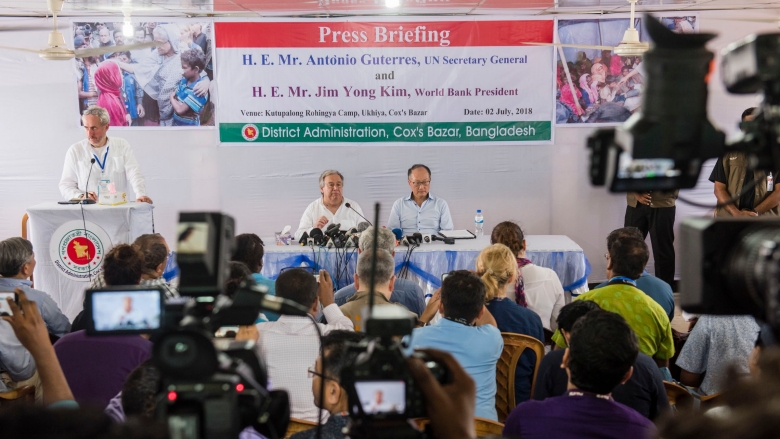 Thank you very much Secretary General. First of all, I want to say that we, at the World Bank Group, are now very much involved in the refugee situations. Because of Antonio Gueterres, when he was head of the High Commissioner of Refugees, I heard him give a presentation of a situation in northern Lebanon that moved me deeply, and we decided from that point, five years ago, we could not as the World Bank, the largest financer of development of the world, turn our heads away from the situations of refugees. We continued to work extremely closely with Filippo Grande, the head of UNHCR, the high commissioner. Because we believe that the situation of refugees in the world is everybody’s problem. This is not a problem for the host country only; this is not a problem for just the refugees, this is everybody’s problem. Now I endorse completely and we have been very clear: the World Bank Group stands with and next to the Secretary-General of the entire UN system in insisting on the condition that were laid out very clearly in the Kofi Annan report.

We believe that everyone has a right to not fear discrimination, they have the right to access education, access to health care, access to livelihood. And in this situation, we heard heartbreaking stories of what happened to these people who were simply trying to live their lives in their homes in Rakhine state. My commitment is the following.

We went in extraordinary circumstances; we have not done this before. We will provide an initial tranche of 480 million dollars in grants for Bangladesh to support the Rohingya. And we know that the need is greater than that and we have been planning with our colleagues, the United Nations, for the things that will be required to help them live a dignified life here.

Now we completely agree that right of return with all the conditions that have been agreed to and that’s the first priority, but in the meantime the people here are living in extremely difficult conditions. I just want to say this: I was humbled, I was moved, and I was extremely touched by the courage of the women and men that we met today. You know in extremely difficult conditions, they kept repeating again and again, their first priority is justice. Their first priority is dignity and we stand completely in solidarity with them. Not only will we provide 480 million dollars for specifically programs focused on refugees, but also this year we lent a record amount of very low interest development assistance to Bangladesh, more than three billion dollars, the second largest amount in the world. The reason for that is because we believe in the direction Bangladesh is going in terms of its development but we also feel that what Bangladesh has done in opening its borders to Rohingya is something that we must support. But there is much, much more to do.

You know there is a famous story of a king in the Nordic country who during the Holocaust – when they required that all Jewish people wear a yellow star – this king wore a yellow star himself because he said today we all are Jewish. So, I would suggest to all of us that this is one of the worst situations. I have spent my entire life in developing countries providing health care, education for the poorest people; this is one of the worst situations I have ever seen. Today, we are all Rohingya. We have to stay in solidarity with them so that they can live a life with dignity. In their demand towards such basic things that just about everyone else in the world enjoys. The work is not done, it’s just getting started. We, as a World Bank Group, are committed to doing more and more to make sure that the Rohingya, all of us, can seek justice.

The World Bank in Bangladesh