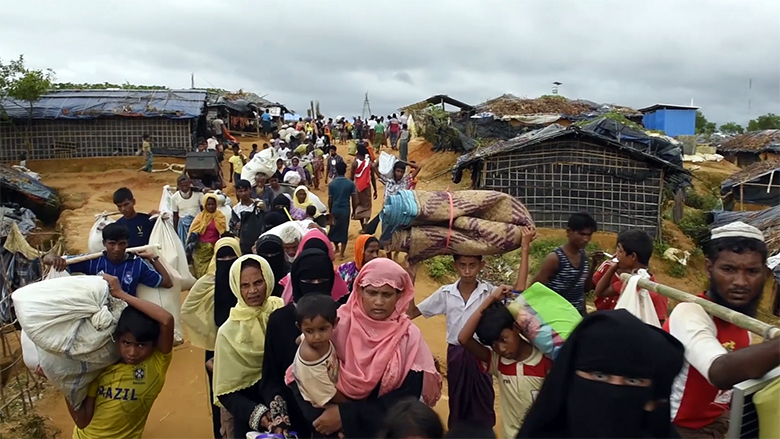 Reflecting the increasingly protracted nature of the Rohingya crisis, the World Bank Board of Directors today approved a $50 million additional grant to an existing Health Sector Support Project in Bangladesh that is the first in a series that could total as much as $480 million.

The health-sector grant includes contributions based on an innovative partnership between the Government of Canada and the International Development Association (IDA), the World Bank’s fund for the poorest countries. It will help the Rohingya receive maternal, neonatal, infant, child, and adolescent health and nutrition services, as well as reproductive health care and family planning support.

“Bangladesh has shown great leadership in this evolving humanitarian crisis by providing refuge for the Rohingya people. This grant allows the World Bank Group, working in collaboration with the Government of Canada, to support these efforts,” World Bank Group President Jim Yong Kim said. “We are deeply moved by the suffering of the Rohingya people and stand ready to help them until they can return home in a safe, voluntary, and dignified manner. At the same time, we are also continuing to support the Bangladeshi people and the host communities, who have shown great generosity by welcoming these refugees.”

The healthcare needs of the Rohingya are vast, and their vulnerability to disease outbreaks and the prevalence of child malnutrition are high. According to surveys conducted in the camps, one in every four children is acutely malnourished.

“We are pleased to partner with the World Bank and the Government of Bangladesh in providing additional support for the displaced Rohingya in Bangladesh,” said Marie-Claude Bibeau, Minister of International Development of Canada. “Through this innovative initiative, for every dollar contributed by Canada, five additional grant dollars will be unlocked in support of much needed health, nutrition and population services for the refugees.”

Seasonal rains, causing flooding and landslides, will have important health impacts, including injuries, exacerbation of water-borne diseases, and reduced access to health services. It is estimated that 200,000 people are at risk of landslides and floods during the monsoon season.

“Bangladesh has sheltered the Rohingya people fleeing from violence in Myanmar because it is the right thing to do for fellow human beings. But their needs are enormous and the world needs to step up support,” said Honorable Minister of Finance, Mr. A.M.A Muhith, Government of Bangladesh. “The World Bank has been very prompt in supporting us with nearly half-a-billion dollars grant to help the Rohingya people with their safe, voluntary and dignified return to Myanmar. We are committed to addressing the basic needs of these unfortunate refugees.”

The World Bank Group President Jim Yong Kim, along with the United Nations Secretary General António Guterres, will visit Bangladesh on July 1-2 to assess the severity of the crisis and discuss what more can be done. They will visit the Rohingya settlements in Cox’s Bazar and meet with the Prime Minister, Finance Minister, other senior government officials, and representatives of civil society and other partners.

In addition to health challenges facing the Rohingya, the learning needs of highly vulnerable refugee youth and children are emerging as another priority. Approximately 370,000 children and youth (55 percent of the total displaced Rohingya population) need access to schooling. An additional grant to the education project, currently under preparation, will provide basic education and psycho-social support to refugee children and youth. The subsequent proposed investments will be in the areas of disaster risk management, water and sanitation, environmental protection and conservation, social protection, urban services, and social cohesion and gender.

Since August last year, more than 700,000 Rohingya have taken shelter from violence in Myanmar in the Cox’s Bazar District in Bangladesh, making it the world’s largest and fastest growing refugee camp, and putting pressure on the environment, existing infrastructure, and social services that were already constrained. The World Bank funding for Bangladesh to cope with the crisis will include up to $400 million on grant terms to support the Rohingya refugees from the IDA18 Regional Sub-window for Refugees and Host Communities.

The World Bank was among the first development partners to support Bangladesh following its independence. Since then, the World Bank has committed close to $29 billion in grants and interest-free credits.