Statement of Tony Thompson: World Bank’s Global Doing Business Ranking and How it Relates to Plovdiv

Dear President of Republic of Bulgaria,

It is an honor to be here today.

Thank you for inviting me to this event to present the World Bank’s latest Doing Business global ranking results and to describe what we are doing in support of the government's agenda to improve the business environment in the country.

It is especially great to be doing this in Plovdiv. Plovdiv stands out within Bulgaria – its young and dynamic leadership team has demonstrated its pro-business mindset by implementing strategic and effective measures to attract and facilitate new investments to Plovdiv. Both the President and the Mayor have eloquently presented many of these measures, so I won’t repeat them.

The Plovdiv phenomenon is an impressive example of what is working well in Bulgaria, an example that has helped us to prepare and successfully report before the World Bank Board of Executive Directors our new Partnership Framework for Bulgaria, which outlines the parameters of our support over the next 6 years.

Can you guess which number which Bulgaria ranking represent?

The World Bank’s Doing Business focuses on areas and regulations which can be addressed rapidly. Governments with a strong political commitment to reform can implement reforms and advance in the ranking relatively easily and quickly. In this regard it is unlike the World Economic Forum competitiveness index - advancement in which requires much deeper structural reforms results of which generally register over a longer period of time.

Albania and Belarus Doing Business rankings are good examples of what can be achieved within a very short time. In one year Albania climbed 32 places and is now ranked 58 from 90 in the previous year. Belarus used to be at 50 position but now is 13 places up ranked even higher than Bulgaria at 37 place.

The DB global ranking focuses on 11 areas of business regulation which affect firms throughout their life cycle: from starting a business, to resolving insolvency.

The 14th edition of the World Bank’s Global Doing Business report for 2017 was launched last week (October 25). Among 190 economies measured by Doing Business 2017, New Zealand, Singapore, and Denmark are at the top on the overall ease of Doing Business.

Meanwhile, Bulgaria, ranked at 39, is ahead of Croatia, Cyprus, Greece, Israel, Russia, Italy and Belgium.

Here you can see Bulgaria’s scores in different indicators: the country is doing very well in certain indicators, for example minority investor protection and trade, while there is significant room for improvement in others, notably getting electricity.

A fundamental premise of Doing Business is that economic activity requires good rules which are efficient in their implementation and simple in their interpretation so as to create a level playing field for all economic actors, regardless of their size (multi nationals and SMEs alike).

The global report measures regulations and their implementation in the largest business city. In Bulgaria, it covers Sofia.

Please note that Doing Business does not measure all aspects of the business environment such as security, macro-economic stability, prevalence of bribery and corruption, level of training and skills of the labor force, proximity to markets, or regulations specific to foreign investment.

As you may know I am country manager for the Czech Republic and Slovakia, as well as Bulgaria.  A couple of weeks ago I was visiting Czech Republic where their government is eager to improve the country’s ranking (currently 27).  Their weakest area is in construction permits (where they are rated #130) so clearly this where they are focusing their efforts to improve. This shows the value of the Doing Business analysis as it clearly points to where countries can concentrate their reform effort for greater effect.

The Government of Bulgaria has also been talking with us about how to improve the country’s rating. As part of this dialogue we prepared a more in-depth analysis of the specific measures that would boost the various rankings – what we call a Doing Business Reform Memorandum. 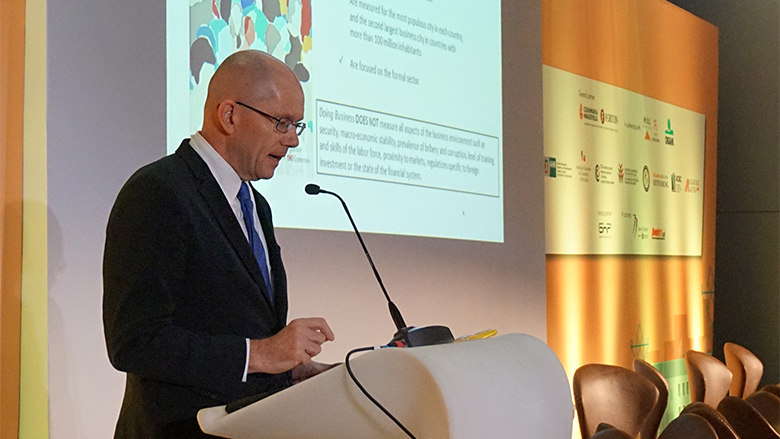 At this level we look, not only at the business regulations themselves, but also at their practical effectiveness in implementation and differences in interpretation of national law.

The aim of this approach is to identify good practices across different cities within the same country that can be adopted in other parts of the country thereby improving the business environment locally.

We are currently undertaking such a subnational DB study in Bulgaria and 5 other EU Member States: Czech Republic, Hungary, Portugal, Romania and Slovakia (these countries have expressed interest in the study and are beneficiaries of cohesion funds). The study is funded by the European Commission, Directorate General for Regional and Urban Policy. Within the EU, the report follows successful reports in Spain, Poland and Italy.

In Bulgaria, the study is conducted is partnership with the Council of Ministers and with the collaboration of other institutional stakeholders at national and local level. And here is where I must acknowledge and thank the many respondents in Plovdiv and the other municipalities for their great efforts to complete the very detailed questionnaires.

The study assesses the business environment in 6 major cities in Bulgaria (representing all administrative regions NUTS2), including of course Plovdiv and 5 other municipalities. The final report will include rankings of cities in the 5 categories analyzed, and make recommendations for reform.

To be frank the report leverages a natural competitive spirit that the results create to stimulate reform measures. For these cities wanting to strengthen their business environment the report provides analysis that lets them move forward most effectively and efficiently.

Another 35 cities will be included in the study in Romania, Slovakia, Hungary, the Czech Republic, and Portugal. The study will be conducted in two stages: the first stage includes Romania, Bulgaria and Hungary and we expect the results to be ready in the spring of 2017.

Again, many thanks for your kind invitation to speak today’s conference. Let me wish you success for the rest of the event.