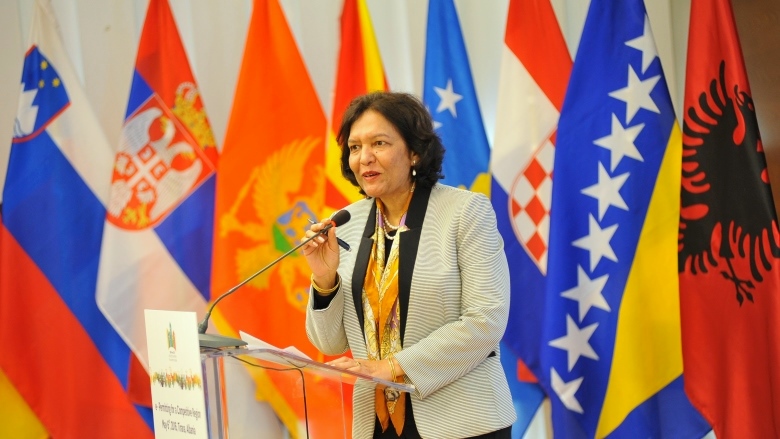 I would like to thank you for the invitation to join this important international conference.  I found the topic “E permitting for a Competitive Region” an apt and most relevant title for this event.  Building competitiveness at both country and regional level is essential for economic growth and job creation. At the same time, improving the investment and business climate is essential to build competitiveness.  In this regard, reforms in area of construction permits, the topic of today’s event, make an important contribution towards reducing the hurdles in doing business and increasing both domestic foreign investments within the countries and in the region.

Making it easier to do business in each of your countries will increase the competitiveness of your economies – thereby contributing to growth.  The World Bank’s recently issued Southeast Europe Economic Report shows that the countries of South East Europe are projected to have grown at 2.1 percent on average in 2015 – a highly encouraging improvement from the 0.3 percent growth in 2014 when the region suffered devastating floods.

A key contributor to this growth has been revival of investment, particularly private investment - both foreign and domestic. Exports too have contributed towards this improvement in growth. While domestic consumption still remains an important economic driver in the region, a shift toward private investment and exports signals early signs of progress on a gradual rebalancing of the sources of growth.

The report also highlights the need to pursue a long term reform agenda centered on five pillars.  These are: eliminating disincentives and barriers to formal employment, improving the business climate and governance, reducing the size of government while simultaneously improving the quality of service delivery for citizens, deepening trade and financial integration, and ensuring the sustainable use of natural resources. As you will note, two key pillars are improving the business climate and deepening trade and financial integration.

The Western Balkan economies need to build on this encouraging growth in 2015 and accelerate their export engines because no small country (below 10 million people) has ever achieved high-income with less than 50 percent of GDP in exports. Trade bottlenecks also require simplification as a one-day delay reduces the export value of most goods by 1% and for agricultural products it is reduced by as much as 7%.

Making it easier to do business in each of your countries will increase the competitiveness of your economies – a key driver for economic growth and job creation. Decreasing administrative burdens for businesses and removal of barriers to regional trade and investment offers the opportunity for economies of scale, geographically diversified businesses, and an overall more efficient allocation of resources within regional markets.

Reducing the barriers for investments include reforms in the area of construction permits. I would like to congratulate Minister Gjermeni for her leadership for successfully leading the implementation of the construction permit reform in Albania.  Under her leadership, the team at the Ministry of Urban Development has worked hard and delivered on a range of high priority areas including moving forward the construction permit reform. The World Bank Group is glad to have partnered in this area and we remain committed to provide further assistance. Because of these efforts, Albania has come a long way since last year, when no permits were being issued by Municipalities.

Today, Municipalities have resumed issuing of permits and many can now process permits applications through an electronic platform. This modern and efficient practice will not only reduce the time and cost to the private sector, but will improve transparency and decrease possibilities for corruption.  We know from evidence-based research that less cumbersome regulations are correlated to better governance and better institutions. For instance, all 29 OECD economies which rank in the top 50 on the ease of doing business, score in the top quartile globally on measures of efficient regulatory processes and strong legal institutions.

Experience in regulatory reform shows positive impact on firm growth and employment. The introduction of One-Stop Shops for company registration in Mexico led to a 6% increase in the number of new firms and a 2.6% increase in employment. Following a land titling project in Thailand, property increased in value by 75–197% after being registered.

Still more remains to be done in Albania, and in several other countries of the region as well, to attract investment, increase growth and improve competitiveness. Making it easier to receive construction permits is certainly a necessary step forward but not sufficient.  In Albania, local businesses and investors face other difficulties such as extensive time and cost needed to get connected to the electricity grid and to resolve commercial disputes in the courts. The investment policy framework also needs to be strengthened and aligned with international good practices, which can help spur local business development, and attract and retain foreign investments.

Today’s event highlights the increased regional cooperation among Western Balkan Countries. The power of economic integration has worked across the world and holds significant potential for the economies of South East Europe in achieving a higher degree of market integration, reducing poverty and increasing prosperity. Singapore increased its GDP per capita from below $500 in 1960 to more than 55k today. When Singapore started it had about the same size as Albania with some 3 million people. The secret of Singapore's success was trade integration. Today, exports represent 200 percent of GDP.

In your efforts to achieve your countries’ full economic potential, it is important to work in unison and continue to exchange regional best practices and learn from experiences.

I hope you have very fruitful discussions during the course of the day. 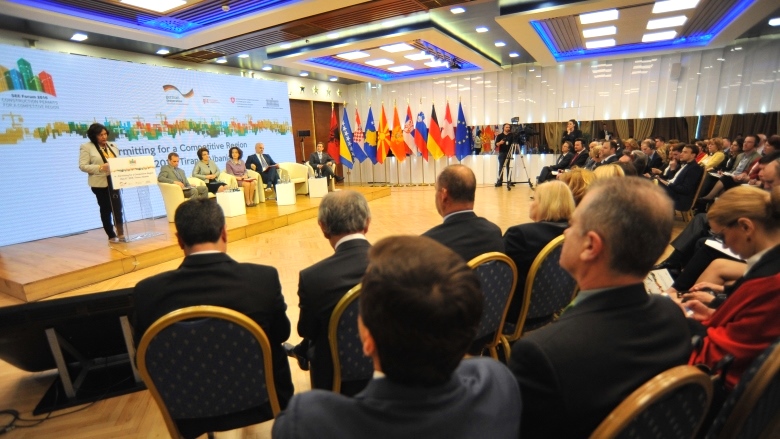