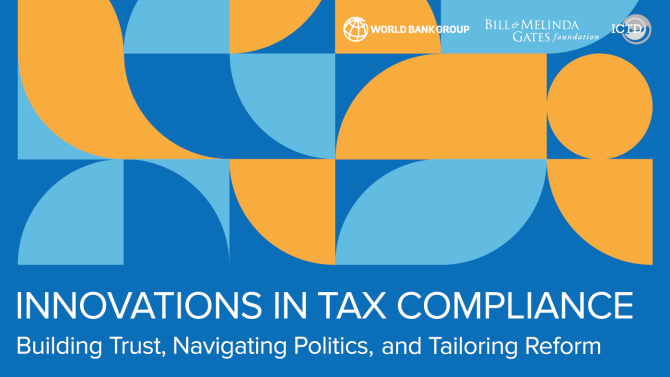 WASHINGTON, Feb. 17, 2022 — In many developing countries, tax revenues remain far below levels needed to provide citizens with basic services or fund extra spending to minimize the impact of COVID-19. But as governments look for ways to strengthen tax collection systems, they must take a holistic approach to tax reform that includes building citizens’ trust, says a new World Bank report.

Innovations in Tax Compliance: Building Trust, Navigating Politics, and Tailoring Reforms outlines a novel, integrated framework for improving tax systems based on three core pillars: enforcement, facilitation, and trust. According to the report, when implemented alongside reforms to boost enforcement and improve facilitation, strategies to increase trust between taxpayers and tax administrations can lead to higher rates of compliance and build a foundation of public support for more effective taxation.

“Discussions about how to raise extra resources are especially relevant now that governments across the world are having to substantially increase public expenditure to protect people and economies from the damage wrought by the pandemic,” said Marcello M. Estevão, the Bank’s Global Director for Macroeconomics, Trade and Investment. “Fiscal pressures are growing because of record-high levels of debt in lower- and middle-income countries and because of the need to transition to a green economy.”

Tax reforms have leaned heavily toward strengthening tax enforcement and facilitating compliance, with sanctions for citizens and corporations that avoid paying their obligations and mechanisms that make it as easy as possible for taxpayers to find out what they owe and make payments. Despite important successes, these efforts have not been sufficient to consistently deliver more effective, equitable, and accountable tax systems. In fact, taxation of the wealthy remains highly ineffective in many countries. Weak taxation in many places appears rooted in political resistance to more effective taxation, low trust and compliance, and the difficulties posed by wealth held offshore.

Recent research has shown that a lack of trust in the state’s role as both tax collector and service provider remains an important deterrent for many would-be taxpayers to enter the formal economy or pay their full taxes – and undermines broader political support for reform efforts.

The report was supported by the Bill & Melinda Gates Foundation and the World Bank’s Global Tax Program.