Improving Governance Is Key to Ensuring Equitable Growth in Kazakhstan 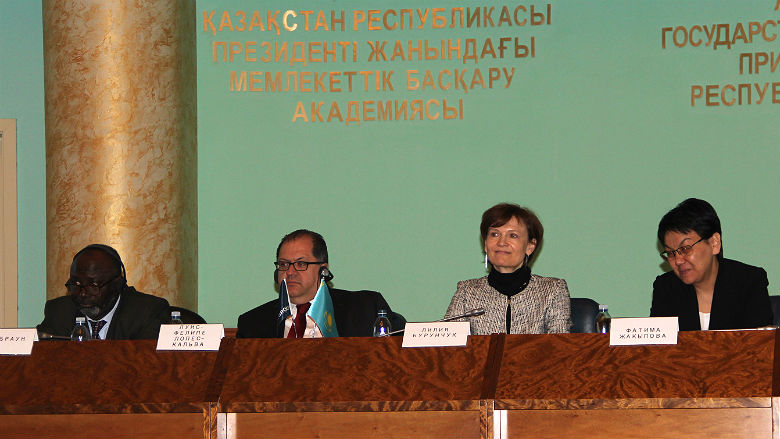 Presentation and discussion on the World Development Report 2017: Governance and the Law, Astana, Kazakhstan.

ASTANA, May 16, 2017 – A new World Bank policy report was presented in Astana today, urging the country and international development agencies to rethink their approach to governance as a key to overcoming challenges related to security, growth, and equity.

The 2017 World Development Report: Governance and the Law explores how unequal distribution of power in a society interferes with the effectiveness of policies. Power asymmetries help explain, for example, why model anti-corruption laws and agencies often fail to curb corruption, why decentralization does not always improve municipal services, or why well-crafted fiscal policies may not reduce volatility or generate long-term savings.

The report notes that when policies and technical solutions fail to achieve intended outcomes, institutions often take the blame. However, it finds that countries and donors need to think more broadly to improve governance so that policies succeed. It defines better governance as the process through which state and non-state groups interact to design and implement policies, working within a set of formal and informal rules that are shaped by power.

During the event, representatives of three branches of power in Kazakhstan informed the public about the progress and challenges the country faces on its way toward building a Kazakhstani model of good governance. Think tanks and academicians, as well as non-governmental and international organizations, also joined the discussion.

“Kazakhstan managed to translate its economic growth into improved standards of living for its people. However, to sustain this progress and overcome the current economic downturn, a number of governance challenges and gaps need to be addressed, as this can potentially undermine the sustainability of the development process,” says Lilia Burunciuc, World Bank Country Director for Central Asia.

Based on extensive research and consultations in many countries over the past two years, the report proposes principles to guide reform and change the dynamics of governance for equitable development.

According to the report, unequal distribution of power can exclude groups and people from the rewards and gains of policy engagement. Yet meaningful change is possible with the engagement and interaction of citizens, through coalitions to change the incentives of those who make decisions; elites, through agreements among decision makers to restrict their own power; and the international community, through indirect influence to change the relative power of domestic reformers.

As the report notes, successful reforms are not just about “best practice.” They require adapting and adjusting institutions in ways that build more effectively on local dynamics and address specific problems that continue to stand in the way of development that serves all citizens.