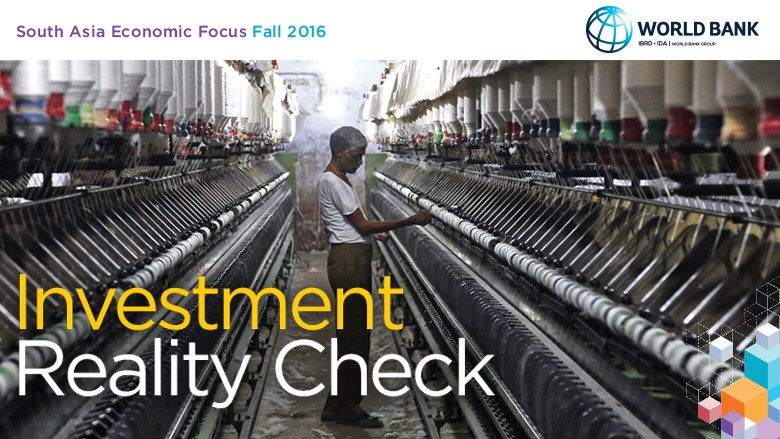 A worker tends to yarn-spinning equipment at a factory in South Asia. The region's economic growth is expected to accelerate in the years ahead but will require greater investment to sustain the momentum. Read Full Report (PDF)

WASHINGTON, October 3, 2016 – South Asia has defied a sluggish world economy and solidified its lead as the fastest growing region in the world in 2016, a new World Bank report said today. Led by solid performance in India, economic growth is expected to gradually accelerate from 7.1 percent in 2016 to 7.3 percent in 2017.

According to the twice-a-year, South Asia Economic Focus, the region remains a global growth hotspot and has proven resilient to external headwinds such as China’s slowdown, uncertainty around stimulus policy in advanced economies, and slowing remittances. The main challenges remain domestic, and include policy uncertainty as well as fiscal and financial vulnerabilities.

Given its weight in the region, India sets the pace for South Asia as a whole. Its economic activity is expected to accelerate to 7.7 percent in 2017, after maintaining a solid 7.6 percent in 2016. This performance is based on solid growth contributions from consumption – boosted by normal monsoon and civil service pay revisions. Over the medium term, accelerated infrastructure spending and a better investment climate may help increase private investment and exports.

A reality check on the state of private investment in South Asia shows that the region has fallen short of expectations. Mobilizing domestic savings remains key at the aggregate level. However, remittances and foreign direct investment prove very effective on a per-dollar basis, and the region should make the most of them. India can further rely on public infrastructure to crowd-in private investment, while finance may constrain investment in Pakistan. The business cycle matters all across the region, providing a potential accelerator from GDP growth to investment growth. Ultimately, the investment climate sets the broader stage. Alas, most South Asian economies suffer from a challenging business environment and some are subject to broader uncertainty and insecurity, which is detrimental to investor confidence.


Factsheet: Many South Asian Countries Show Potential to Accelerate Growth
Many South Asian countries show potential for accelerated growth in the short to medium term. However, countries will need to sustain domestic demand as a pillar of growth while reactivating exports and the tapping the potential of private investment. 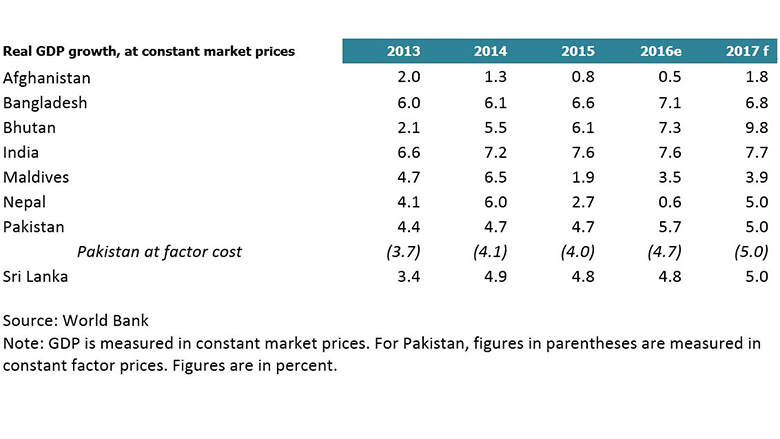 Afghanistan’s economy is expected to make a slow recovery over the next three years. Growth is projected to decline to 0.5 percent in 2016, and gradually increase to 1.8 percent in 2017.  Modest recovery is expected over the next three years predicated on political stability and strong reform implementation. While the fiscal situation has stabilized, risks remain pronounced as substantial donor grants are required to meet the country’s basic development needs over the medium term.

Growth in Bangladesh has remained robust despite internal and external headwinds. Growth will be sustained at 6.8 percent in 2017, coming slightly down from 7.1 percent in 2016 and with most economic indicators being stable. Delivering the necessary energy, infrastructural, and regulatory improvements remains critically important to ensure sustained and inclusive GDP growth with strong employment creation capacity.

Economic activity in Bhutan has remained strong and the economy is expected to grow at 7.1 percent in 2016 and 9.8 percent in 2017. Hydropower projects, supportive fiscal and monetary policy coupled with low inflation, a stable exchange rate and accumulating international reserves have contributed to growth and poverty reduction. However, the country will need to address its large current account deficit, an underdeveloped private sector and high youth unemployment.

In India, GDP growth will remain strong at 7.6 percent in 2016 and 7.7 percent in 2017, supported by expectations of a rebound in agriculture, civil service pay reforms supporting consumption, increasingly positive contributions from exports and a recovery of private investment in the medium term. However, India faces the challenge of further accelerating the responsiveness of poverty reduction to growth, promoting inclusion, and extending gains to a broader range of human development outcomes related to health, nutrition, education and gender.

In Maldives, GDP growth is expected to remain modest at 3.9 percent in 2017, up from 3.5 percent in 2016, but held back by a slowdown in tourist arrivals, especially from Russia and China. While tourism is still the single largest sector, construction has overtaken tourism as the most important driver of growth. High levels of debt and lack of economic opportunities for youth remain problematic

Nepal has had a difficult year due to the earthquake, border disruptions with India, and reduced remittances. Its economic activity is recovering with growth expected to rebound to 5.0 percent in 2017, after a weak year 2016 at only 0.6 percent growth. Agriculture and construction are expected to improve on the account of a good monsoon, while increased disbursements of housing reconstruction grants will help as well.

In Pakistan, economic activity is projected to gradually accelerate over the medium term reaching 5.0 percent in 2017 and 5.4 percent in 2018, building upon 4.7 percent GDP growth at factor cost in 2016 (5.7 percent at market prices). Economic growth is primarily driven by public and private consumption, however some rebalancing in growth components is expected due to a rise in investment. This will primarily be driven by infrastructure projects under the China Pakistan Economic Corridor (CPEC) and related public investment. These projects should help accelerating growth in the domestic construction industry and increase electricity generation. Sustainable and inclusive growth and poverty reduction, however, will require greater private sector investment and the development of infrastructure in the medium term, as well as a continued focus on fiscal consolidation and structural reforms

Sri Lanka’s economic growth is projected to grow at 5.0 percent in 2017, up from 4.8 percent 2016 and driven by increased private consumption and postponed investment in 2015. It is imperative for Sri Lanka to expedite high priority structural reforms to increase competitiveness, improve governance and consolidate its fiscal balance in order to ensure sustained growth and development.