From Aspirations to Occupations: More and Better Jobs Are Critical for Moldova’s Growth

Chisinau, June 24, 2016 – Young job-seekers need a comprehensive career guidance system and better information on education choices and employment opportunities, reveals the World Bank’s report From Aspirations to Occupations: The Role of Information in Educational and Labor Market Decisions in Moldova. For the first time in Moldova, this report addresses how students make decisions, what information they use and who they consult, as well as what career guidance they find useful.

The scarcity of good jobs is illustrated by the low employment rate – about 40 percent of adult Moldovans work, compared to 50–60 percent in other countries in Europe and Central Asia. The low productivity of existing jobs is the result of both a high share of jobs in low-productivity sectors, such as agriculture, trade, and tourism, and the relatively high incidence of informal labor, comprising almost 30 percent of the employed. In addition, 40 percent of firms in Moldova cited skills as a major or severe constraint to growth in 2013, one of the highest rates in Europe and Central Asia.

Using newly-collected survey data and focus group discussions, the study looks at sources of information used by students in educational and labor market decisions. Parents, in particular, were cited as a main source of information and often co-decision makers for surveyed students; worryingly, in focus groups, parents often admitted feeling unprepared to advise their children. Students with less-educated parents demonstrate the highest information deficits, which may exacerbate inequality. A majority of respondents of the survey reported not having attended any career guidance activity, and only a few were aware of existing tools.

“With an aging population and high emigration, every Moldovan worker counts,” said Alex Kremer, Country Manager for Moldova. “Informing young people about labor market opportunities is a low-cost way of getting Moldovans into more productive jobs.”

Policy recommendations from the report focus on making education and labor market information more user-friendly and relevant, identifying the needs of children and youth and providing relevant information to them and their families, building up partnerships with employers and creating better career guidance tools.

“An effective system of career guidance would be anchored in strong networks, involving the collaboration and coordination of numerous stakeholders. It would also ensure exposure to the world of work as an integral part of education and training systems,” said Victoria Levin, one of the main authors of the report.

Since Moldova joined the World Bank Group in 1992, over US$1 billion has been allocated to approximately 60 projects in the country. Currently, the World Bank portfolio includes 10 active projects with a total commitment of US$355.5 million. Areas of support include regulatory reform and business development, education, social assistance, e-governance, healthcare, agriculture, local roads and environment, among others.

The International Finance Corporation’s committed portfolio in Moldova is US$63.6 million (US$60.2 million outstanding). The portfolio is composed of 83 percent loans and 17 percent equity and quasi-equity. The Multilateral Investment Guarantee Agency has provided guarantees totaling US$95 million. Both institutions are members of the World Bank Group. 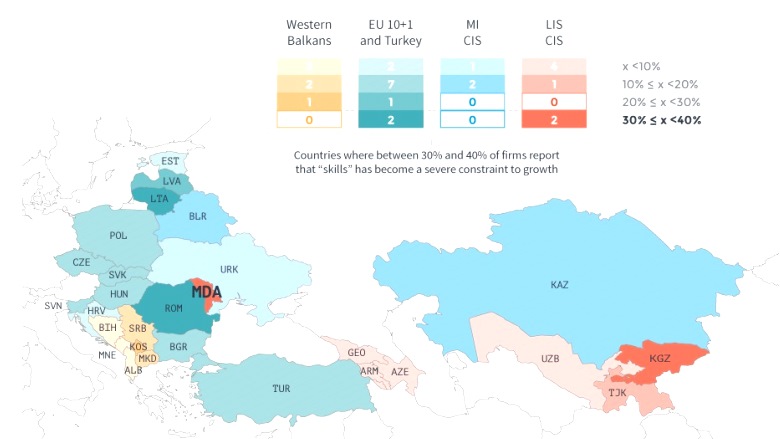 From Aspirations to Occupations