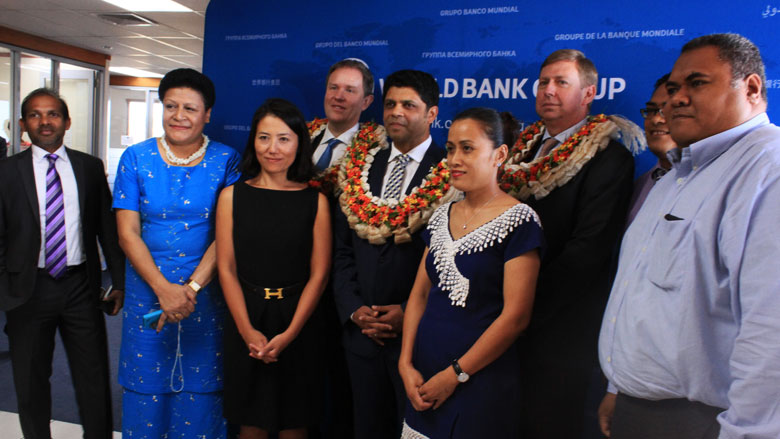 SUVA, May 24, 2016 – The World Bank Group and the government of Fiji celebrated their deepening partnership today, with the formal opening of a new office in the Fijian capital, Suva.

Guests from the public and private sectors, as well as development partners, joined in the inauguration ceremony, which included remarks from representatives of the government and World Bank Group.

“This office will strengthen our work and collaboration with the Government of Fiji,” said Franz Drees-Gross, World Bank Country Director for Papua New Guinea, Timor-Leste and the Pacific Islands. “Having a national presence will mean faster action on the ground, and a better understanding of Fiji’s unique needs and development challenges. A stronger presence in Fiji will also allow us to support other Pacific Island states more effectively.”

The World Bank already supports a number of projects in Fiji, including a US$ 50million loan for the Transport Infrastructure Investment Project, which aims to reduce the backlog of maintenance work on roads and maritime infrastructure. Following Tropical Cyclone Winston in March, the World Bank is also preparing a US$50 million loan to the government of Fiji to support the immediate recovery needs of the country’s most vulnerable people through social protection assistance and reconstruction.

“It is great news that the World Bank is moving to Fiji permanently with an office. The recommencement of loans is symbolic as we have seen a renewed focus on infrastructure development,” said Aiyaz Sayed-Khaiyum, Fiji Attorney-General and Minister of Finance. “For the International Finance Corporation we have some exciting opportunities coming up, as the Government is focused on developing the private sector.”

As a middle income country, Fiji is eligible for lending from the International Bank for Reconstruction and Development (IBRD) – the World Bank’s fund for middle-income and creditworthy low-income countries.

The World Bank Group has been active in Fiji since the 1970s. From 1971 to 1992 the government of Fiji borrowed US$153 million from the World Bank for 13 projects, which have all been repaid. Since 1980 International Finance Cooperation, the private sector arm of the World Bank Group, has invested US$28.5 million in seven projects, the most recent being a US$5 million equity investment as a cornerstone investor in Vision Investments Limited.

“We have now reinforced IFC's working relationship with Fiji and our presence reflects IFC's commitment to support the contribution of the private sector to achievement of Fiji's development goals,” said Vivek Pathak, International Finance Corporation Director for East Asia and the Pacific.

The World Bank Group’s activities in Fiji are guided by the 2015-2017 Country Engagement Note, a 24-month program to strengthen the partnership with the government of Fiji, deepen the World Bank’s knowledge base of the country and support critical investments.