WASHINGTON, April 10, 2016 – Led by robust growth in India, South Asia shows resilience in the face of turbulent international markets and remains the fastest-growing region in the world, with economic growth forecasted to gradually accelerate from 7.1 percent in 2016 to 7.3 percent in 2017, a World Bank report said.

According to the twice-a-year South Asia Economic Focus, the region’s economic performance prospects remain strong due to its limited exposure to global turbulence, coupled with increasing investment activity.

However, there are also signs of fading tailwinds. Capital flows to the region have declined and remittances from oil exporting countries have started to weaken. Fuel and food prices remain low but are unlikely to keep falling. As a result overall output growth is slower than previously anticipated and inflation has recently been creeping up.

Given its weight in the region, India sets the pace for South Asia as a whole. Economic activity is expected to accelerate from 7.5 percent in FY2016 to 7.7 percent in FY2017 based on the expectation of strong private investment, a push in infrastructure spending, an improved investment climate, and deleveraged corporate and financial balance sheets.

“South Asia has been resilient to global turbulence due to its limited exposure to slowdowns in other major economies coupled with the tailwinds of favorable oil prices, capital flows, and remittances,” said Annette Dixon, World Bank South Asia Vice President. “However, fiscal and financial vulnerabilities remain and countries should strive to address them through generating revenue and creating more fiscal space”

The report’s analysis of fiscal policy across the region suggests that governments need to find a balanced path towards fiscal consolidation.

“Fiscal policy has a wide range of impacts for development. The fiscal deficit affect macroeconomic stability, capital expenditures are needed for growth, and taxes and social spending matter for equity,” said World Bank South Asia Chief Economist Martin Rama. “With the currently low oil prices, this is also an opportune time for South Asian policy makers to introduce or expand explicit carbon taxes. This would improve environmental and fiscal sustainability at the same time.” 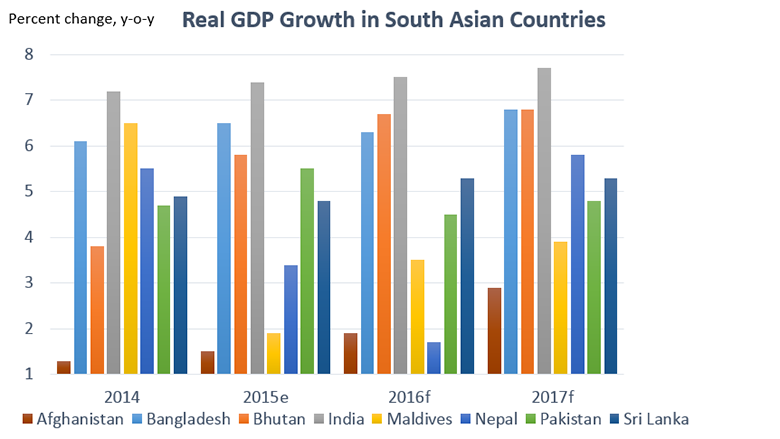 Many South Asian countries show potential for accelerated growth in the short to medium term. However, the tailwinds of high levels of remittances coupled with low oil prices may be slowing down so countries should be well prepared for a more difficult global environment.

In Afghanistan, Persisting uncertainty around the security and political environment has hindered business activities and overall domestic demand. Growth is expected to only marginally increase from 1.9 percent in 2016 to 2.9 percent in 2017. Fiscal vulnerabilities remain high and will require a large revenue effort and sustained levels of aid. Future prospects hinge critically on improvements in security tapping into new sources of economic growth and creating an enabling environment for the private sector to invest.

In Bangladesh, growth is stable and projected to rise due to increased government consumption and investment, a recovery in private investments, and an easing of regulatory and infrastructure constraints. The country should be cautious about trade and financial shocks. It should strive to boost private investment by reforming business regulations, mitigating infrastructure deficiencies and addressing financial sector weaknesses.

Economic activity in Bhutan is expected to gain momentum with Gross Domestic Product (GDP) expected to grow at 6.8 percent in 2017 compared to 6.7 percent in 2016. This solid performance is driven by new hydropower investments, government consumption, and spending. Bhutan runs a large current account deficit of which half is related to hydropower. Private sector development and asset diversification are keys to reducing vulnerability to donor finance and address rising youth unemployment.

In India, GDP growth is expected to be 7.7 percent in 2017 compared to 7.5 percent in 2015 supported by a rebound in agriculture and stimulus from civil service pay reforms. However, delays in the adoption and implementation of key reforms could affect investor sentiment. Favorable overall trends mask important underlying divergences: between urban and agricultural households; between domestic and external demand; and between public and private capital expenditure, which should be addressed.

In Maldives, GDP growth is expected to be modest at to 3.5 percent in 2016, and to 3.9 percent in 2017. Forecasts have been dragged down by a slowdown in tourism arrivals, especially from China and Russia. Fiscal consolidation and more sequencing of the investment projects is needed to contain the level of public debt. Youth unemployment with skill mismatch and lack of local economic opportunities are concerning.

After the 2015 earthquake, Nepal experienced a second major shock with cross-border trade disruptions. This reduced economic activity, lowering growth prospects to 1.7 percent in 2016 compared to 3.4 percent in 2015. Disruptions increased inflation to double digits, affecting the welfare of the poor and vulnerable, while reducing revenue collection and slowing reconstruction efforts. Normalization is expected by the end of 2016, leading to strong rebound in 2017 with GDP expected to grow by 5.8 percent.

In Pakistan, growth is projected to accelerate modestly from 4.5% in 2016 to 4.8% in 2017, supported by  growing industry and services and greater investment as well as buoyed by low oil prices and substantial remittances. Sustained and inclusive growth with further acceleration will require tackling pervasive power cuts, a cumbersome business environment, and low access to finance through the successful implementation of tax and energy reforms.

Sri Lanka’s economic growth is expected to grow at 5.3 percent in 2016 and 2017 driven by increased public investment and postponed investments in 2015. The challenging global environment has taken a toll on the economy with reduced exports and remittances; and significant capital outflows, leaving Sri Lanka with higher public debt, lower reserves and rising inflation.