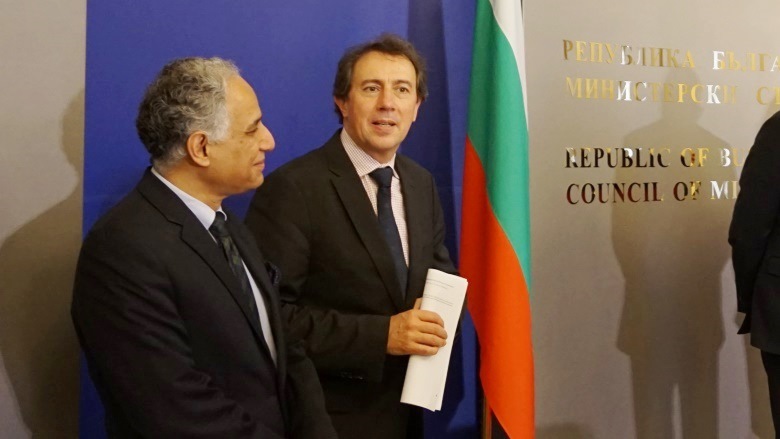 The World Bank Vice President for Europe and Central Asia, Cyril Muller (right) and the new World Bank Director for Operations in the European Union, Arup Banerji (left) during their visit to Bulgaria

SOFIA, February 24, 2015 – World Bank Vice President for Europe and Central Asia, Cyril Muller, visited Bulgaria to introduce the new World Bank Director for Operations in the European Union, Arup Banerji, and to agree with the government on the partnership framework for the next six years.

The World Bank’s future cooperation with Bulgaria will be anchored around three priority areas, namely institutions, skills, and public investment. The new Country Partnership Framework for Bulgaria (CPF), currently under preparation, is expected to cover the period of six years, but will be reviewed every two years to reassess priorities and to add or remove specific objectives and activities in the light of developments and changes in priorities.

In the first two years the World Bank will focus on supporting (i) resilience and stability of the financial sector; (ii) energy sector reforms, including energy efficiency; and (iii) Bulgaria's EU agenda in accessing and absorbing EU Structural Funds.

“The World Bank has being partnering with Bulgaria for more than 20 years in good times and in times of hardship. Going forward, we anticipate under the new Country Partnership Framework that Bulgaria will take full advantage of its World Bank Group membership”, said Cyril Muller, who visited Bulgaria upon the invitation of the Bulgarian Minster of Finance and World Bank governor Vladislav Goranov.

“As an EU member state, Bulgaria is fully equipped to achieve faster, more inclusive and sustainable growth that would benefit all Bulgarians. The World Bank team is committed to continue supporting Bulgaria in these efforts”, added Arup Banerji.

According to the Deputy Prime Minister for EU Funds and Economic Policies, Tomislav Donchev, “Bulgaria has the potential to become an investments haven, but needs to address two important challenges, namely attracting and preserving human capital and making sure that economic growth works for all. Therefore, we are working closely with the World Bank as a global leader in promoting shared prosperity.”

During the visit, a Reimbursable Advisory Services Agreement was signed with the Ministry of Regional Development and Public Works for the development of a financing strategy, regulatory capacity building and increase of service efficiency in the Water Supply and Sanitation (WSS) sector. According to the contract, in the coming 28 months the World Bank will be engaged in delivering ten outputs, such as developing WSS sector Financing Strategy aimed at promoting financial sustainability and mitigating tariff impacts on the customers. The agreement was signed by the Bulgarian Minister of Regional Development and Public Works Lilyana Pavlova and World Bank’s Country Manager for Bulgaria Tony Thompson.

World Bank Vice President for Europe and Central Asia, Cyril Muller, and Director for Operations in the European Union, Arup Banerji, also met with President of the Republic of Bulgaria, Rosen Plevneliev.