MOSCOW, February 11, 2016 - The Global Nutrition Report 2015 was discussed during the Conference dedicated to the issues of rural development, climate change and food security. The Report is a collective effort by the Independent Expert Group members, supplemented by analysts and writers from the World Bank and other institutions.

According the report’s main findings, children whose growth is stunted, people who don’t get enough vitamins, micronutrients or minerals for a healthy life, adults who are overweight and obese—malnutrition takes on many forms and affects every country.. The 2015 Global Nutrition Report (GNR) makes it clear that global progress to reduce malnutrition has been slow and uneven, despite evidence that $1 invested in nutrition can bring the equivalent of a $16 economic return.

Country profiles from the GNR 2015 show that most of the Commonwealth of Independent States (CIS) are facing overlapping burdens of different forms of malnutrition: Armenia and Tajikistan are experiencing high rates of stunting for children under five in addition to adult overweight and anemia among women of reproductive age (WRA); Azerbaijan, Kazakhstan, Kyrgyzstan, Turkmenistan and Uzbekistan have overlapping burdens of WRA anemia and overweight among adults; all CIS countries, including Russia and Belarus, are facing high and increasing adult overweight rates.

The impacts of malnutrition at an individual level are well-known: stunting affects children’s cognitive development, resulting in less schooling and lower earnings in adulthood. But the consequences of malnutrition go well beyond the individual level: stunting can cost economies the equivalent of 10% of GDP, according to the report. At the same time, obesity costs up to 4% of health budgets in Europe, and 20% of health budgets in the USA. The GNR shows that obesity is on the rise in every country in the world, with female obesity highest. The data for CIS countries mirrors this trend.

The CIS region has made significant progress over the last 20 years with stunting rates falling  considerably in Kazakhstan, Kyrgyzstan, Tajikistan, and Uzbekistan. In Uzbekistan, the reduction was dramatic, from 40% in 1996 to 20% in 2006. In Tajikistan, stunting rates declined from 39% in 2007 to 26.8% in 2012. However, this progress has slowed across the region in recent years. Armenia, for example, saw an increase in stunting from 15% in 1998 to 21% in 2010.

CIS countries also have more progress to make on exclusive breastfeeding, which hovered at around one third of the population across the region.

The region has a key opportunity to make progress on these indicators. In many countries, spending on sectors which can improve nutrition – such as agriculture, education and social protection - is rising. Adjusting programs within these sectors to factor in nutrition could bring significant gains. 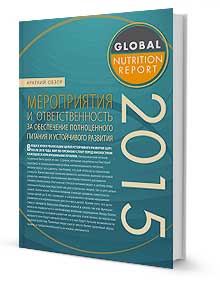 The Global Nutrition Report 2015 is a report card on the world’s nutrition, - globally, regionally, and country by country. It assesses countries’ progress in meeting global nutrition targets established by the World Health Assembly. It documents how well countries,  donors, NGOs, businesses, and others are meeting their nutrition commitments. It spells out the actions that have proven effective in combating malnutrition in all its forms. This year’s report has a special focus on climate change, food systems and the role of business. Download the report's summary (PDF): Russian / English