World Bank Forecasts a Slowdown in Migrant Remittances in 2015

WASHINGTON, October 22, 2015--Weak economies in Europe, especially Russia, are slowing the growth of remittance flows in 2015. Weaker currencies vis-à-vis the US dollar, and lower oil prices are further restricting the ability of many migrants to send money back to family and friends, according to the World Bank’s latest Migration and Development Brief.

Remittances to developing countries are expected to reach $435 billion in 2015, registering a modest growth rate of 2 percent from last year. This represents a significant slowing in the growth of remittances from the rise of 3.3 percent in 2014 and of 7.1 percent per year from 2010 -13. Global remittances, sent home from some 250 million migrants, are projected to grow by 1.3 percent to $588 billion.

Slowing remittances this year will affect most developing regions, in particular Europe and Central Asia where flows are expected to decline by 18.3 percent in 2015. A weakening of the Ruble against the US Dollar is the main cause of that decline.

Looking to 2016, the report says remittances to developing countries are expected to rise by about 4 percent, reaching an estimated $453 billion, buoyed by the continuing recovery in the United States and a modest acceleration of economic activity in Europe. Global flows of remittances are expected to recover in 2016 to reach $610 billion, and then rising to $635 billion in 2017.

The global average cost of sending $200 remained at about 7.7 percent in the second quarter of 2015. Remittance costs varied significantly by region, and within region by corridor. A major risk to the downward trajectory of remittance costs arises from the closure of accounts of money transfer operators by correspondent banks, due to concerns related to regulatory compliance.

In a major global policy shift, the recently-adopted Sustainable Development Goals (SDGs) and the Addis Ababa Action Agenda on Financing for Development endorsed improvements in migration policies, efforts to end human trafficking and promote decent labor conditions for migrant workers, reductions in the costs of remittances and recruitment, and the collection of statistics disaggregated according to migratory status.

“One out of seven people in the world is a migrant, and a quarter of them, international migrants. Migration is intimately linked to the development process,” said Dilip Ratha, head of KNOMAD and an author of the MD Brief. “The inclusion of migration and remittances in the SDGs is a welcome step forward.”

The report also provides details on remittance flows classified by region and income-levels as below. 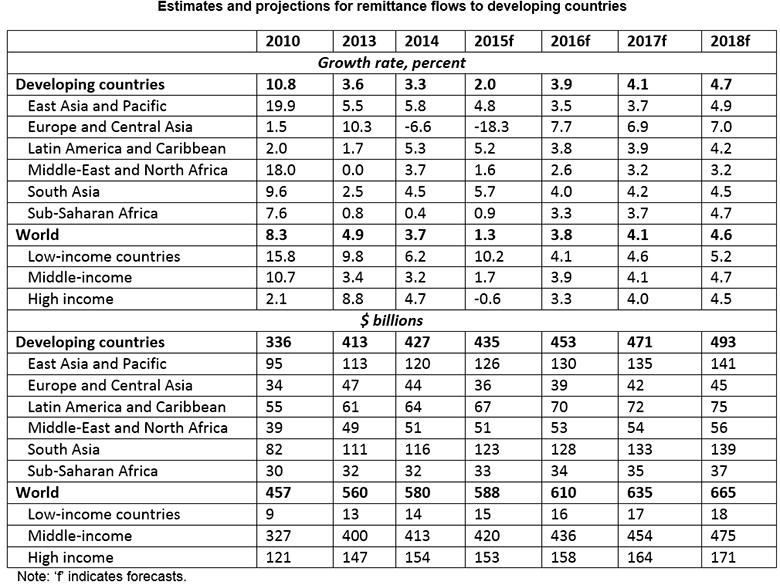 The Migration and Development Brief and the latest migration and remittances data are available at https://www.worldbank.org/en/topic/labormarkets/brief/migration-and-remittances